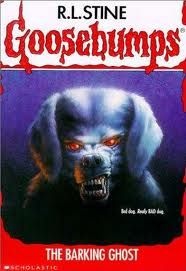 Official Book Description:
Scared of his own shadow. That's what everyone says about Cooper Holmes. But when the Holmeses move into a new house deep in the woods, scary things really do start happening. Problem is, no one believes a scaredy-cat like Cooper.
But then no one else heard the bone-chilling barking late at night. Or ran into two evil-looking dogs who disappeared into thin air...

Brief Synopsis:
Cooper Holmes and his family have just moved into a new house. At this point, I'm convinced that RL Stine's books are underwritten by Coldwell Banker. Cooper's family has moved from an urban dwelling in Boston to a house in the middle of the woods in rural Maine because of Cooper's mother's job. It's never revealed what job would require someone to live in the woods, so maybe she finally got that much-coveted Owl position at her company. Cooper is something of a scaredy-cat, but not a scaredy-dog. That's a freebee joke I threw in just for the heck of it.

Cooper is so afraid of his new surroundings that he stays up all nite thinking he sees strange, unexplainable things through his window, like a snake (garden hose), a horrible monster (bunny rabbit), or a convincing plot (Goosebumps #32: the Barking Ghost©). He hears some scuffling below his bed and when he goes to investigate, someone tries to choke him. It's his brother, Mickey. This leads to the two boys fighting on the floor, only to be interrupted by their parents, who tell them that fighting is inappropriate behavior for the first night in a new house. It's not that I don't agree with them, it just seems like an odd thing to say in an attempt to break up a sibling spat.

Once Mickey leaves, Cooper hears two dogs barking outside his window. Cooper thinks it could be Mickey again, since he is a champion dog barker. That's not a joke, apparently he is. Still, Cooper believes it could be real dogs, and this scares him because... well, because everything scares Cooper. The next morning, Cooper investigates his back yard and the surrounding woods for any evidence of the two dogs, but finds none. He decides to be brave and go into the woods.

While in the woods, he meets a strange red-haired girl (no riding hood) named Fergie who knows Cooper's name and warns him that he and his family must move away, that their house is haunted. Cooper rushes away to go tell his parents that they have to move, because, and this is his logic here, a mysterious child-waif in the forrest told him so. On the way back to his house, two labradors appear out of nowhere and chase Cooper all the way home. He tries to convince his family of the dog's existence, but they think he's lying. Cooper spends the rest of the day pouting in his room, unpacking his snow dome collection. Reader Beware, You're In For a Zzzzzzzzzz!

That night, Cooper hears barking from the living room. When he goes down to investigate, he sees a bag of potato chips torn open and scattered all over the floor. Mickey shows up and makes fun of Cooper, which is understandable. Cooper picks up and throws the gutted potato chip bag at Mickey, which only moves forward about three inches from where he threw it.

The next morning, Cooper runs into Fergie and she apologizes and admits that the chips in the living room were part of Mickey's scheme to scare Cooper. Apparently Mickey had asked Fergie to tell Cooper that their house was haunted. But once she saw how scared Cooper was getting, she felt bad. Don't worry Fergie, we all feel bad for Cooper.

He asks her if she believes him about the dogs and she says yes and they become friends and then Mickey shows up in the woods, his clothing torn open and blood all over. He laughs when they freak out and mocks Cooper by saying "You always fall for fake blood." You know what Mickey, pretty sure when you ruin your clothes and cover yourself in red food-coloring-laded Karo syrup, the joke is on you for going through that much effort.

Fergie and Cooper decide that they're going to come up with the perfect plan to get Mickey back. Fergie's family is leaving for Vermont so she stays with the Holmeses for a few days. At midnight, the two prepare to deliver revenge on Mickey with their genius plan. Cooper and Fergie tied a fake rat to a string and they're going to dangle it in Mickey's bed. That's their act of revenge. You know, I'm a pacifist and all, but even I want to kick Cooper's ass at this point.

Mickey fools them by hiding in the closet and again, countering a lame prank with a lame reaction is still, you guessed it, what Ashton Kutcher wrote in big letters at the top of his Punk'D Brainstorming Legalpad.

Cooper and Fergie see the two dogs running around the house and Cooper insists that the two go out and investigate. This leads to the two ghost dogs holding them captive outside their house, and then dragging them to a shack out in the woods. Fergie thinks they should go ahead and see whatever it is that the dogs want to show them. The two dogs shove the two kids into the shack, where they fall down a well or something. Then the dogs start speaking to them. Of course they do. The dogs tell them that they're inside the Changing Room and since the two kids took in more than 6 items to try on, they are going to be forced to switch places with the dogs. See, the ghost dogs were originally humans who were turned into dogs and so they've been waiting for two humans to trick into going into the Changing Room so they can take over their human form. Oh of course that's what was going on, it seems so obvious now!

Fergie and Cooper turn into dogs. The dogs turn into Cooper and Fergie. As dogs, Cooper and Fergie communicate telepathically and try to find a way to tell Cooper's parents that they're not really dogs. Cooper tries telling them directly, but it comes out as, let me quote, "Woof woof woof woof woof." The two dogs then try running around and barking some more, which only frustrates the Holmeses. Cooper and Fergie do finally scare Mickey, but it seems of small consolation, given that they're now dogs. In a truly brilliant scene, the ghost dogs re-break into the Holmeses house and Cooper tries to write a letter to his parents but discovers that dogs can't write. The parents show up and ask the dogs "Didn't we just tell you to get out?" Amazing.

In a final act of desperation, Cooper hears the fake-Cooper telling his parents that he hates liver, when infact actual Cooper loves liver. Realizing that this is his chance to convince them that he's the real Cooper, Cooper-Dog runs into the house and eats the liver from the plate. This plan also fails because, well, duh.

Finally, Cooper and Fergie decide the only way to get the two humans back into the Changing Room is to drag them there. So they do, and the parents follow behind the two kids getting dragged away by giant dogs, calmly noting that it should be interesting to see what the dogs want to show Fergie and Cooper. What a wonderful book.

The dogs throw the humans into the Changing Room and two humans and two dogs exit...

But the Twist is:
...but still not the real Fergie and Cooper. Seems there were two squirrels in the Changing Room, so their dog bodies switched places with the squirrel bodies. That's nuts.

the Platonic Boy-Girl Relationship:
Cooper Holmes and Margaret "Fergie" Ferguson, whose successful revenge-calculating skills disappear half-way thru the book with that whole "rat on a string" plan.

Questionable Parenting:
When Cooper and Fergie suddenly show an interest in playing frisbee, maybe that should have been the parent's clue that their son and his best friend were really dogs in human bodies. Oh wait, no it shouldn't have.

Early 90s Cultural References:
Snow domes were the POGS of this generation, right?

Foreshadowing Alert:
Early in the book, Cooper sees a dog's reflection when he looks in the stream. But this makes no sense if you think about it.

Memorable Cliffhanger Chapter Ending:
Oh this is a great one.
Ch. 3/4:
"For the zillionth and third time, I gazed out the window. But for the firsttime, I couldn't believe what I saw."
...
"I didn't see anything."

Great Prose Alert:
The only two scary books I ever read took place in Maine. In the woods.