Goosebumps: The Blob That Ate Everyone (Book Review) 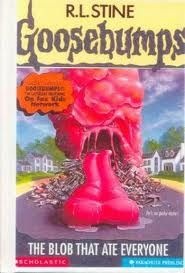 Front Tagline: He's no picky eater!
Back Tagline: Read It And Scream!

Official Book Description:
A famous horror writer. That's what Zackie Beauchamp wants to be. He's writing a story about a giant blob monster. A pink slimy creature who eats up an entire town!
Then Zackie finds the typewriter. In a burned down antique store. He takes it home and starts typing.
But there's something really odd about that typewriter. Something really dangerous. Because now every scary word Zackie writes is starting to come true...

Brief Synopsis:
In a refreshingly brisk change of pace, RL Stine starts this book out with a cliffhanger ending on the very first page. A character says she doesn't believe in monsters, and the narrator interjects that this was followed two seconds later by their being attacked by a monster. Look, two seconds is a really short period of time. Say "two seconds" out loud. See? There it is. Now, you're telling me that this monster, whatever monster, attacks with both rapid convenience and polite hindsight as to let this girl finish her thought? COME ON RL STINE, I EXPECT A LITTLE MORE OUT OF A BOOK FOR KIDS THAN THAT.

The narrator is Zackie Beauchamp. His best friend is a girl named Alex Iarocci. I read an interview when I was younger and still followed RL Stine's magazine appearances where Stine said he got the names for his characters from his son's yearbook, so I'm not entirely convinced that maybe Stine's eyes wandered off the page and IAROCCI is like HAGS or LYLAS (I Am Running Out of Competent Character Ideas?). Anyways, Groucho Stine continues to let Zackie Beauchamp (ugh I don't care, there is no way in hell I'm typing that full name out again) tell us the reader know that names are important, because Zackie himself forgot his own name when he was attacked by the Blob Monster!

Then a blob attacks Zackie and Alex but it turns out it is really a story that Zackie wrote to entertain his friends during a boring Spring Break day. Alex likes the story a lot. Zackie's other friend, Adam Levin, mocks it in ways that make my job oh so easier. Zackie reveals his goal in life is to be a great horror writer. Zackie, I have a tip for a pen-name: anything else.

Adam makes a big deal about how he never gets scared, then gets scared by a cat. Poetic Justice, thy name is Stine.

Later that night, Zackie and Alex stumble upon an entire block of a small shopping center that has been destroyed by lightening. Zackie sees a sign on one of the dilapidated buildings that says "Danger-- Keep Out," and his first instinct is to keep in. He forces Alex to join him inside the abandoned and crumbling storefront. Alex sanely suggests that maybe a flooded and gutted building is not a good place for two twelve year old kids to go snooping, but before Zackie can nay-say her, he gets shocked by a loose wire. Alex tells him his whole body was encased in a blue flame. I don't think that's how electrical shocks work.

Zackie spots an old typewriter in the shop and decides he will take it. Taking antiquated items that don't belong to them from dangerous and mysterious settings, that always works out well for characters in these books.

A woman enters the abandoned store and whoa whoa whoa she is a black woman. The woman shines her light on the two kids, who huddle down to hide from her because they are white suburban kids and this is the first black person they've seen in real life. Upon being hit with the light, Zackie pretends to be a statue and this fools the woman. But then she comes back because she's not a complete idiot, physically accosts both Zackie and Alex, and angrily asks these two kids if they are "doing some late night shopping." Well, if they are customers, she probably shouldn't have assaulted them. She introduces herself as Mrs. Carter, and tells the kids that this was her store. Zackie sees the pain in her eyes at losing her shop and decides that this is the perfect time to ask if he can have the typewriter. She gives it to him and also gives him a free pen. I wonder if this small, unusual, seemingly unimportant detail will prove to not be so inconsequential once the story commences.

Zackie's parents naturally make fun of him upon his return home, though only about the whole wanting a typewriter thing. He sets the machine up in his room and it begins to bathe in a blue glow. This causes him to excitedly utter one of the better lines in this series, "My typewriter!"

At school the next day, Zackie tells Alex about the blue glow, and how he's going to retype the Blob story on the creepy typewriter, because then that will make the story even scarier. Because that's how typewriters work.

Zackie opens his locker and a mouse that Adam jokingly placed inside his locker jumps out at him. He gets scared and some people laugh at him. After everyone laughs at him, Alex helpfully picks off the mouse hair from his shoulder. What.

That night, Zackie is still obsessing over his embarrassment. He tells Alex that people were making "mouse faces" at him all day. It's okay, I don't know what that means either.

Zackie starts writing the new draft of the Blob story on the typewriter. Zackie's new first line is "IT WAS A DARK AND STORMY NIGHT" and this causes the sky outside to suddenly pour down rain all over his red dog house. The power goes out in the house, but Zackie tells Alex that he's going to keep writing, since all great horror writers should write by candle-light. "Cool" is her response, so she must not have been listening. Zackie's next line is "THE WIND BEGAN TO HOWL." And guess what happens in real life? That's right, Hurricane Katrina. Thanks a lot Zackie, hope your Blob story was worth it.

Zackie's next line states that Alex and Zackie were all alone in the darkened house. But whoops, Zackie forgot about dear old Dad down in the basement, who has now disappeared. Alex tries to convince Zackie that everything he's typing is coming true, which should take no convincing since it is, but Zackie is stubborn because all great horror writers are stupid. Then Zackie literally defines the word "coincidence" for both Alex and the reader. He should have just typed that we'd already know what it means. Alex grabs Zackie's handwritten draft and types the next line of the story: "THEY HEARD A KNOCK ON THE DOOR." Then there's a knock on the door.

When Zackie goes to answer the door, there is no one there, so Zackie sits down at the typewriter and writes that Adam is at the front door. And so he is. Zackie types the storm ending to prove to Adam that his typewriter can control reality. Adam mocks Zackie and grabs hold of the typewriter. Adam writes that the blob monster is waiting in Zackie's basement for some fresh meat, then turns and runs out of the house. The kids suddenly hear a series of thuds leading from the basement... the door opens... and it's merely Zackie's dad. Alex drags Zackie down into the basement to see whether or not there is in fact a blob monster waiting for them. There's not.

The following Saturday, Zackie's mom sends him out to pick up some food items. Zackie apparently decides to stop off in 1958, as he goes into a local meat market run by friendly Italians. Adam embarrasses Zackie again, this time by pretending to be a blob monster inside the meat market maybe? I don't know, at this point I basically skimmed the book looking for words in all caps. Zackie gets mad and goes home to write a third Blob story, about the giant blob eating the whole town. Zackie's mom interrupts his story and asks him to return to the market for a loaf of bread. Zackie bikes back to the market and sees... a giant blob attacking the whole town. A random woman tells Zackie as she's running away that, and I'm quoting here, "It's a horrible monster!"

The blob monster begins to eat various police officers and citizens in the manner which Zackie has already written. As the carnage is unfolding, Zackie tries to remember exactly what he had written so as to predict what occurs next. Naturally, Zackie's had already typed that the blob monster followed him home. I'm starting to think that this kid deserves it.

Zackie races home but then he remembers that he wrote himself falling off his bike. See?

Alex and Zackie continue to run from the monster towards Zackie's house. Once inside, the two race towards the typewriter as the sound of the blob monster entering the house fills the living room where Zackie fails to get the typewriter to function. The blob monster bursts in and swallows the typewriter before Zackie can type a word. Zackie suddenly remembers the pen the woman gave him. Maybe it has the same powers as the typewriter! But we'll never know, because the blob monster eats it too. Zackie and Alex are trapped. Zackie remembers how when Adam wrote something on the typewriter it didn't come true. Maybe Zackie doesn't need the typewriter at all, maybe the power to change things is within him? It's totally worth a shot Zackie, go for it! And so the finale of the book is a teenage boy thinking really hard. It works, everything goes back to normal.

the Platonic Boy-Girl Relationship:
Zackie Beanoimnottypinghisnameoutagain and his female friend Alex Iarocci, whose other friend Adam disappears halfway thru the book into a blob monster's mouth because he thinks it's a balloon. Still makes sense.

Minority Alert
With three whole pages of coverage, Mrs. Carter is the Cosby Show of minor Goosebumps characters in her important and inspirational role as the black shop keeper who shows up and then goes away. Well done Stine, you've met your quota of one minor minority character with six or fewer lines per year.

Enthusiasm Alert:
Zackie on the free pen he recieved: "What a great pen. It writes so smoothly."

Fake-Out Foreshadowing Alert:
Zackie tells us he forgot his name when he faced the blob monster, but then that didn't happen. Maybe he meant that we the readers are all trying to forget his name.