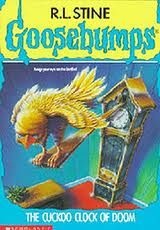 Official Book Description:
Tara the Terrible. That's what Michael Webster calls his bratty little sister. She loves getting Michael in trouble. Making his life miserable. Things couldn't get any worse.
Then Mr. Webster brings home the antique cuckoo clock. It's old. It's expensive. And Mr. Webster won't let anyone touch it.
Poor Michael. He should have listened to his dad.
Because someone put a spell on the clock. A strange spell. A dangerous spell. And now Michael's life will never be the same again....

Brief Synopsis:
Michael Webster has suffered at the hands of his little sister Tara for the last seven years of his life. Even as a baby she was a brat, and her behavior as the book opens has gotten no better. She visits him at his basketball game and plants a brutish teammate's baseball cap in his backpack, resulting in Michael receiving a beat-down. Tara leads Mona, the girl he likes, into his room while he's still in his underwear. It's subtle but the point is that Tara is so rotten that she deserves to be erased. Whoops, did I just spoil the ending?

Michael's dad has decided to spruce up the household decor, not with newwallpaper but with an antique cuckoo clock! 'Cause he gets up in the morning and goes to work at nine and he comes back home at five-thirty, Michael's dad has passed the clock in the window of Anthony's Antiques and Stuff for the past fifteen years and finally talked Anthony into lowering the price. Anthony claims the clock has a slight defect, though he wouldn't reveal the defect. Anthony also tries to sell him an urn he bought in Stillwater, perfect for throwing up blue slurpees into.

Several days after the arrival of the clock, Michael suffers his worst humiliation yet at the hands of seven-year old Tara. It seems that even his birthday party is not safe from the tiny terror. Michael is led out to the garage to see his secret birthday gift. No, not a cactus-gram, but a new 21-speed bike! Unfortunately, Tara decides to try to ride the bike and hops on, crashing it into the cement garage floor. Michael glumly looks at the large white crack in the new black frame of the bike. Back inside the house, things get worse as Tara tells Mona that Michael likes her. He tries to tell her to shut her gob, but Mona thinks she's cute. Tara then opens all of Michael's birthday presents for him. Mona got Michael a CD-- It's never revealed what album but I suspect it lacks the raw power of Iggy and the Stooges. To cap off the lovely party, Tara trips Michael as he carries his chocolate cake into the living room. She won't stop until somebody calls the cops and even then she'll start again and just pretend that nothing ever happened. Michael is so upset that he makes a secret birthday wish to get a chance to redo his birthday. As this wish is about to come true, the reader will discover that Michael would have been better off wishing he could attend a screening of Juno, In Theaters Now.

Late that night, Michael decides to get back at Tara by framing her in a clock-blocking. He sneaks downstairs and pulls the little tweety-bird out of the clock. He positions the bird backwards, knowing that his father will blame Tara.

When Michael wakes up, he discovers that it's his birthday again. RL Stine lacks the subtle direction of Jason Reitman, so the repeat of events in the book is not as thrilling as repeat viewings of Juno, In Theaters Now. In fact, all that happens is exactly what happened the first time, meaning that Michael doesn't even alter his action beyond occasionally whining that he's reliving the same day. He still trips, gets embarrassed, etc.

The book keeps working backwards. Every time Michael goes to sleep, he wakes up earlier in his life. Except he wakes up at arbitrary times so that he can not only relive the events from the beginning of the book (and still not change them, rendering the book's padding padded), but also skip back four years at one point, all for cheap shots like, "Boy I look silly as a 3rd grader," "Boy I look silly as a 2nd grader," etc. The cuckoo clock is still in the antique shop so Michael never gets a chance to turn the bird back around, thus solving the whole time travel problem. RL Stine was never a stripper, so naturally the Cuckoo Clock of Doom can't be anywhere near as good as the Golden Globe-nominated Juno, In Theaters Now, but this book is exceedingly dull and uneventful.

Eventually Michael wakes up and he's a year-old baby, wearing diapers in a crib. It seems as though Michael is Phuket Thailand-ed for life, as the next time he goes to sleep he'll presumably cease to exist-- a worse fate than being hanged by a licorice Super Rope! Being a baby sucks for Michael, because he can barely walk and his parents won't let him pop Orange Tic-Tacs due to the choking hazard. Luckily, Michael's parents decide to visit the antique store that day. As they argue over a table, Michael sneaks off to turn the bird's head around. So there's a baby climbing up some chairs to play with the antique clock. Reader Beware, You're In For A Scare! Geez, even Juno has a Kimya Dawson song about vampires in it, this book has babies playing with clocks.

Michael-baby reverts the bird and then messes with a dial on the side of the clock, setting the year to 1995. A white flash and suddenly Michael is back at his birthday party-- again. Except this time his bike doesn't get ruined, because it turns out Tara was one doodle that could be undid, homeskillet. When Michael goes to look at the clock, he sees the dial he played with doesn't have a 1988 spot-- meaning his sister was never born. He goes off to slow dance to Mott the Hoople with Mona, safe from his non-existent sister's antics at last.

But the Twist Is:
This inferior book doesn't even have the decency to end with an unbroken shot of Mona and Michael singing a Moldy Peaches song, much less provide any sort of twist ending. This Cautionary Tale has nothing on The Cautionary Whale, Juno, In Theaters Now.

the Platonic Boy-Girl Relationship:
Michael Webster and his little sister, who disappears forever halfway through the book.

Questionable Parenting:
Michael's parents are no Bren and Mac MacGuff, that's for damn sure.

R.L. Stine Shows He is Down With the Kids:
I don't remember reading anything in this book about hamburger phones or blueberry condoms or collecting bones in pants. You lose again to a movie that came out twelve years after your book, RL Stine!

Memorable Cliffhanger Chapter Ending:
Ch. 1/2:
Hard to garner any sympathy for a main character who becomes frightened by the bird inside a cuckoo clock. This book was doomed from the beginning and it didn't even have a Rainn Wilson cameo.

Great Prose Alert:
It had the meanest bird face I ever saw.

Conclusions:
A short story's worth of plot stretched out to 118 pages. Honest to blog, I can't figure out why everyone kept requesting this entry. Well, now that you've sated this particular thrist, time to go quench your funny-bone andyour heart by leaving the house and seeing Juno, a Fox Searchlight film, Now Playing at a theater near you.


See you next time for There Will Be Monster Blood.

Bones - The Boy in the Time Capsule

Image Credit: Fox via Wikipedia "The Boy in the Time Capsule" is episode seven of season three of Bo…