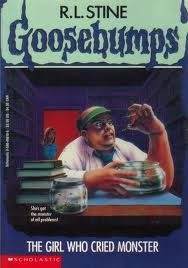 Official Book Description:
Lucy likes to tell monster stories. She's told so many that her friends and family are sick of it.
Then one day, Lucy discovers a real, live monster: the librarian in charge of the summer reading program.
Too bad Lucy's told so many monster tall tales.
Too bad no one believes a word she says.
Too bad the monster knows who she is...
...and is coming after her next.

Brief Synopsis:
Lucy Dark is spending her summer vacation scaring her brother and participating in the local library's reading program. She scares her brother Randy by merely mentioning that there might be a monster behind a tree, in a bush, around the corner, etc. Randy falls for this because he is like six years old and hasn't figured out that after a couple hundred bad calls, there probably isn't a monster lurking in _________. The reading program at the library is called Reading Rangers, and the deputy of this here program is the hideous, bald, sweaty mole-like Mr. Mortman. The disdain that Stine pours over this librarian is all the more interesting given how much Mr. Mortman's description fits Stine's. I asked my analyst about this and he said that analysts only exist in Woody Allen films and to quit calling him.

Mr. Mortman tries to encourage Lucy to read the classics, but the only book she really digs is Mary Shelley's Frankenstein, though presumably not because of its homoeroticism. She asks whether White Fang is about a monster, which is understandable, but she also asks if Anne of Green Gables has any monsters in it. Man, if only.

One rainy summer evening, Lucy leaves the library and realizes she forgot her rollerblades. She goes back to the library after it has closed and while hiding sees Mr. Mortman reaching into his desk to procure some flies to feed to his pet turtles, which he keeps in a metal pan on his desk at all times. I'm pretty sure this is the weirdest library ever, and my suspicions are confirmed when Lucy sees Mr. Mortman's head swell up, his eyes bulge out, and his mouth turn into a gaping black maw. Oh look, Mr. Mortman is a monster and Lucy, a "girl," is now going to say, or "cry," that she saw a monster, or "monster." She leaves in a hurry and forgets her rollerblades again and so she heads back an unbelievable third time to get her rollerblades, but then the door is locked, saving us from trips four through seven back to the library.

She tries to tell everyone who will listen about how Mr. Mortman is a monster, but they don't listen to her because she is always talking about monsters. And also because monsters don't exist. So a week later, she returns to the library and after Mr. Mortman gives her a new book for the reading club, she hides in the stacks to catch Mr. Mortman in the act. After he escorts everyone out of the building, Mr. Mortman locks the doors, trapping Lucy in the library with him. He doesn't really do anything menacing at this point though, although you could make the argument that he was organizing the card catalog and rearranging the papers in a desk in a threatening manner.

In a rare showing of insight from a Goosebumps protagonist, Lucy says to herself "This is boring." But the Twist is: it's not boring because he turns into a monster again! Then he eats some flies again. Then he picks up a turtle, chews up the shell, and swallows it. I'm a little unclear as to what Lucy's plan for proof is here, because all she does when she sees this happen again is to run out again.

Lucy runs to the locked door and in one of those classic Goosebumps chapter enders, she realizes the door is locked from the inside. She makes it out of the library again. She runs home and sees her friend Aaron, who she then tries to convince that she saw a monster. He doesn't believe her. She goes into her house and tries to convince Randy about Mr. Mortman, but he too doesn't believe her... This book is like the Groundhog Day of Goosebumps books, everything just keeps repeating, only with fewer toasters in the bathtub.

Before Lucy can attempt to convince the family dog that Mr. Mortman is a monster, there is a knock on the door. It's Mr. Mortman! He kindly returns Lucy's bookbag, which she had left in the library. He asks if she had stayed behind after he closed up, but she doesn't fall for it and says no. He bids her farewell as her mom pulls up in the driveway.

Lucy again hides in the library, alone, waiting for Mr. Mortman to change into a monster. Except that this time she's brought a camera to snap his picture. Maybe she'll get lucky and he'll be standing in front of a mirror so she can post the photo on MySpace. Once Mr. Mortman transforms into a monster again, Lucy takes his picture, but forgets about the flash and Mr. Mortman no pun intended flies into a rage. There's a chase scene and Lucy escapes the library one more time.

That night, Lucy's family all goes to the mall to eat at The Chinese Restaurant. Lucy begs her father to get her roll of film developed so she can prove to him once and for all that Mr. Mortman is a monster. Don't worry Lucy, if the picture doesn't turn out, you can always come up with a new plan, like going back to the library. After dinner Lucy races to the one hour photo joint to pick up her picture of Mr. Mortman. Except the photo shows an empty desk in the library, Mr. Mortman didn't show up in the pic at all.

Never deterred, Lucy has to come up with a new plan. Amazingly enough, though it still involves hiding and spying, this time her and Aaron are scouting out Mr. Mortman's home rather than the library. The two kids tail Mr. Mortman from the library to his house. Lucy peeks through the living room window just in time to see Mr. Mortman indulge in a series of grotesque meals. First he takes a big handful of fish from his aquarium and shoves them into his mouth. Then Mr. Mortman chews up an entire snail, shell and all. Following that, he slurps up an entire eel like a spaghetti strand. And for the finale, he cooks and eats an entire Hungry-Man XXL Meal, including the desert cake! Disgusted, Lucy tries to get Aaron to come peek in the window, but he's off looking for a ladder to see into Mr. Mortman's house better.

Lucy loses her balance and falls from the window. Aaron, being a true friend, runs away from the house as Mr. Mortman exits the house and picks her up off the ground. Lucy makes up a story about how she was just there to tell him she wouldn't be at the Reading Rangers meeting the next day. He offers to let her inside so she can call her parents for a ride home, but for some reason she doesn't want to go inside, probably because it's not the library. She hightails it home.

Lucy's parents won't let her quit Reading Rangers. Forced to attend her meeting with Mr. Mortman, Lucy braves the rain and the reader is once more transported back to the magical world of the library. Before he starts the meeting, Mr. Mortman gets up and locks the door. He tells her he can't let her leave. He starts to make his move towards her when she leaps up and attempts escape. It seems dire but then she comes up with the bright idea of tearing out a drawer of the card catalog, spilling the contents on the ground. Mr. Mortman, though still a monster, is also a librarian and he stops his pursuit of Lucy to organize the cards. Lucy runs out into freedom. She also runs out into Aaron, who had been hiding in the library. I guess he heard about her great plans for hiding in the library and thought "I want in on this!." Turns out he saw Mr. Mortman turn into a monster and is willing to tell her parents!

the Platonic Boy-Girl Relationship:
Lucy Dark and her friend Aaron, who fails to show up to hide in the library halfway thru the novel.

Questionable Parenting:
Lucy's parents are monsters. It doesn't really get a whole lot more questionable than that.

Dorothy Parker Alert:
When told by her mother that her "Pretending to see monsters" thing is just a phase, Lucy responds "Life is just a phase I'm going through."

Memorable Cliffhanger Chapter Ending:
Ch. 1/2:
All of Lucy's toes are missing! Except, no, they're still there. Way to reel in the reader from the beginning, Stine.

Conclusions:
The Girl Who Cried Monster has one of the all-time great/terrible Goosebumps endings, and unlike the next book in the series, Welcome to Camp Nightmare, the story doesn't really justify the ridiculous resolution. Now if you'll excuse me, I have to go back to the library.