Graham Nash: " It All Comes Down to the Music"

Close your eyes and listen in your mind to the Hollies song "Bus Stop". Now segue into "Carrie Anne". From there change your cerebral channel and tune into Crosby, Stills, Nash and Young singing "Our House," or "Suite: Judy Blue Eyes," or "Marrakesh Express." The one voice that is instantly recognizable above all the others is that high tenor weaving harmony like golden threads into a musical fabric, the voice of Graham Nash.

Nash began his career in England as a member of the British Invasion Band The Hollies. Known for their melodic compositions and intricate harmonies, they found success both at home and abroad. It was in fact on tour in America with The Hollies where Nash first met Stephen Stills and David Crosby. The rest as they say was history with the three musicians forming to release their first album "Crosby Stills and Nash" in 1969. They followed that up with the addition of Neil Young and the release in 1970 of their chart-topping classic "Deja Vu."  A constant staple of AOR radio throughout the 70's, The band in various incarnations as CSN or CSNY toured, recorded and embraced the rock and roll lifestyle with open arms. The drama and chaos that ensued is now chronicled in a new book written by Nash titled "Wild Tales: A Rock and Roll Life."

Musician, photographer, entrepreneur and activist, Graham Nash is a survivor of the beast that is Rock and Roll. He recently sat down for a very candid interview with #InTheLab host Arthur Kade and spoke in depth about the band, the drugs, the women and most importantly, the music. Now in his 70's. Nash felt the time was right to share these stories admitting that he has "No reason to lie."  The journey the band has taken together throughout the years may have been contentious at times yet they still make music together on occasion and their friendships endure. In the end, as Graham Nash eloquently summarizes "It all comes down to the music." 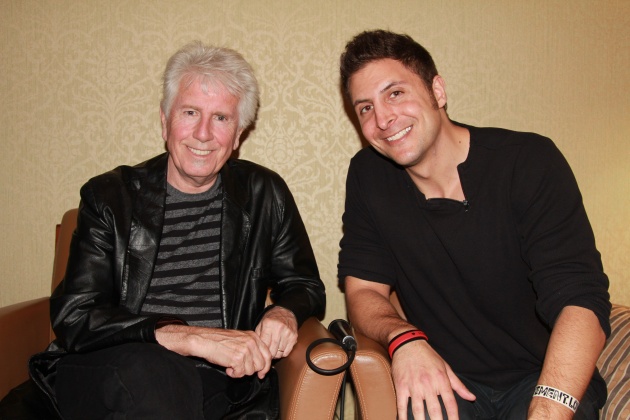