Halloween: The Tradition of Scary Fun 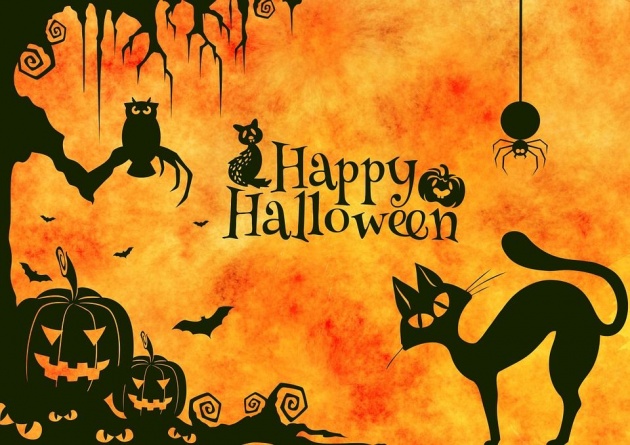 “O­ne obvious question about Halloween is, "What does the word itself mean?". The name is actually a shortened version of "All Hallows' Even," the eve of All Hallows' Day. "Hallow" is an Old English word for "holy person," and All Hallows' Day is simply another name for All Saints' Day, the day Catholics commemorate all the saints. At some point, people began referring to All Hallows' even as "Hallowe'en" and then simply "Halloween."[1]

People celebrate Halloween on 31 October in the evening. From very start it was most popular in the Canada and America but now millions of people are celebrating this day and it’s getting popular across the world and now even in Pakistan Halloween is celebrated by some universities, colleges and on the public level with their friends and family as well. On that day people mostly young generation and children wear different costumes, make their faces horrible with painting art and go to the people’s houses. Here they say “Trick or treat" to ask for candies and sweets. People give yummy :P candies to them. On that day People dress up as witches, ghosts or other scary things for Halloween. 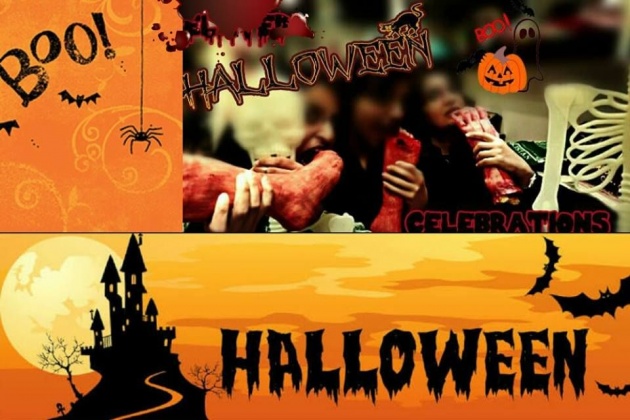 Image Source: A picture from the album of my previous Halloween celebration with my friends

The true origin of Halloween comes from the ancient Celtic festival which was known as Samhain. This festival was celebrated at the end of harvest season and the beginning of cold and dark winter, and a time of year which was often linked with human death. Celts believed that the boundaries between worlds of the living and the dead became thinnest on the night before the New Year. They also believed that the spirits of dead people returned to earth in the form of ghosts and these spirits roamed in the streets of villages at night. Celts thought nature of these spirits were evil, so they left gifts and treats for them to pacify the evil and ensure next year’s crops would be plentiful.

Priests also build huge scarifies bonfires, and people gathered to burn animals and crops for the purpose of sacrifices. On that festival, the Celts wore animal heads and animal skin as their costumes. 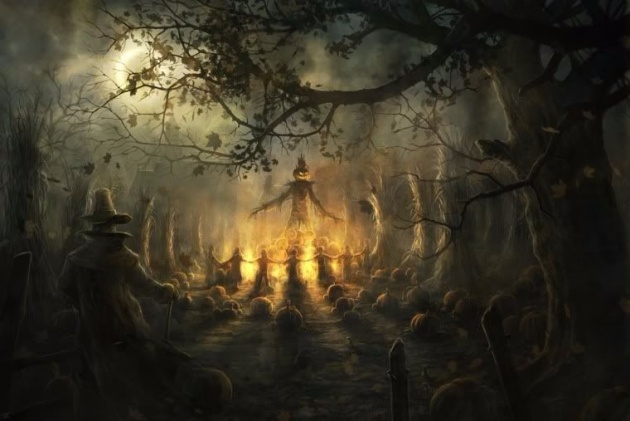 By 43 A.D, the Roman Empire had occupied the majority of area of lands of Celtic. They (Romans) ruled approximately four hundred years on the lands of Celtic, Roman combined two festivals [2]“Feralia”(the commemoration of the passing of the dead) and “Pomona”(the Roman goddess of fruits and trees). As the symbol of Pomona is the apple which might have been combined with Samhain by the practice of "bobbing for apples".[2]

In 9th century, when Christianity’s influence had spread into Celtic lands here it combined with the older Celtic rites. In 1000 A.D on 2nd November Priests celebrated this day in Churches as Souls’ day, a day to honor dead people. All traditions of Souls’ day were similar to Samhain festival, but church gave officially holiday on that day. 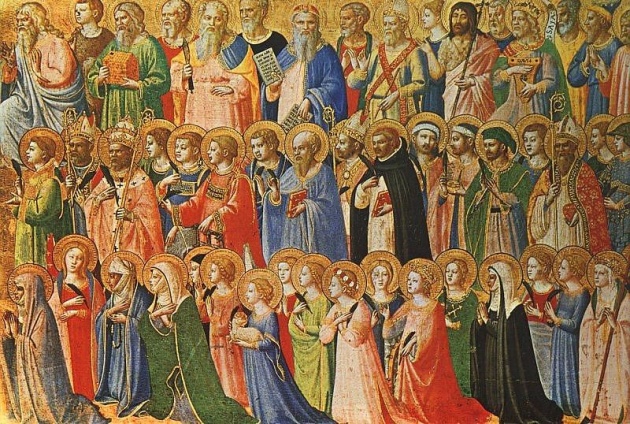 Celebration of Halloween was just limited to New England (colonial) because some of its rigid belief systems. It was also much common in Southern Colonies and Maryland. But when different customs and beliefs of European ethnic groups and the American Indian combined, a new modern American version of Halloween began to emerge.

In 1800, on the day of Halloween American people arranged get to gathers parties with their neighbors. In these parties both Adults and children participated. Children focused on different games, festive costumes and foods, while parents enjoyed with talking to each other. At that time from the start of the evening of 31st Oct till all night, people celebrated different parties with their neighbors by singing and dancing. They shared stories about ghosts and dead people to each other and also told about their fortune.

In 1846, the Irish fleeing from the potato famine, they helped to introduce the celebration of Halloween nationally. By combining of these both Irish and English traditions American introduced “trick or treat” tradition.

But in 19th century, when lots of new immigrants came to America these immigrants were mostly belong to Ireland. From 1920 to 1930, Halloween became secular. In 1950, leaders of towns changed Halloween as a holiday aimed at the young to limit vandalism.

Still Halloween was not celebrated everywhere around most of the countries like in old days people celebrated it on a small scale by inviting children from their neighbors to give them treat in form simple food and gifts. But now, it was estimated six billion had spent annually by Americans and also other countries where Halloween considered as cultural event.

Today’s most popular Halloween tradition, not only in America but some other countries is “Trick or Treat”. This tradition was popular in 9th century and they dedicated this festival to dead people and named Souls’ Day. During the festivities poor citizens begged food from rich people. They gave them (poor citizen) pastries named as “Soul Cake” and promised to them in return they want pray for their dead relatives or family members. This festival (Giving of “soul cakes” to poor citizens) was encouraged by Church as well. This tradition is still celebrated in some countries.

Wearing different costumes on Halloween festival, basically this tradition was adopted from Celtic and European roots. Hundreds of year ago people considered winter as frightening and an uncertain time. On that time, people afraid from dark and especially in winter. Due to the short days of this season their food supplies often ran low, because they spend their time in home. On Halloween festival, people were believed that ghosts would come back to earth, and they (ghosts) would encounter with us if we left our homes. Because of these thoughts, people wore different masks and costumes to avoid being recognized by these ghosts. On Halloween, people also left food outside of their homes. Firstly, they could not enter their homes and secondly to appease the ghosts.

As superstitions have become a part of human life and day of Halloween has always remain superstitious, mysterious and magical. Not only in old times but still people believe on them. There are lots of superstitions about Halloween. From all of them I am going to share most popular and interesting superstitions.

Black cat is often considered symbol of “Bad Luck”. From Halloween point of view black cats have often been identified as witches’ familiars. On Halloween, if a black cat cross your path it considered witch is near around you. If on Halloween you hurt a black cat you will have 7 years of bad luck, or if black cat meow to your near window it is considered a death will soon occur in your family.

Bats are also considered a symbol of ominous.Same like black cats, bats have often been identified as witches’ familiars. On Halloween if bat is flying around your house it is considered your house is haunted by an evil spirit and ghost. “OMG I am feeling horrible :o”

[3] It is considered that if on Halloween night you encounter a spider it means that spirit of deceased love one is watching over you.[3]

One other interesting Halloween superstition is, “midnight of Halloween”. If you put your clothes on inside out and walk backwards you can see the witch (witch riding on the broomstick) is flying in the sky. 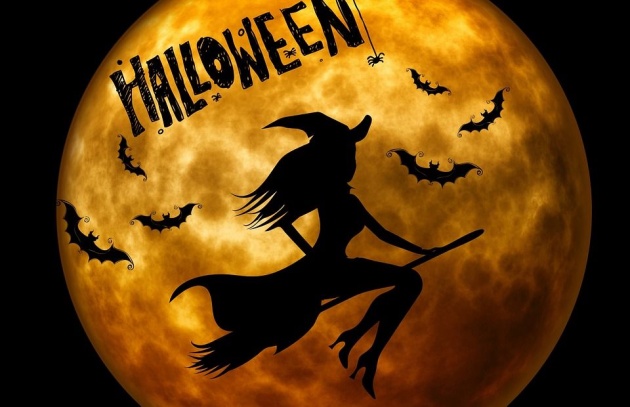 On Halloween night if you listen footsteps behind you, you should not look back. Because it is considered the voice of footsteps may be of the soul of dead person. If you do this you will dead soon.

Owl is also considered superstitious on Halloween because it eats dead souls. On Halloween if a person hear the voice of owl he/she should to turn his/her pockets inside out, doing this he/she will safe from danger.

If a baby born on Halloween people say he/she has ability to communicate with spirits and also read dreams.

On Halloween night, if a girl put an apple under her pillow she will see future husband in her dream.

On Halloween night, if flame of candle becomes blue during performing religious activities, it means evil spirit is near to you. “Feeling creepy seriously :O”

Nuts, apples and candles are considers symbols of magic charm.

According to another strange superstition, on Halloween night you should go to crossroad. The reason is that to listen the scary sounds of wind here. During listening of wind sounds, it is myth that you may hear the things which will happen to you in next coming 12 months.

On Halloween night if you see a ghost, first of all you will be considered as a lucky person. But you should make sure ghost walks around nine times because of doing this it will disappear quickly. "isn't it strange guys :P"

Now on Halloween, people celebrate this day with their families and friends. On this day and before this day, people planned parties. Youngsters watch horror movies and also dressed different costumes designed on theme of grim reaper, mummy, witch, wizard and vampire. On Halloween night people also decorate tree inside or outside the homes. It is a great way to give a pretty spooky look in and outside the house. At night, trees look really scary & it seems trees are possessed by evil spirits.

Children make their faces horrible with face painting and wear different fancy dresses. Children also visit to their neighbors and demand gifts, sweets and snacks. They also warn their neighbors if they will not entertain them accordingly then they do some harm to their family. This is known as “trick or treat”. 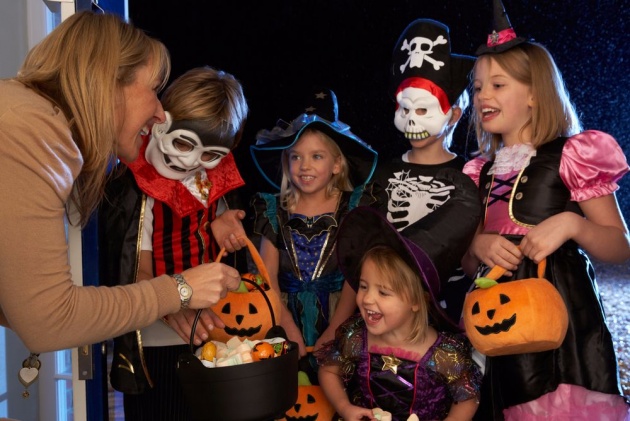 People also make Jack O’ Lantern. For making this lantern they use pumpkin and they use this lantern to keep away the evil spirits from them. On Halloween people also keep ready a bowel full of sweets, candies and gifts. If anyone who knock at the door people give them these items. Doing this, it will help you to please the little spirits in your neighborhood.

How Halloween is Celebrated Around the World

As month of October has started and bitLanders is going to celebrate Halloween with their users. This credit goes to the whole team of bitLanders as they always remained involve celebrating upcoming events. For celebration of Halloween, bitLanders had offered beautiful and scary items like spooky tree, black cat and outfits etc. for both girls and guys ;D. If you will buy these items you can increase in your buzz score through available offers on these interesting and charming items. You will get 1 bonus buzz on each items for five days. 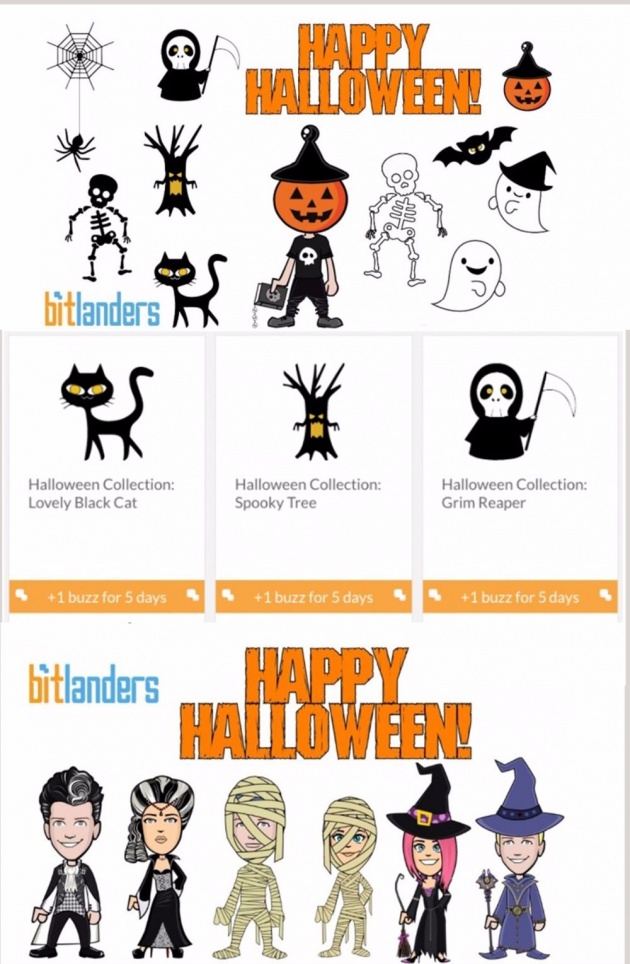 Well, I am going to celebrate this Halloween by buying these items which are available on bitFashionista store and will raise my buzz score. So like me you guys can also avail the chance of increasing of your bonus buzz through buying these interesting and charming items with celebration of Halloween Day.

So Happy Halloween Day in advance to my BitLanders family. ^___^

Thanks for sparing time in reading My 29th attempt for my virtual home "BitLanders".... Stay Connected for more articles.....  ツ