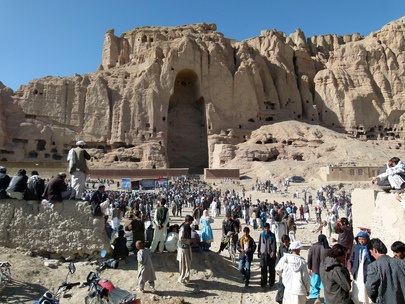 From the UN & Diplomatically Incorrect, wishes for peace and unity that lies at the core of Nowruz, the spring festival marking the Iranian New Year. Originating in Iran’s ancient history, Nowruz is celebrated by more than 300 million people worldwide on 21 March, the day of the spring equinox, which marks the sun’s crossing of the Equator and the start of spring in the Northern Hemisphere. “Each Nowruz showcases the world’s diversity and offers an opportunity for deepening the ties that bind us all together. It is a day to celebrate the value of mutual respect and the aspiration for harmony held by all societies,” offered UNSG Ban Ki-moon. The Nowruz holiday was recently added to the Representative List of Intangible Cultural Heritage of Humanity administered by the UN Educational, Scientific and Cultural Organization. In 2010, the UN General Assembly declared 21 March the International Day of Nowruz. “For centuries, people from the Middle East and Central Asia have applied the Nowruz spirit to the dark challenges before them. This noble tradition has been passed from generation to generation, with its deep philosophical heritage and message of universal humanitarian values,” the President of the General Assembly, Abdulaziz Al-Nasser of Qatar said in remarks delivered by the Acting President of the General Assembly, Uruguay’s Ambassador José Luis Cancela, during an event on Tuesday evening to commemorate the occasion. “In establishing International Nowruz Day in 2010, Member States reaffirmed their ongoing commitment to dialogue among civilizations and to promoting solidarity, peace and prosperity. This spirit makes Nowruz far more than just a New Year celebration. It reminds us that, with seven billion people living on this planet, we must work together to build a truly united global partnership; a partnership in which all of humanity can advance and prosper.” See more at our Popular Video Blogs & Current News Event Articles at www.diplomaticallyincorrect.org By Ambassador Muhamed Sacirbey – Follow @MuhamedSacirbey Facebook = Become a Fan at “Diplomatically Incorrect” Twitter – Follow us at DiplomaticallyX UN Photo-Nowruz Celebrations in Bamyan, Afghanistan: Afghans gather at the site of where the Buddhas of Bamyan once stood during celebrations for Nowruz, the first day of spring and the Afghan New Year.