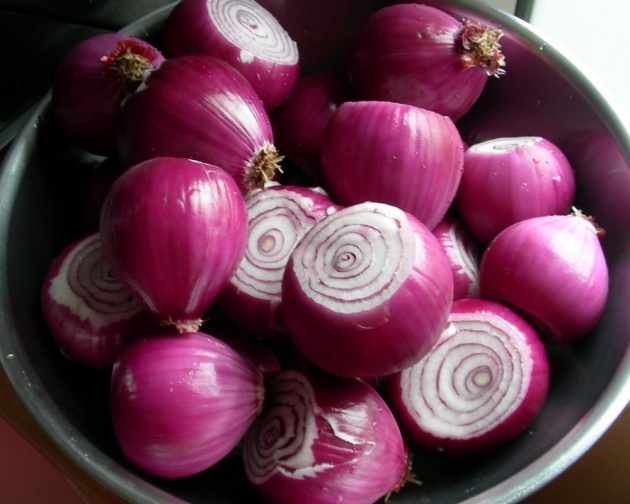 1. Blood Sugar Stabilizer
Sulfur-containing compounds in onions (and garlic)–the stuff that makes you cry–have been shown to reduce blood sugar and cholesterol levels.
Onions are a prime food source of the mineral chromium that is necessary for regulating blood sugar. The fiber, potassium, and other phytonutrients also support the production of insulin, the substance the body produces to regulate glucose in the blood.

3. Dark Spots on the Skin
After washing, rub red onion directly on dark spots on the skin to lighten hyperpigmentation. The flavone (a type of phyto-antioxidant) quercetin induces the production of melatonin, one of the hormones responsible for (among other things) skin pigment. By rubbing onion on the spot, normal pigment genesis is promoted.

4. Detoxification
The sulfur in onions promote the production of glutathione, a powerful antioxidant. It activates enzymes in the liver to help flush out toxins. That, in combination with quercetin, have been shown to alleviate toxicity in the body.

5. Immune Support
In addition to antioxidant and other phytonutrient content, onions are a good source of vitamin C. This vitamin has been found to kill every virus known to humankind. Onions themselves are antibacterial; eating them may prevent gastric ulcers by preventing growth of Heliobacter pylori, the bacteria that cause them.

6. Insomnia
Weird, yes, but for some, it works. Cut into a raw onion and breathe deeply five to ten times immediately before lying down to sleep. It will help you to fall asleep.

7. Menstrual Cramps
Onions contain the amino acid cysteine, which is an antecedent to critically-important glutathione. This antioxidant soothes muscle pain and relieves stress, prevents cell damage, and supports liver function. Eat some raw onions every day four to five days before your period starts to alleviate cramps. Don’t worry about your breath–people probably won’t want to be around you at that time of the month, anyway.

8. Nosebleeds
At the start of a nosebleed, slice an onion and hold it under your nose; the fumes are a natural coagulant and will stop the bleeding.

10. Pimples
Rubbing a slice of onion on your face every day can heal and prevent pimples without scarring. No harsh chemicals means your skin won’t dry out and you can expect no harmful side effects (assuming you’re not allergic to onions). In addition, onion extract has been found to improve the appearance of existing scars.

11. Sex Drive
It’s an irony at which you can only shake your head and wonder…the allicin in onions (and garlic), because it promotes blood flow, is also known to increase libido. Just make sure your partner eats it, too, so s/he doesn’t notice the pungent smell. Parsley is a natural breath freshener.