SOILS
all the materials that blankets the rock crust of the earth.
Products of disintegration of the rocks of earth’s crust.
May be defined in terms of principal agencies:
- residual soil: lies above parent material from which it is derived.
- aeolian soil: formed by action of wind
- glacial soil: formed by glacier
- sedimentary soil: settling of soil particles from a suspension existing in the river.
May also be described in terms of amount of organic matter in soil.
- in organic soil: in which mineral portion (soil particles) predominates.
- organic soil: in which large amount of organic matter is contained. It is readily identified by dark brown to black color and distinctive odor.
Sand (coarse or fine)
Gravel (natural pit or river banks)
Silt (fine grained soil or low to medium plasticity, size in between sand and clay. Little cohesion and undergo shrinkage and expansion with change in moisture content). Organic silts contain high organic matter and are unstable.
Clay (very fine grains of 0.002 mm or finer. Medium to high plasticity, considerable strength, undergo extreme changes with moisture content.)
- lean clay: term used for silty-clay or clayey-silt.
- Fat clay: fine colloidal clay of high plasticity
Loam: term used in agricultural sciences. Fairly well graded from coarse to fine. May be classified as sandy loam, silty loam, clayey loam.
Loess: fine grained aeolian soil which is uniformly graded, predominantly silty.
Muck : soft silt or clay, very high in organic content, found in river or lake bottom.
Peat : composed of partially decomposed vegetable matter. High water content, woody nature, high compressibility makes it undesirable for foundation.
Basic soil properties
Moisture content
Specific gravity
Unit weight
Shearing resistance
Permeability: property of soil mass that permits water to flow through it under the action of gravity or some other applied force.
Capillarity: property that permits water to be drawn from free water surface through the action of surface tension and is independent of gravity force.
Shrinkage: reduction in volume that occurs when moisture content is reduced from partially saturated or saturated soil.
Swelling: increase in volume due to increase in moisture content.
Compressibility: property of soil that permits it to consolidate under action of applied compressive load.
Elasticity: property of a soil that permits it to return to its original dimensions after removal of applied load. In pavement design, resilient modulus is used to describe the elasticity of soil.
Coarse Aggregates
Particle size and gradation
Hardness or resistance to wear
Durability or resistance to weathering
Specific gravity and absorption
Chemical stability
Resistance to wear
Materials should be hard and resist wear due to the loading from compaction equipment, polishing effect of traffic, and the internal abrasive effect of repeated loading.
LA Abrasion test.. Speed of 30-33 rpm, 500 revolutions, sieved on # 12 sieve.
Difference between original and final mass is reported as percentage of original mass and is % of wear.
Durability or resistance to weathering
Measure the resistance to disintegration in saturated solution of sodium or magnesium sulphate, removed and dried in oven.
It simulates weathering of aggregates that occur in nature.
Repeated for number of cycles, normally 5.
After repeated wetting and drying, aggregates are divided into fractions by sieving and % weight loss is determined for each fraction.
Chemical Stability:
Certain aggregates may be unsuitable for use in highway construction due to unwanted chemical composition.
Some aggregates that have affinity for water may contribute towards film-stripping, leading to dis-integration of asphalt concrete.
Static immersion test
Immersion-compression test
Bituminous materials 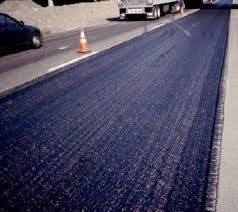 Extensively used in highway construction, due to:
Excellent binding or cementing power,
Water-proofing properties
Relatively low cost.
Consists primarily of bitumen, which, according to ASTM D8, class of black or dark colored solid or viscous cementitious substances, composed chiefly of high molecular weight hydrocarbons and soluble in carbon disulphide.
Divide mainly in two classes: Asphalts and tars
Asphalts are residues of petroleum oils, normally crude oils.
Natural deposits are also available, called as native asphalts.
Tars are residues from destructive distillation of organic substances such as coal, wood, petroleum etc.
Such tars are crude and must undergo refinement to become road tar.
Difference between tars and asphalt
Asphalts have no odor, are more resistant to weathering and less susceptible to temperature than tars.
Tars have pungent smell and react to weathering and temperature.
Asphalt will dissolve in petroleum oil while tar will not.
Tars have been used to seal asphalt surface to improve oil resistance of asphalt.
Asphalt are black while tar is brown-black in color.
Tars are not usually used in highways.
PRODUCTION OF ASPHAlT
Crude oil is heated and introduced in large cylinder still.
Steam is introduced to aid in vaporization of more volatile components.
The residues are fed into vacuum distillation unit where heavy gas oils are further separated.
The fraction left from this unit is vacuum-steam refined asphalt.
Consistency can be further modified by some other processes.
Air Blowing
Air blowing is done to increase the viscosity of asphalt produced by vacuum process. (e.g. in roofing asphalt)
Asphalt from vacuum process is pumped into chamber, where temperature is raised to about 260 to 300 celcius.
Air is introduced in the chamber and blown through the asphalt for several hours until the desired viscosity is attained.
Done in either batches or continuously.
Batch air blowing is done for roofing asphalt while continuous air blowing involved lesser degree of oxidation and is used for paving asphalt cement.
Cutback Asphalt
Asphalt from vacuum process exists as a semi-solid at room temperature and proper workability can be attained by re-heating it to 120 to 165 celcius.
To make them workable at room temperature without resorting to heat, they must be rendered liquid at room temperature.
There are two ways:
Dissolve (cut) the asphalt in solvent
Emulsify it in water (will be discussed later)
When volatile solvent are mixed with asphalt to make a liquid product, the mixture is called as “cutback asphalt”
After cutback asphalt is exposed to air, the volatile solvent evaporates in air and asphalt regains its original viscosity.
The rate of cutback asphalt curing is from few minutes to several days depending on volatility of solvent.
Three types of cutback asphalts and solvents:
Rapid curing (RC) (gasoline or naphtha)
Medium curing (MC) (kerosene)
Slow curing (SC) (road oil)

Have you ever had that feeling of getting inspired after watching a certain movie? Or maybe after a …