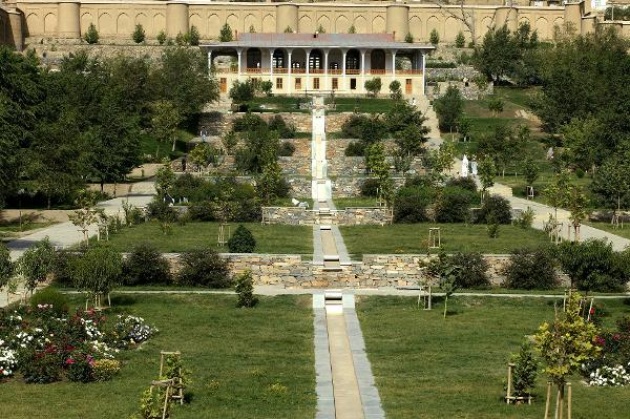 The 11-hectare terraced garden on the western slopes of the Sher-e-Darwaza Mountain south of Kabul was laid out by the founder of the Mughal dynasty, Muhammad Zahir al-Din Babur (1526-1530). It was his favorite among the ten gardens that he built in and around Kabul, and he decreed that it be his final resting place. Babur was buried in Agra upon his death and was reburied in the Kabul garden by 1544. Both Babur's grave and the garden have seen significant transformations in subsequent years, and since 2002, the Aga Khan Trust for Culture (AKTC) has been engaged in restoring the site in collaboration with the Deutsches Archäologisches Institut (DAI).

The present garden extends over fifteen orchard terraces that descend westward towards the Kabul river. The overall layout is rectangular in plan, with an extension containing a caravanserai and another containing the burial terraces at the foot and head of the central axis. The site measures about three-hundred meters at its widest (north-south) and four-hundred and sixty meters at its longest (east-west).

History of the Garden

Although the exact layout of the garden in Babur's time is not known, it was probably organized around a central water channel in the manner of Timurid char baghs that Babur had admired in Samarkand and Herat. Excavations reveal a structure on a lower terrace which dates back to the Indo-Greek and Kushano-Sasanian periods, and there may also have been a Timurid garden and cemetery on the site. Shah Jahan's extensive investments in Bagh-e Babur are described in the Badshahnama, which mentions pools on 12 terraces along the central axis, linked by waterfalls and marble-lined channels. There is mention of a caravanserai (whose foundations have been excavated) at the foot of the central axis, and of the marble mosque erected by the sultan below Babur's grave. The chronicle lists the addition of three reservoirs (near the entrance, and on the ninth and tenth terraces) and a monumental gateway with gilt cupolas, the footings of which were excavated by the DAI in 2004-2005.

Bagh-e Babur fell into disrepair during the decline of the Mughal Empire, and its structures were badly damaged in the 1842 earthquake. Amir Abdur Rahman Khan invested in the garden in the late nineteenth century and refashioned it in a European manner. A garden pavilion was built over the central axis, which was remodeled with seven parterres and fountains. At the same time, a large palace was built in the southeast corner of the garden. Bagh-e Babur became a public park during the reign of Muhammad Nadir Shah (1929-1933). A large modern swimming pool and greenhouse were built in the 1970s. The site was badly damaged during inter-factional fighting in 1992/3, when most of the trees died or were cut down for firewood. The garden was re-opened to the public in the spring of 2002, at the beginning of restoration works implemented by the Aga Khan Trust for Culture.

By: A F Salehi

A F Salehi graduated from Political Science department of International Relation Kateb University Kabul Afghanistan and has about more than 8 years of experience working in UN projects and Other International Organization Currently He is preparing for Master degree in one Swedish University.

International day of Nawroz march 21 Nawroz is the beginning of New Year in solar Hijri calendar. It…

As I have written about how to bring peace in Afghanistan, in my past blog. Today I want to show the…

Matches for Afghan women’s premier league have been started and will continue for a month. They…

Leela Corman studied painting, printmaking and illustration at Massachusetts College of Art. Below i…

Last week was another great week for Film Annex and Women's Annex here in New York and in Herat, Afg…