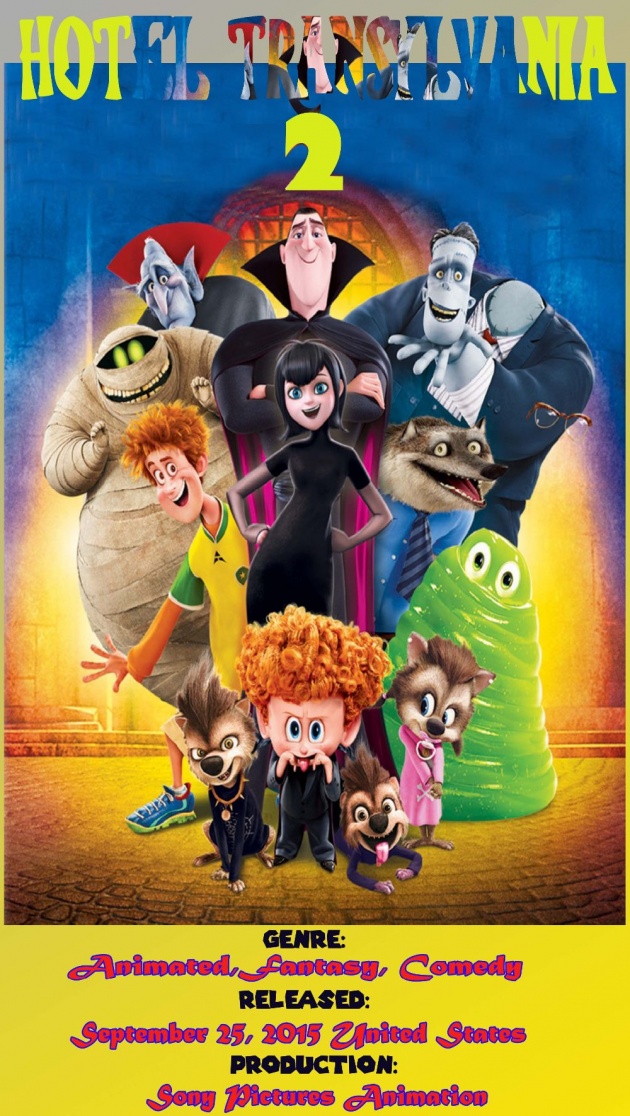 Hotel Transylvania 2 is the American 3D animated computer movie. It is the second chapter of Hotel Transylvania which was released in September 2012. The film was written by the combined efforts of Robert Smigel and Adam Sandler. Although it is animated movie, but I think now a days it’s been a trend to watch these films with equal interest, as we see the other films. So let’s start to know some other details of this fanciful movie.

Tartakovsky planned that Hotel Transylvania 2 is going to be release in October 2012 but nobody was writing the script, and due to his commitments on other films, he was unable to direct the movie. As a result the film released on September 25, 2015 by Columbia Pictures in the United States.

On the other hand, the film was produced by the one of the biggest production company of U.S which is Sony Pictures Animation. Michelle Murdocca is the Producer of the film.

The director of the movie is Genndy Tartakovsky. If we talk about the budget of the film, it costs around $80 million which is pretty luxurious for the animated film.before we going to start about it's cast and story, Let's have a look on the trailer.

As you know that it is an animated movie, so categorically it’s necessary to discuss the Character’s voices.

I have mentioned almost all characters with their voices of the movie.

let’s start the story. After the first chapter, with the consent of her father Dracula, Mavis married with her fiancé Johnny, As the World turn out to be conscious of the reality of Freaks. Then Mavis tells her father that she is heavy with child and after one year, she gives birth. Her son name was Dennis. After some time Dennis’s grows with childhood friend Winnie, Wayne’s daughter. On his fifth birthday, so far Dennis had not grown his teeth. Due to this, Dracula worries, that Dennis has not still gain the Powers of Vampire. On this matter, Mavis decides to raise his son Dennis with Johnny in Transylvania despite of Dracula’s displeasure. 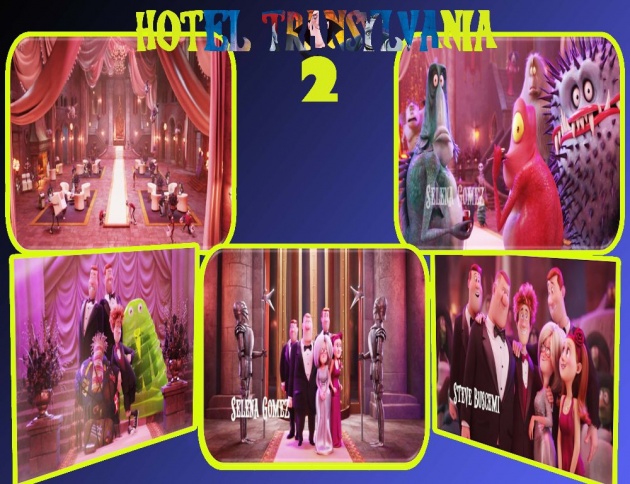 Dracula says Johnny to visit their in-laws, Linda and Mike and take Mavis with him to California but Johnny never wants to leave the Hotel Transylvania. Dracula wants to leave Dennis with him. Meanwhile, Dracula plans to train his grandson Dennis to become a monster. In order to do this, Dracula recruits his friends Frank, Griffin the Invisible Man, Wayne the Werewolf, Blobby the Blob and Murray the Mummy to help him. Dracula takes Dennis to a summer camp, where he improved his monster abilities and realized that the camp is safer. After that Dracula unwittingly tosses Dennis from an unbalanced tower to force him to convert into a bat, but he fails and Dracula saves him on last second. The whole stunt was captured by the campers. Later the film was uploaded on the internet. Sooner or later Mavis sees the film of stunt and both Mavis and Johnny decides to go back to Transylvania. 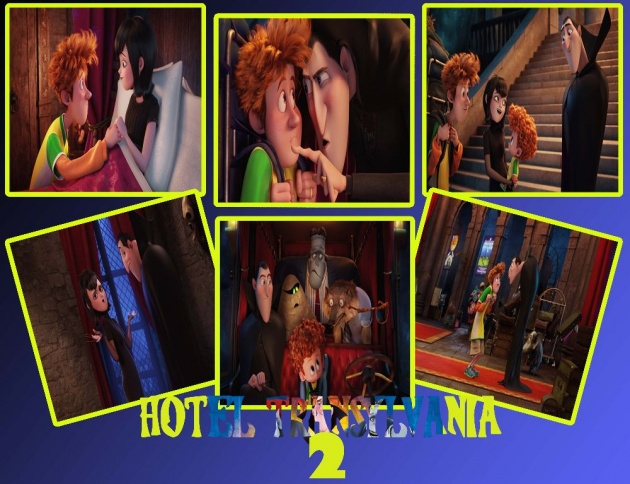 Due to non-availability of flights, Mavis transforms herself as a bat and flies by carrying Johnny and reaches Transylvania. At the same moment, Dracula comes to the hotel after Mavis. Mavis provokes Dracula and says he has put Dennis in serious risk and to accept his failure as a human. Furthermore, she says her father that by taking promise with his father to leave the hotel after Dennis fifth birthday.

Mavis sends invitation to her Grandfather Vlad on the occasion of Dennis fifth Birthday. When it comes to human beings, Vlad is much inferior. Dracula says to Johnny that human celebrators masquerade as freaks. Eventually Vlad reaches with his servant Bela who is horrific bat and it is Vlad first meeting with his grandson. He trusts that anxiety will cause Dennis’s teeth to develop. So he owns dressed as a Stage Performer Freak which is Dennis Favorite. In order to shock Dennis, the cake freak Kakie tries to scare Dennis but at the last moment Dracula protects Dennis and reveals the trick to his father Vlad, who is irritated with the attitude of Dracula that acknowledged human guests in the hotel and defies his own father by saying that now humans are different. 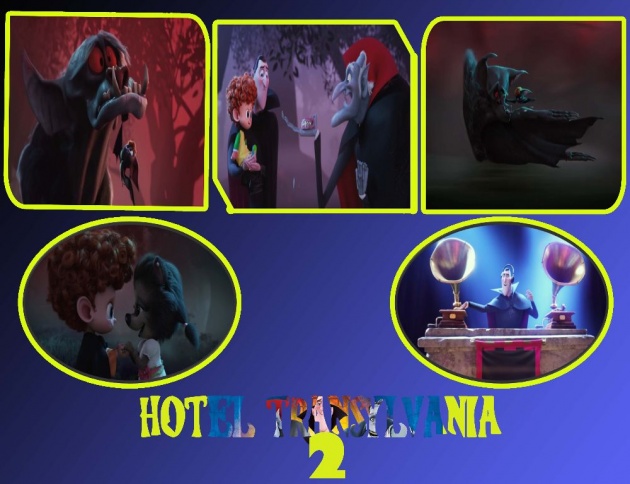 On this family disputes and her grandfather’s actions, Mavis turn out to be sad. Dennis absconds from the hotel and after that enters in to the forest with company of Winnie. They both hides in the Tree house. Bela attacks on both of them, as a result Winnie injures. Dennis rage causes him to transform into vampire. He then starts fight with Bela, who calls his huge bat sycophants. Mavis, Dracula, Dennis and some members of Johnny’s family tries to defeat the huge bat. A furious Bela tries to kill Johnny with rod but Vlad saves him and won over Bela and the huge bat.  After this Dennis gains his abilities of Vampire. Mavis still wants to raise Dennis in Hotel Transylvania and the party still continues.

Now it’s review time for the movie. I’m amazed to see that movie scored 56% rating on the basis of 92 reviews, which is pretty exceptional. Even though it is an animated movie but it’s a comprehensively enjoyable & remarkable for the spectators and marginally better than its first Chapter Hotel Transylvania.

Now it’s time for the honor of Hotel Transylvania 2 and I’m disappointed to see that the film was chosen for some categories but only won one award for the voice of Selena Gomez and the result of 2016 Kid’s Choice Awards to be announced very soon.

Though it is animated movie, but in the world everything have some purpose behind their existence. so, I got the message that every human being has its own ability and characteristics, and it's is in your hand, how to develop and maintain that special characteristics. Similarly in the movie, that Dennis belongs to the family of vampire and he realizes his ability  too late. I think that's the positive message from the movie for everybody.

In the end let's enjoy the title song of Hotel Transylvania 2.