Hello bitsters, I am sure you haven't seen me writing often about politics as I do when it comes to sports. But how do I keep myself away from writing on the situation which had created the uncertainty for almost a year in my country? Yes, that was the Panama Leaks who got tired the whole country just after it was being released. In case, if you don't know what Panama Leaks are, you will come to know later in this blog. It wasn't only Pakistan but the World who affected after its release. However, in Pakistan, it becomes more important and iconic day by day and resulted in the political crisis. Let's first talk about the definition of Panama Leaks and try to know its background.

What are Panama Papers?

We've heard about many secret document leaks whether they were WikiLeaks or any other etc. Same like these Panama Papers are 11.5 million leaked documents (also known as Panama Leaks) which consist of detailed financial information and attorney-client buy and sell of around 250K offshore companies. This collection of documents contain personal and private financial information about the wealthy individuals and offshore companies which haven't disclosed before or had kept private previously. While knowing that offshore companies are legal, the team of journalists found that some of the Mossack Fonseca entities were used for tax evasion, money laundering, fraud and violation of International sanctions. 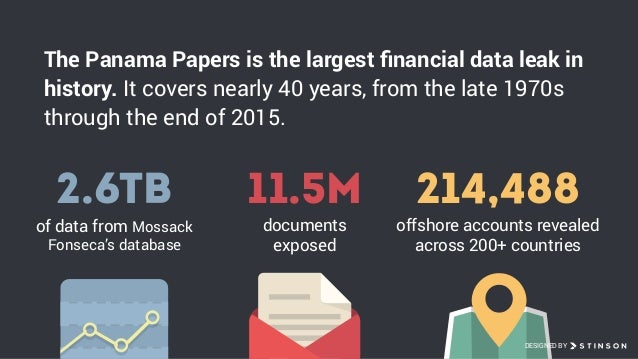 These 11.5 million secret documents were prepared by the International Consortium of Investigative Journalists (ICIJ) to be known as Panama Leaks made to the public on 3rd April 2016. The documents were sourced from the Panamanian Law firm Mossack Fonseca, which included the details of eight offshore companies related to the Sharif family including the former Prime Minister of Pakistan and his younger brother Chief Minister of Punjab Shahbaz Sharif. According to these papers, the children of Nawaz Sharif Maryam Nawaz (daughter), Hussain Nawaz (son), and Hasan Nawaz (son) were the beneficiary owners of the 5 offshore companies in which the two Neilson and Nescol were used to buy flats in London's most expensive Mayfair apartments. These leaks breathe a new life into the allegations of corruption that the Sharif family has long been haunted by.

On the other hand, the Panama Leaks haven't made trouble only for the Pakistani Prime Minister, it also consists some big names of the World includes the famous Bollywood star Amitabh Bachan, father of the Former Prime Minister of U.K Mr. Ian Cameron, Prime Minister of Iceland etc.

The list of famous people whose names appeared in Panama Leaks.

As I said in the beginning, after the release of Panama Papers, the Panama Leaks got tired the whole World under its storm. Public figures like Bollywood star Amitabh Bachan were denied those documents and termed them false and unmatched.

While when it comes to the politicians who are answerable to their people, the former Prime Minister of U.K David Cameron after being pointed by the people and authorities disclosed his all tax returns and business records from his grandfather to him.

The people of Ice Land came out to protest against their Prime Minister back in 2016.

Same like Ice Land happened in Pakistan except for the people who came out on streets to record their protest. The Prime Minister of Pakistan along with his children's accused in Panama Papers for holding the offshore companies.

Impact of Panama in Pakistan.

Former Pakistani Prime Minister with his sons and a daughter.

It was mighty obvious that after the Panama Leaks, a storm definitely had to break out in Pakistan. On 4th April 2016 just a day after the Panama Leaks, the daughter of the Prime Minister of that time tweeted and called these allegations a ‘distortion of information' and categorically denied herself of being the beneficiary owner of any company named in the leaked documents.

It wasn't as easy as its seeming, things started getting worse for the Sharifs. On 5th April 2016 the under pressure Head of the family and state, the Prime Minister of Pakistan (now former) Mr. Nawaz Sharif decided to address the nation on the issue of Panama Leaks. The Prime Minister begins his speech with the acknowledgment of the fact that he is only addressing a personal matter because he owns the status of the head of the state. More on the allegations he said, he is ready to face the Judicial Commission to probe his family's alleged flats and offshore companies.

But the storm still hasn't stopped for the Sharif's, the idea of formation of Judicial Commission becomes useless when the opposition parties and the ruling party failed to reach out at any solution regarding the terms of references (T.O.R's).

My family was involved in Politics before we got in Politics. In fact, we were an established industrial family, when we entered into the politics. – PM Nawaz

Whereas the leader of the Opposition Party and Chairman Pakistan Tehreek – e – Insaaf Imran Khan wants the Government to form an inquiry commission based upon the serving Chief Justice of Pakistan [now former], Anwar Zaheer Jamali. Where the ruling party, in contradiction with the Opposition was keen on having ex-Supreme Court judges to inquire the probes. Unfortunately, they both again failed to reach any conclusion because the petition of Imran Khan to form a commission was rejected by the Supreme Court and the ex-judges of Supreme Court refused to lead the inquiry which was a huge setback for the ruling party.

On April 22, 2016, the Prime Minister again addressed the nation and said,

The Prime Minister adress to the nation.

By trying at every forum to investigate the probes, Imran Khan when didn't get any appropriate response announced to lock down the Country's capital city Islamabad by staging a sit-in protest in the whole city to pressurize the government to present themselves for the allegations made in the Panama Papers. On the other side, Government was ready to tackle the plan of Opposition leader Imran Khan and started a crackdown on his party workers few days before the lockdown.

The Islamabad Police seems ready to tackle the protestors.

During these worst days of collisions between Political workers and the local police, the Imran Khan's party re-filed another petition along with Jamat-e-Islami's Chairman Siraj-ul-Haq in the Supreme Court to investigate the probes on PM's family. However, fortunately, the Court approved their petitions for hearing and ordered the opposition parties to hold their horses back and to follow up the case.

On October 2016 the Supreme Court of Pakistan has formed the commission which consists of a five-member bench to probe the Panama Papers allegations on PM Nawaz Sharif's family. This hearing keeps on almost for five months where both the parties were given enough chance for their hearings and to submit their proofs and evidence. Now, all wait was for the judgment of the Supreme Court.
Wait, it's not finished yet!

The five-member bench of the Supreme Court announced the verdict of Panama Case at 2:00 PM P.S.T on 20th April 2017. The result found to be very bizarre as the verdict divided into the 3-2 ratio. The 2 out of five judges of the bench thought that Prime Minister is insufficient to hold the office, where the remaining ordered for further investigations through Joint Investigation Team (JIT).
The opening statement of the detailed 540 long page Panama Case verdict quoted the famous saying from the film ‘God Father':

"The secret of a great success for which you are at a loss to account is a crime that has never been found out because it was properly executed".

As per the announced verdict of Supreme Court of Pakistan, a three-member bench was made to supervise the commission proceedings. It consists of six members with the head being from Federal Information Authority (F.I.A).

By hook or by crook, the government fully tried to make this J.I.T controversial. Nevertheless, the J.I.T submitted 275-page reports in the apex courts noted that Nawaz Sharif, his sons, and daughter Maryam Nawaz were not able to justify their income and assets and requested National Accountability Bureau to file a reference against them.

Following the submission of the J.I.T report, the court began hearings from both the petitioners and the respondents and on 21st July, the court concluded the hearing and reserved its judgment.

The final verdict of Panama Papers.

One week later, the court announced its final decision and disqualified the Prime Minister from holding the office as he had been dishonest for not disclosing his assets and ordered N.A.B to register a reference against Sharif against corruption charges.

This is how Panama Papers have changed the fate of Pakistan!