Ḥusayn ibn ‘Alī ibn Abī Tālib (Arabic: الحسين بن علي بن أبي طالب‎‎; 10 October 625 – 10 October 680) (3Sha'aban AH 4 (in the ancient (intercalated) Arabic calendar) – 10 Muharram AH 61), also spelled as Husain, Hussain or Hussein, was the son of Ali ibn Abi Ṭalib (fourth Rashidun caliph of Sunni Islam, and first Imam of Shia Islam) and Fatimah Zahra (daughter of Muhammad) and the younger brother of Hasan ibn Ali. Husayn is an important figure in Islam, as he is a member of the Ahl al-Bayt (the household of Muhammad) and Ahl al-Kisa, as well as being the third Shia Imam.

Hussain became the head of Shia Islam and the head of Banu Hashim after the death of his older brother, Hasan ibn Ali, in 670 (AH 50). His father's supporters (Shi'a Ali) in Kufa gave their allegiance to him. However, he told them he was still bound to the peace treaty between Hasan andMuawiyah I and they should wait until Muawiyah was dead. Later, Hussain did not accept the request of Muawiyah for the succession of his son, Yazid I, and considered this action a breach of the Hasan–Muawiya treaty.[6] When Muawiyah I died in 680, Husayn refused to pledge allegiance to Yazid I, who had just been appointed as Umayyad caliph by Muawiyah, because he considered the Umayyads an oppressive and religiously misguided regime. He insisted on his legitimacy based on his own special position as a direct descendant of Muhammad and his legitimate legatees. As a consequence, he left Medina, his home town, to take refuge in Mecca in AH 60.[6][7] There, the people of Kufa sent letters to him, asking his help and pledging their allegiance to him. So he travelled towards Kufa.[6] At a place near Kufa, known as Karbala, his caravan was intercepted byYazid I's army. He was killed and beheaded in the Battle of Karbala on 10 October 680 (10Muḥarram 61) by Shimr Ibn Thil-Jawshan, along with most of his family and companions.[8]

Husayn is highly regarded by Shia Muslims because he refused to pledge allegiance to Yazid I,[11]the Umayyad caliph, because he considered the rule of the Umayyads unjust.[11] The annual memorial for him, his family, his children and his companions is called Ashura (tenth day of Muharram) and is a day of mourning for Shia Muslims. His action at Karbala fuelled the later Shia movements.[10]

A Quran written by Imam Hussain ibn Ali, from over 1300 years ago
According to most reports, Husayn was born on 10 October AD 625 (3 Sha'aban AH 4).[6] Husayn and his brother Hasan were the last descendants of Muhammad living during his lifetime and remaining after his death. There are many accounts of his love for them which refer to them together.[6]

Muhammad is reported to have said that "He who loves me and loves these two, their father and their mother, will be with me at my place on the Day of Resurrection."[12] and that "Hussain is of me and I am his. Allah loves those who love Hussain. Hussain is a grandson among grandsons."[12] A narration declares them the "Masters of the Youth of Paradise"; this has been particularly important for the Shia who have used it in support of the right of Muhammad's descendants to succeed him. The Shi'a maintain that the infallibility of the Imam is a basic rule in the Imamate. “The theologians have defined the Imamate, saying: "Surely the Imamate is a grace from Allah, Who grants it to the most perfect and best of His servants to Him”[13] Other traditions record Muhammad with his grandsons on his knees, on his shoulders, and even on his back during prayer at the moment of prostrating himself, when they were young.[14]

According to Wilferd Madelung, Muhammad loved them and declared them as his Ahl al-Bayt very frequently.[15] He has also said: "Every mother's children are associated with their father except for the children of Fatima for I am their father and lineage" Thus only the descendants of Fatima are the descendants and progeny of Muhammad and his Ahlul Bayt."[16] According to popular Sunni belief, it refers to the household of Muhammad. Shia popular view is the members of Muhammad's family that were present at the incident of Mubahala. According to Muhammad Baqir Majlisi who compiled Bihar al-Anwar, a collection of ahadith, Chapter 46 Verse 15 (Al-Ahqaf) and Chapter 89 Verses 27-30 (Al-Fajr) of the Quran are regarding Husayn ibn-Ali.

The incident of Mubahala[edit]
Main article: Event of Mubahala
In the year AH 10 (AD 631/32) a Christian envoy from Najran (now in northern Yemen) came to Muhammad to argue which of the two parties erred in its doctrine concerning Isa (Jesus). After likening Jesus' miraculous birth to Adam's (Adem) creation,[a]—who was born to neither a mother nor a father — and when the Christians did not accept the Islamic doctrine about Jesus,Muhammad was instructed to call them to Mubahala where each party should ask God to destroy the false party and their families.[17][18] If anyone dispute with you in this matter [concerning Jesus] after the knowledge which has come to you, say: Come let us call our sons and your sons, our women and your women, ourselves and yourselves, then let us swear an oath and place the curse of God on those who lie.[b][17][19] Sunni historians, except Tabari who do not name the participants, mention Muhammad, Fatimah, Hasan and Husayn, and some agree with the Shia tradition that Ali was also among the participants in this event on the side of Muhammad. Accordingly, in the verse of Mubahala the words "Our sons" is representative of Hasan and Husayn; "our women" would refer to Fatimah; and "ourselves" would be "Ali".[17][19]

Husayn and caliphate[edit]
Muawiyah, the governor of Levant, who had refused Ali's demands for allegiance, had long been in conflict with him.[20] However, when Ali was assassinated and people gave allegiance to Hasan, Muawiyah prepared to fight with him. The battle led to inconclusive skirmishes between the armies of Hasan and Muawiyah. To avoid the agonies of another civil war, Hasan signed theHasan–Muawiya treaty with Muawiyah, according to which Muawiyah wouldn't name a successor during his reign and let the Islamic world choose their successor after the latter.[21]

Muawiyah's era[edit]
See also: Muawiyah I and Umayyad
According to the Shia, Husayn was the third Imam for a period of ten years after the death of his brother Hasan in 669, all of this time but the last six months coinciding with the caliphate of Muawiyah.[22] After the peace treaty with Hasan, Muawiyah set out with his troops to Kufa, where at a public surrender ceremony Hasan rose and reminded the people that he and Husayn were the only grandsons of Muhammad, and that he had surrendered the reign to Muawiyah in the best interest of the community: "0 people, surely it was God who led you by the first of us and Who has spared you bloodshed by the last of us. I have made peace with Mu'awiyah, and I know not whether haply this be not for your trial, and that ye may enjoy yourselves for a time.[c][23] declared Hasan.[21]

In the nine-year period between Hasan's abdication in 41/660 and his death in 49/669, Hasan and Husayn retired in Medina trying to keep aloof from political involvement for or against Muawiyah.[21][24]

Shiite feelings, however, though not visible above the surface, occasionally emerged in the form of small groups, mostly from Kufa, visiting Hasan and Husayn asking them to be their leaders - a request to which they declined to respond.[17] Even ten years later, after the death of Hasan, when Iraqis turned to his younger brother, Husayn, concerning an uprising, Husayn instructed them to wait as long as Muawiyah was alive due to Hasan's peace treaty with him.[21] Later on, however, and before his death, Muawiyah named his son Yazid as his successor.[6] 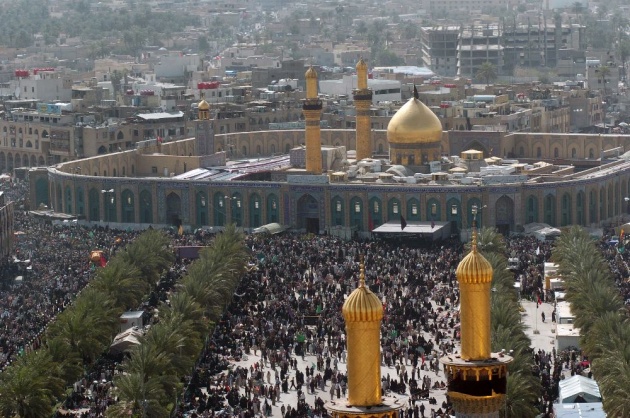