In Islamic eschatology, the Mahdi (Arabic: مهدي‎, ISO 233: mahdī "guided one") is the prophesied redeemer of Islam who will rule for seven, nine, or nineteen years (according to differing interpretations)[1] before the Day of Judgment (yawm al-qiyamah / literally, the Day of Resurrection)[2] and will rid the world of evil.[3]

There is no explicit reference to the Mahdi in the Qu'ran, but references to him are found in hadith(the reports and traditions of Muhammad's teachings collected after his death). According to Islamic tradition, the Mahdi's tenure will coincide with the Second Coming of Jesus Christ (Isa), who is to assist the Mahdi against the Masih ad-Dajjal (literally, the "false Messiah" or Antichrist).[4] Differences exist in the concept of the Mahdi between Shia Muslims and adherents of the Sunni tradition. For Sunnis, the Mahdi is Muhammad's successor who is yet to come. For most Shia Muslims, the Mahdi was born but disappeared and will remain hidden from humanity until he reappears to bring justice to the world, a doctrine known as the Occultation. For Twelver Shia, this "hidden Imam" is Muhammad al-Mahdi, the Twelfth Imam.

Throughout history, various individuals have claimed to be the Mahdi. These have includedMuhammad Jaunpuri, founder of the Mahdavia sect; the Báb (Siyyid Ali Muhammad), founder ofBábism; Muhammad Ahmad, who established the Mahdist state in Sudan in the late 19th century; and Mirza Ghulam Ahmad, founder of the Ahmadiyya sect.

Historical development[edit]
The term mahdi does not occur in the Quran, but it is derived from the Arabic root h-d-y, commonly used to mean "divine guidance". The term al-Mahdi was employed from the beginning of Islam, but only as an honorific epithet and without any messianic significance.[5] As an honorific it has been used in some instances to describe Muhammad (by Hassan ibn Thabit), as well as Abraham, al-Hussain, and various Umayyad rulers (hudāt mahdiyyūn).[5] During the second civil war (680-692), after the death of Muʾawiya, the term acquired a new meaning of a ruler who would restore Islam to its perfect form and restore justice after oppression.[5] In Kufa during the rebellion in 680s, Al-Mukhtar proclaimed Muhammad al-Hanafiyyah as the Mahdi in this heightened sense. Among the Umayyads, Sulayman encouraged the belief that he was the Mahdi, and other Umayyad rulers, like Umar II, have been addressed as such in the panegyrics of Jarir and al-Farazdaq.[5]

Early discussions about the identity of al-Mahdi by religious scholars can be traced back to the time after the Second Fitna. These discussions developed in different directions and were influenced by traditions (hadiths) attributed to Muhammad. In Umayyad times, scholars and traditionists not only differed on which caliph or rebel leader should be designated as Mahdi, but also on whether Mahdi is a messianic figure and if signs and predictions of his time have been satisfied.[5] By the time of the Abbasid Revolution in the year 750, Mahdi was already a known concept. Evidence shows that the first Abbasid caliph As-Saffah assumed the title of "the Mahdi" for himself.[5]

In Shia Islam, it seems likely that the attribution of messianic qualities to the Mahdi originated from two of the groups supporting al-Hanafiyyah: southern Arabian settlers and local recent converts in Iraq. They became known as Kaysanites, and introduced what later became two key aspects of the Shia's concept of the Mahdi. The first was the notion of return of the dead, particularly of the Imams. The second was that after al-Hanafiyyah's death they believed he was, in fact, in hiding in the Razwa mountains near Medina. This later developed into the doctrine known asthe Occultation.[6] The Mahdi appeared in early Shi’ite narratives, spread widely among Shi’ite groups and became dissociated from its historical figure, Muhammad al-Hanafiyyah. During the 10th century, based on these earlier beliefs, the doctrine of Mahdism was extensively expanded byAl-Kulayni, Ibrahim al-Qummi and Ibn Babawayh.[7] In particular, in the early 10th century, the doctrine of the Occultation, which declares that the Twelfth Imam did not die but was concealed by God from the eyes of men, was expounded. The Mahdi became synonymous with the "Hidden Imam" who was thought to be in occultation awaiting the time that God has ordered for his return. This return is envisaged as occurring shortly before the final Day of judgment.[3] In fact, the concept of the "hidden Imam" was attributed to several Imams in turn.[8]

Some historians suggest that the term itself was probably introduced into Islam by southern Arabian tribes who had settled in Syria in the mid-7th century. They believed that the Mahdi would lead them back to their homeland and reestablish the Himyarite kingdom. They also believed that he would eventually conquer Constantinople.[6] It has also been suggested that the concept of the Mahdi may have been derived from messianic Judeo-Christian beliefs.[7][9] Accordingly, traditions were introduced to support certain political interests, especially Anti-Abbassidsentiments.[9][10] These traditions about the Mahdi appeared only at later times in hadith collections such as Jami' at-Tirmidhi and Sunan Abi Dawud, but are absent from the early works of Bukhari and Muslim.[2]

Sunni Islam[edit]
The Sunnis view the Mahdi as the successor of Muhammad, but, unlike most Shia Muslims, do not believe the Mahdi has already been born.[11]The Mahdi is expected to arrive to rule the world and to reestablish righteousness 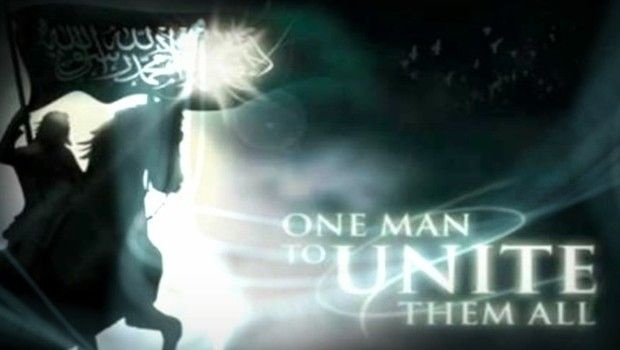