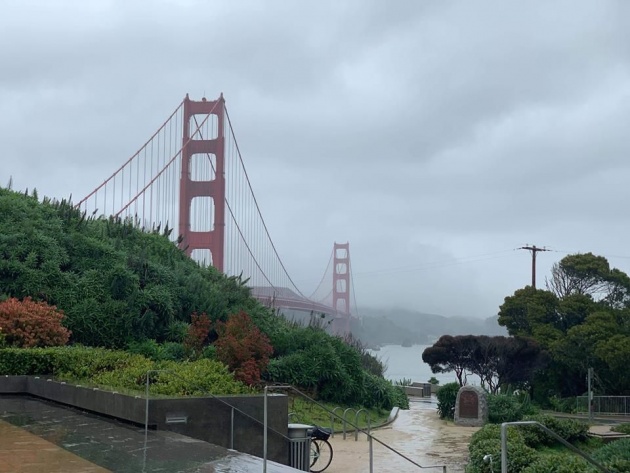 One of the most famous bridges in the world is the Golden Gate Bridge of San Francisco. For the resident of San Francisco, the bridge has the biggest roles in their lives, remembering the tough times when they rode a ferryboat to cross separate places in 1925. It took a long day trip from their place to another. Traveling through ferries was important so that they can work, can buy foods and other basic needs.

Admittedly, bridges are very important in every state where the area is isolated by the seas, rivers, and lakes. In the Philippines, the most famous bridge is the San Juanico bridge in Samar, and Leyte. With a truss design, it is the longest bridge of the Philippines that was constructed in Marcos administration.

The bridge of San Francisco began to be visible through the large lumbering tool, the fundamental material for constructing. They thought it cannot be done because of the weather, famine, poor funding, bombing, war, and mishaps. 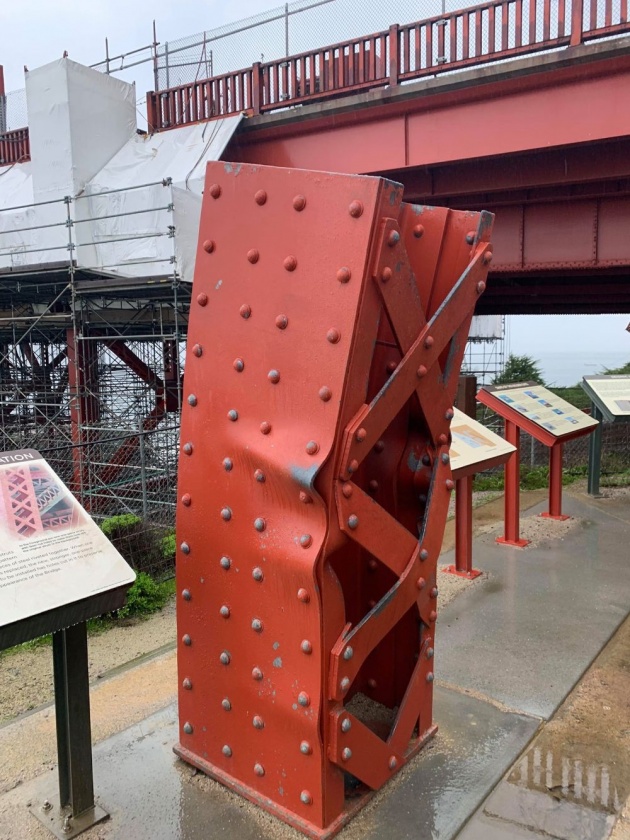 These days, red-orange color is one of the most photographed colors when visiting San Francisco the fact that it is the Golden Gate of San Francisco. It is most comfortable to maintain the offshore platform in midst of the bad weather.

Painting the Golden Gate bridge is a full-time operation. It must always be painted when the color seems to fade. Currently, they seek for new painting technologies to do the job easily.

Beautiful Places Nearby Golden Bridge we had Fun 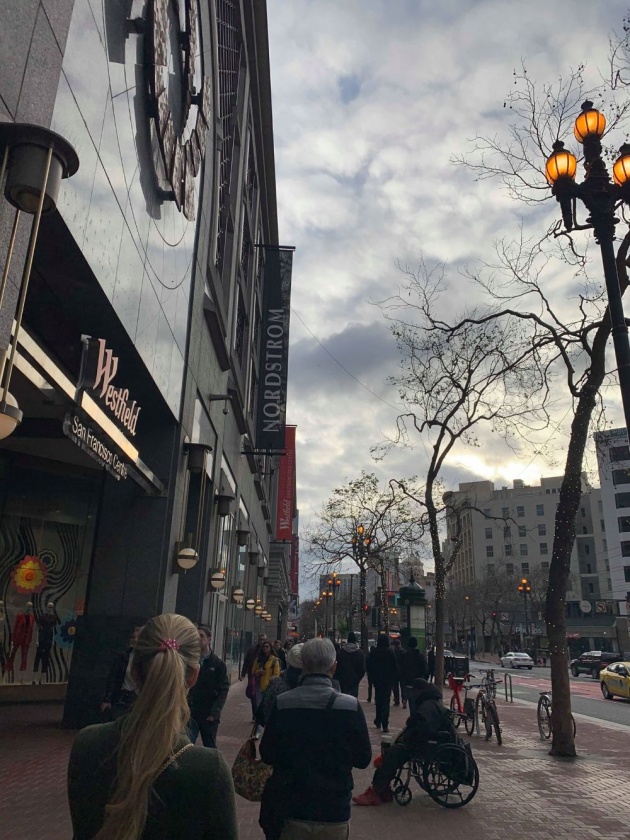 From Union Square, it is only 17 minutes ride to be at the Golden Gate Bridge. There is another way from Union Square to Russian Hill to Lombard State going to the bridge that is about 20 minutes ride. It is nearby the Nordstrom (located at the Westfield of San Francisco Centre). From the Nordstrom, we travel for 17 minutes to Union Square, going to the Golden Gate bridge. There is about 16 minutes shortcut trip from Nordstrom to San Francisco City Hall, and then to the Great American Music Hall, and continuously until the bridge. 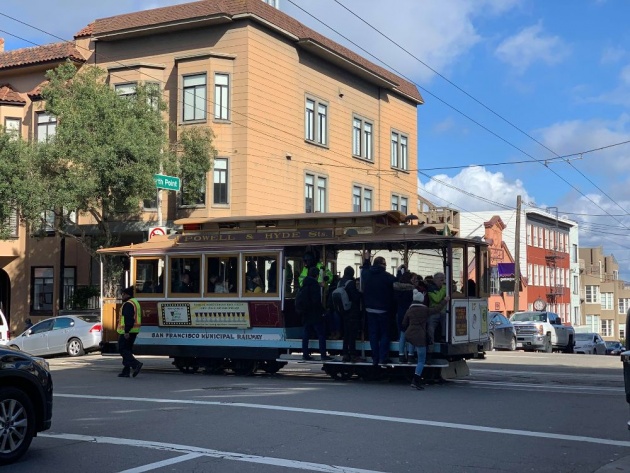 It was my sister's first time to see a cable car at Union Square. In 1973 mid-1980, there were 23 lined cable cars that loaded many passengers to distant places and it has only three remnants today with two routes that travel to the near places of the Union Square to Fisherman's Wharf. Due to the countable numbers of tourists day by day, another route was added going to the side- streets of California highways. It passes often at the Union Squares and is the most sightseeing in the place because this type of transit is rare. At first, I thought that it only operates in the wires can be seen above, but it moves at the street surfaces in the middle of the rails. 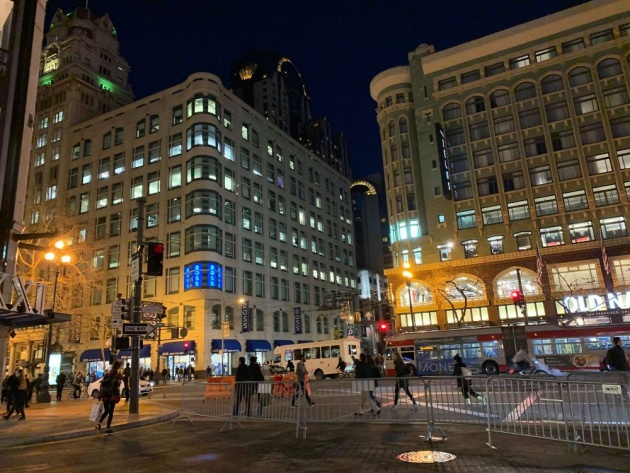 I always heard the Union Square before through TV shows, magazines, radios, movies, and newspapers. From its amazing name 'Union Square,' we can imagine luxury and entertainment. It is a place to be for relaxation and amusement. We can shop with lots of choices, go to the spa, stay in the famous hotels in the world, go to the theater, explore art galleries, peek the faraway view of Golden Gate Bridge of San Francisco, and of course experience the cable cars that travel through the rails. It is known as the plaza of San Francisco, surrounded by five-stars-towering hotels. 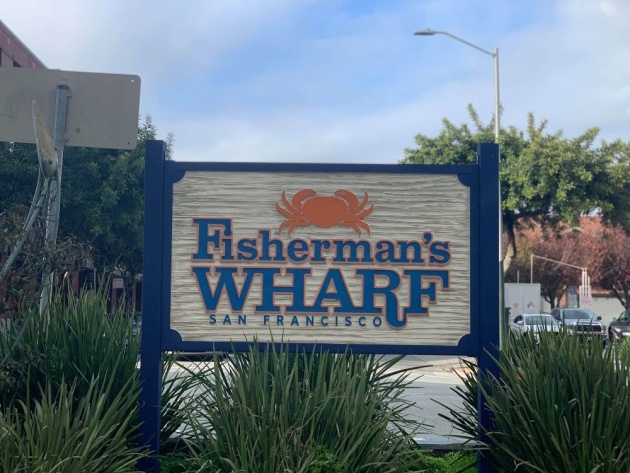 Fisherman's Wharf surrounds the Northern Waterfront of the city. Its history originated during the voyage of the Italian fisherman that discovered the place abundant with marine life. Achille Paladini, the owner of Paladini Fish Company, the plan turned out well. Mostly residents of the North Beach are Italians. Through these days, the place is the center of the market to wholesale the fish by ships. It is the busiest tourist spot with established shopping centers, museums, historical park, islands, restaurants, seeing sea lions at Pier 39.

Struggles of Building the Bridge of San Francisco 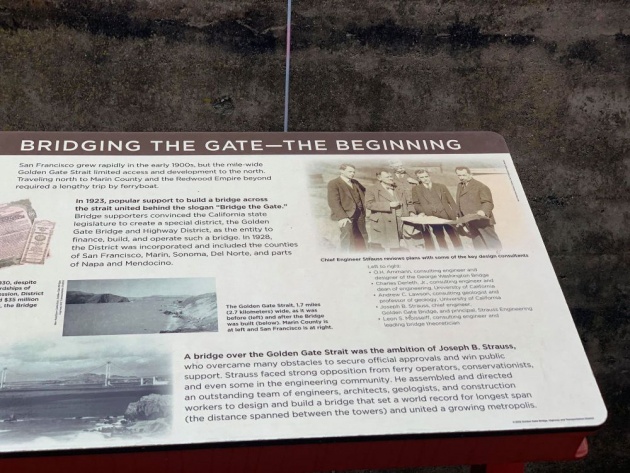 A bombing explosion occurred at the San Francisco Bay that stopped the bridge construction. The government was lacking support to fund the ongoing development knowing that the state was also struggling with an economic strike way back in 1929. America grappled famine and starvation and the government collapsed. But people who lived in San Francisco were encouraged to build the bridge in midst of the challenges, knowing that the bridge is a great help to run their life faster than the boats. The Northern Californian initiated to donate money to continue the construction. The founder of Bank of America knew the worth of the bridge, so he funded 5 billion dollars support. The bridge did not have any support from the government. The construction of the bridge stopped again because of the bad weather and deadly mishaps. After 4 years of an economic strike, the bridge received another support from William Philma and Angela Roussie in earliest January 1933. 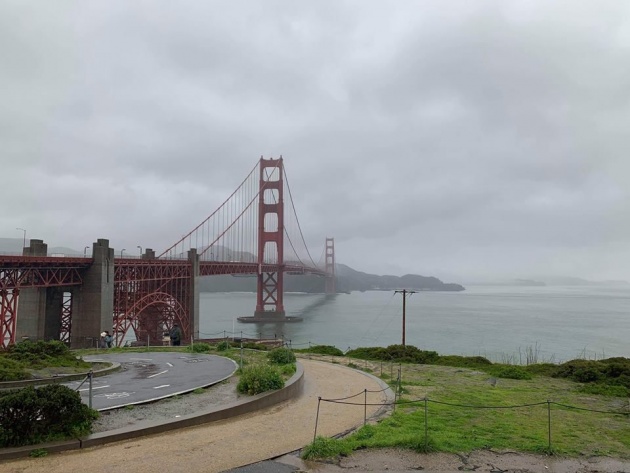 The image is owned by @jackwilliams (Bitlanders author) via bitlanders.com

The 746 feet bridge stands by the entrance of the bay tower. The architects proposed to build a unique and durable bridge with elegance and we can notice its uniqueness not only to see in pictures but to visit the Golden Gate Bridge personally. Although it was budgeted with billions of money, the workers were once again discouraged to expect success because building the South tower was never been easy. In fact, it took 10 months of halting the constructing to discover several ideas about how they can make the strongest bridge if it is hard to build the tower under the water. The workers often chose to be assigned to building the North tower located at the dry land which is an easy task. The construction of the bridge stopped again during the pilot bombing.

The residents of San Francisco suggested the colors of the ongoing construction. Many of them chose black, some said gray. The Navy suggested that maybe they can paint black or yellow to be more visible. But its founder was not convinced as she was concerned about the stronger one that will be more visible against the fogs. The navy recommended red-orange. They were positive that is visible in the middle of the fog. Through the application of the LED from Pennsylvania, the construction continued and many people agreed to paint the bridge of red-orange. It is composed of wired carbons and alloy steel to make sure it is stabilized. It is made by electrical wires to form a cable.

The Worker's Struggles and Demands 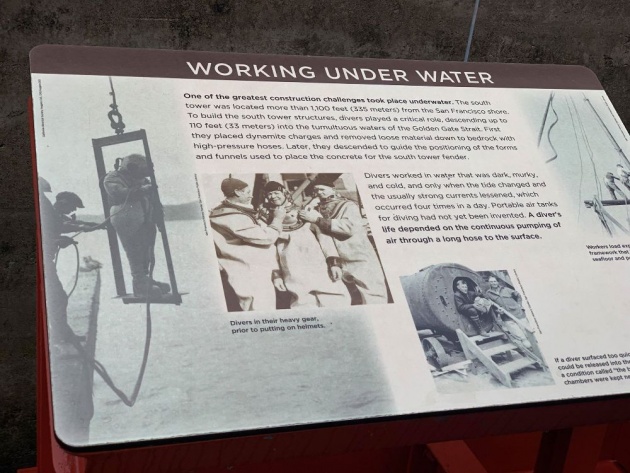 The founder faced dilemma again when they discovered the poisonous chemicals inhaled by the workers that caused them to lose their hair and toothache. But they were unstoppable to construct because of their 11$ per day salary in 1933. They were driven to build the bridge because they know it is not for their own advantage too but for the residents of San Francisco. In fact, they made their foods under the Golden Gate bridge.

In 1934, one of the workers created a violent disturbance, demanded a huge salary. There was violence erupted that alarmed the resident of the state. The worker realized that it was a dangerous job especially in protecting the elements. But some workers were patient to wait for the good salary even they know that death is the part of working in heights. A worker fell at the ocean but fortunately survived. Each worker was obliged to dive about 15 thousand pounds per square that are 18 miles an hour to build the pillar. Cable is one of the most important parts of the bridge. To have their safety often, they used eye goggles and net against the height to save their lives and psychological reassurance. The net was a great relief to catch workers who fall. The oldest worker of the Golden Gate bridge had stated that they did not have nets in their times. In fact, someone fell from the North tower in Oct.20, 1936. The workers worked as they know it was halfway hell to the club group. There was 35 million dollars budget for casualties. According to the report, there were 35 people that lost daily while building the bridge. Seems like it was a nightmare for the residents. In Feb. 17, 1937, the high tech wirings came in to avoid accidents again. There was also 7650 feet long cables to support the dam. The relationship between the bridge and the workers were like the Titanic tragedy.

Misty and the Sunset 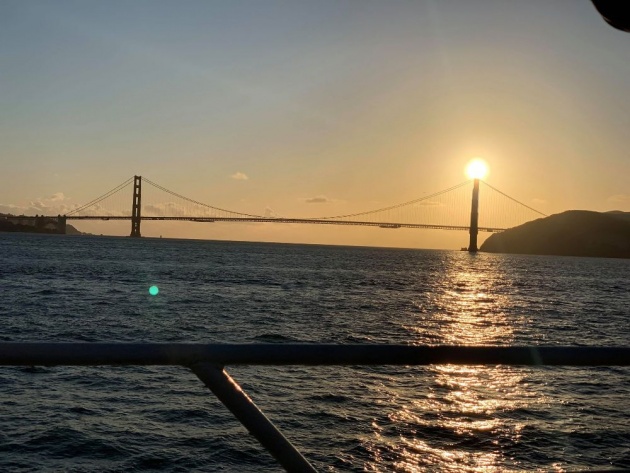 Even from a far place, the Golden Gate Bridge remains visible and dreamy. The sunset adds its breathtaking beauty that reminds me of romantic scenes. We can' never resist looking at the setting of the sun that reflects the crystal-clear and calm seawater. If Paris has an Eiffel Tower, the Golden Gate of San Francisco is a stunning trademark that is perfect to capture every memory. The distance from the Philippines to San Francisco may take 6969 miles away but it is a dream comes true to be there because being there even for once, we can become a part of the bridge's history from its earliest times until today and tomorrow. Experiencing the mist and the sunset in the middle of the cold weather in the bridge is a once in a lifetime experience I can never forget.

All rights reserved, 2019. The images above

The Start of the California Gold Rush