Mostly of people who are reading this blog don't know the meaning of word "foeticide" well in India i think every one knows it specially the women who are expecting and are sacred that what if they are carrying a baby girl. What if their doctor told them that they are blessed with the female child, if they are ....then no one can help this angel of God and they have to kill this little creature which has not open their eyes yet and have not seen the cruelty of this society ,who has not explored the world with their little feet and are not in danger of Trafficking. 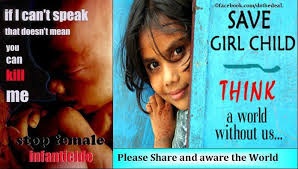 Foeticide is basically the abortion on the fetus in its early stage. Foeticide is practice widely in India and their is always a danger of abortion lurking on those women who are expecting as their family don't want a female child. In India the heinous act of sex determination is banned but in many areas it is carried illegally. According to the government Officials of India there are just 800 girls for the Thousand boys in the India that means these two hundred girls are missing, if we calculate these missing Girls in whole India then about seventy million girls are missing which are equal to the population of France. 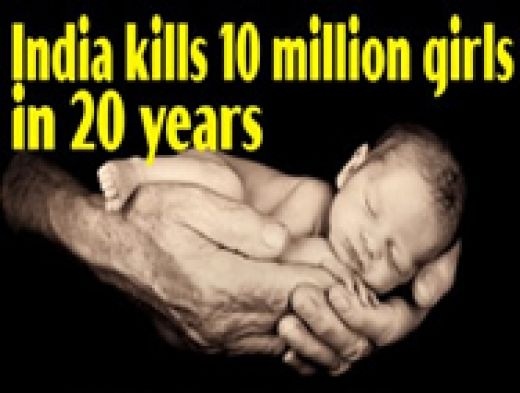 There are some states of India where their are just five girls for fifty boys so these men travel to other states and buy their women which comes in the trafficking. their are two main reasons for the female foeticide one is dowery and other is lack of education, as we know that about more then half of India's population is poor, they lack the basics of life, and for them a girl is a burden, they don't have money to pay her dowery so for them foeticide is the best way to get rid of such a tension. On the other hand mostly families think that female child does-not contribute in the family linage as family linage continues with boys so why they bring a girl in this world, spend their wealth on her and when she become a women give her to someone else with load of money?? Its really foolish , its easy to spend fifty dollar and abort her rather to bring her in this world and spend a lot of fortune. 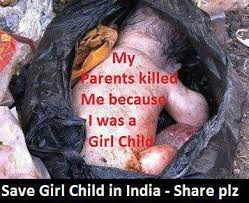 Mostly the people in India thinks the families with girls as a low status so some people says that they cant bear a shame when people look at them with pity so it is good to kill a girl rather to bring her in this world
These all condition lead to the murder of a female, which is really a heinous act. When people think about the fortune they will spend on this angel they forget to think about the pain and suffering mother will bear to abort her child. 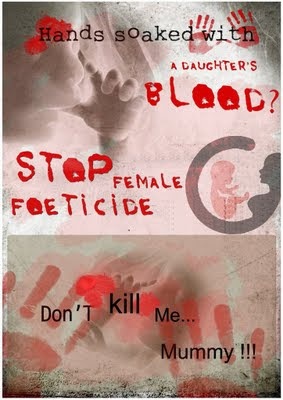 This foeticide is also practice in the well developed families of India. Mitu khurana who is a doctor as a profession and now working in the organization which work against the female feticides said in her one interview that when her in laws came to know that she will gave birth to twins baby girl they forced her to abort them when they fight back they attempt to murder her and her husband divorce her, there are many stories like her and these stories shows how females are treated in India, and how they are getting murder but there's no one who come forward to help them