India’s Vijay, Kohli grind it out in final Sydney Test 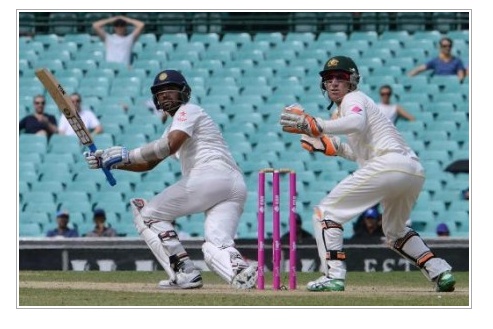 India were heading towards a draw after losing just two wickets on the final day of the fourth Sydney Test against Australia on Saturday.

The Australians declared at their overnight total of 251 for six, leaving the tourists to chase 349 runs to win off 90 overs on the fifth day.

But India were more concerned with survival on the wearing Sydney Cricket Ground pitch and tight Australian bowling to avoid a third loss in the four-match series after the third Test in Melbourne finished in a draw.

Murali Vijay was unbeaten on 71 and skipper Virat Kohli on 26.

Vijay passed fifty for the fifth time in the series in a painstaking 222 minutes off 135 balls.

The highest successful run chase in the fourth innings of a Sydney Test is Australia’s 288 for two against South Africa nine years ago.

Vijay had a few big moments during the middle session, giving a tough chance to Shaun Marsh at short cover on 42 off Ryan Harris in 37th over.

Marsh had two grabs at the ball before it went to ground.

It was Australia’s 17th missed fielding opportunity in the series.

But Rohit Sharma was out for 39 in the next over when Steve Smith took a brilliant flying right-handed catch at second slip off Shane Watson.

India had some luck when a strident leg before wicket appeal by Josh Hazlewood in the 39th over on Vijay (46) was turned down by umpire Richard Kettleborough, but was projected to hit the stumps on television replays.

First innings centurion Lokesh Rahul was the only wicket to fall in the morning session.

He advanced down the wicket only to glove Nathan Lyon to David Warner at leg-slip for 16 in the 14th over.