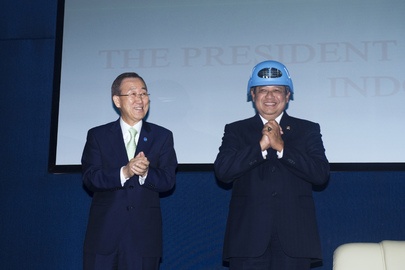 UNSG Ban Ki-moon hailed Indonesia as leader in directly providing troops and supporting peacekeeping missions around the globe. Besides, a rapid evolution away from decades of dictatorship, Indonesia is also gaining a reputation for the engagement of its citizens through social-media – one of the country’s with the highest number of its people engaged in Facebook, Twitter and other SM Indonesia President Only Head of State to Have Served as “Blue-Helmet” “Mr. President, you are the only leader of any nation in the world who has served as a UN blue helmet. You understand the challenges we face from experience. My deepest admiration and respect for your strong commitment and contribution to the peace and security of the world,” said the Secretary-General. “For decades, Indonesia has written a proud history of service,” Mr. Ban said at a joint press conference with President Susilo Bambang Yudhoyono in the city of Bogor, noting that some 2,000 Indonesian troops are currently serving in six of the most difficult UN missions – Lebanon, Haiti, Darfur (Sudan), Liberia, South Sudan and the Democratic Republic of Congo. Indonesia has also paid a high price for its commitment to the cause of global peace, Mr. Ban said, noting that 31 Indonesian soldiers had lost their lives while serving in UN missions. “I mourn with their loved ones and Indonesia. Their deaths were a loss to the world,” he said. From Training to Equipment Indonesia also contributes equipment, particularly helicopters. Critical to UN Peacekeeping efforts. Speaking at the Indonesia Peace and Security Centre in Sentul, which trains soldiers before deployment as peacekeepers, Mr. Ban described UN peacekeeping as a “symbol of hope” for communities across the world affected by conflicts. “When conflicts rage, children are out of school for years – until our peacekeepers come and make it safe to go back to class,” he said in a lecture entitled ‘UN Peacekeeping: Challenges and Opportunities for Indonesia, the Region and Beyond. They help build bridges – physical bridges to cross rivers, and bridges of trust across communities. They reclaim land poisoned with mines… peacekeepers provide free medical care to local people.” See more at our Popular Video Blogs & Current News Event Articles at www.diplomaticallyincorrect.org By Ambassador Muhamed Sacirbey – Follow @MuhamedSacirbey Facebook = Become a Fan at “Diplomatically Incorrect” Twitter – Follow us at DiplomaticallyX UN Photo - Ban Ki-moon presents Indonesian President Susilo Bambang Yudhoyono with a symbolic gift of a UN blue helmet at the Indonesia Peace and Security Centre. UN/E. Debebe