The game is played using a cue and 22 snooker balls: one white cue ball, 15 red balls worth one point each, and six balls of different colours: yellow (2 points), green (3), brown (4), blue (5), pink (6) and black (7).[3] The red balls are initially placed in a triangular formation, and the other coloured balls on marked positions on the table known as "spots". Players execute shots by striking the cue ball with the cue, causing the cue ball to hit a red or coloured ball. Points are scored by sinking the red and coloured balls (knocking them into the pockets, called "potting") in the correct sequence. A player receives additional points if the opponent commits a foul. A player (or team) wins a frame (individual game) of snooker by scoring more points than the opponent(s). A player wins a match when a predetermined number of frames have been won.

Snooker, generally regarded as having been invented in India by British Army officers, is popular in many of the English-speaking and Commonwealth countries,[4] with top professional players attaining multi-million-pound career earnings from the game.[5] The sport is now increasingly popular in China.[6] Touring professional players compete regularly around the world, the premier tournament being the World Championship, held annually in Sheffield, England 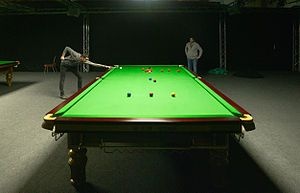