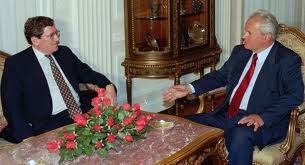 Kofi Annan's current proposal to deploy monitors to Syria may be one of few options available to squeeze peace gradually out of the current vicious cycle, but it also poses as many risks as perhaps opportunities for the citizens of that country. It not only follows the previous and now failed Arab League monitor effort but the Bosnia UN "peacekeeping" mission, while Kofi Annan was in charge. The Bosnian precedent would not be a positive one for the UN, the peacekeeping troops/states involved as well as Syria's citizens. Institutionalizing the Syria conflict may pose risk of perpetuating the status quo and indefinite conflict, even if at reduced fever level. So why would the UN Security Council move ahead on such plan: --- Allows the UN, more accurately, big powers and most critical members to claim that they are doing something even as they do not want to really involve too much beyond rhetorical. --- It allows the P5 members to resume authoritative role and project degree of unified management as situation evolves. --- UN peacekeepers may be able to reduce degree of violence even if not extinguish. This is positive although also reduces pressure for true resolution as optics of situation become more acceptable for neighbors/big powers. --- As in Bosnia, it may allow a degree of humanitarian assistance to reach citizens even as any sense of normalcy, sustained peace and freedom evades Syrians. My major concern based upon my experience and UN effort in Bosnia & Herzegovina is that peacekeeping/humanitarian mission becomes substitute for real lasting solution. In Bosnia, it became an end onto itself and became excuse for not doing more. Danger to peacekeepers as well as endangering humanitarian/observer efforts was offered as rationale not to pursue more effective/resolute efforts to bring conflict to real end. Further, such may help embed the status quo. Even if the UN's negotiating partners are responsible for "crimes against humanity" - grave violations of international humanitarian law, they become accepted as partners to UN backed mediators and thus rehabilitated. The case of Slobodan Milosevic is precedent that UN, US and Kofi Annan should recall. Milosevic was effectively re-legitimized by Dayton Accords process. He was painted as necessary pillar of stability by US (Holbrooke), Russia and European diplomats/politicians, then only to oppress Serbian citizens for several more years and initiate another war in Kosovo. Only then was he indicted and prosecuted for his Bosnia crimes as well. In the end, the UN Peacekeeping mission in Bosnia & Herzegovina effectively ended with the betrayal and mass murders (genocide) in Srebrenica (and Zepa), and NATO ultimately stepped in anyway. See more at our Popular Video Blogs & Current News Event Articles at diplomaticallyincorrect.org/c/war-crimes-justice By Ambassador Muhamed Sacirbey – Follow @MuhamedSacirbey Facebook = Become a Fan at “Diplomatically Incorrect” Twitter – Follow us at DiplomaticallyX