Interview with the main character of "Soliloquio" Felipe Poblete

A couple years ago we made the short film "Soliloquio", it´s and experimental/animation movie, and now we are going to go inside it from the main character(Felipe Poblete) point of view.

Why work in experimental short film? Does it make sense to do this kind of movies?

Actually, I have a strong friendship with the director, so, when he asked me to work as an actor, I immediately accepted, without even thinking in the kind of short-film it could be. In fact, in his later productions, I kept helping him. Regardind the second question: yes, making this kind of short-films, characterized as "experimental" on their visual and narrative aspects, makes sense to me.

It may be possible the term "experimental" is related to the fact that they are not conventional films but, considering this, wouldn't it be possible to consider any other film (like the ones we are used to watch) experimental as well?

How do you deal with an experience you do not have total clarity about the result?

With enthusiasm and good willing. I mean, is like living our daily life. No one knows exactly what is going to happen or what destiny might be preparing for anyone. We live without having complete knowledge of any future results, are we? In this sense, making a film is just like living. So, it has to be done with enthusiasm and a good disposition, learning from our mistakes, learning from the mistakes that may appear in the way during the film making. 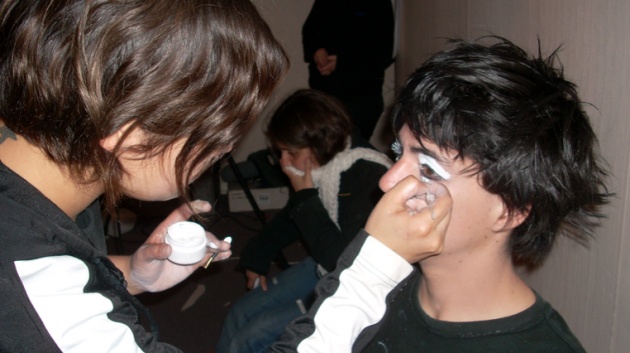 How was the experience of acting and participate in the process of the short film "Soliloquio"?

Working in team is the most valuable aspect. For me, maybe, it became really important due to the fact I was used, in those times, to paint and draw a lot; both lone-work activities. So, getting this feedback with other people… just incredible. We live in society, therefore, integration, respect and tolerance are indispensable. You learn to know yourself in the company of other people.

Somehow for me, the whole filming process was quite similar to other summer jobs. Making a picture of the situation, "Soliloquio" was filmed at the director's house, all prepared and organized by the same filming team (about 10 people as I can remember.)

Let's say I had the opportunity to prove the famous adage: "two heads work better than one". Therefore, three, four, six or ten work even better than two.

On social networks and online distribution. Experimental work, whether visual, photographic, literary, etc. Do they make some kind of contribution?

Absolutely yes. In my case I would say I'm not the kind of conventional social network user. I only make use of an email account and, from time to time, I share some Chilean poetry critics I work on. I'm not an internet hard user, nevertheless, lots of people are strong users and, for this, inception of this kind of material has become quite relevant.  I think it may be an aesthetically attractive way for opening people's minds and their perceptive canon. Who hasn't been touched by a film, poem or song anyway?

What is the limit to make an artistic work?

Good question, maybe a hard one. One could even think of art history as an effort to situate those limits though they may not necessarily exist. They are just "historical" tools.