John Wick is a 2014 action thriller film that surprised a lot of movie goers. This is because (frankly) the name does not sound that impressive – in fact, unless one saw the poster of Keanu holding and pointing a gun, one may not discern that the film is of the action genre (otherwise, a person may think that it is a horror movie about a man that has something to do with a wick).

Anyway, as mentioned, the film is one of those surprising unknown movies that captivated the audience (one similar movie that comes to mind is Taken). John Wick has all the elements that an action movie should have – and this is quite a given if one is to look at how the movie did in the box office and how it was received by both critics and fans.

Before going any further, let it be known that this blog is not a review of the film John Wick (there’s a lot of those already floating in cyberspace – and some are actually bad as instead of a review, it came out more like a book report of summarizing and highlighting characters, plot points, etc...)

Instead, this blog will provide a background of John Wick in its entirety and as well as focus on its upcoming sequel – John Wick 2. This post will give out backgrounds on different aspects of John Wick and basically, fan or not, the reader will most definitely find this blog interesting.

John Wick – the Legend and the Myth

Let us start with the question who is John Wick. John Wick is a retired hitman who is better known to the underworld as the person you send to kill the boogeyman. This statement alone should send chills to the spines of even the bravest men as the boogeyman is known in popular culture as a non-embodiment of terror (this is why it is used as a form of scare tactic for misbehaving children)

John Wick left his profession since he found love (yup, a woman’s love has a tendency to do that). Unfortunately, his wife died to a disease not disclosed in the film. His wife did left him something behind to keep him company – a cute little dog. Sadly, that too was taken away from him, but NOT from natural means, but from a more violent way!!! (Yikes)

The grief from the lost of his wife and the unnecessary killing of his dog (plus his car was stolen away from him) forced John out of retirement to pursue vengeance against his evildoers. It is safe to assume that Wick’s goal of retribution wouldn’t end well for those poorly mannered thugs that attacked him, violated his home, and killed his dog (yes folks, in other culture, taking away the life of a pet is enough to get that person killed). But why would people fear John Wick? What’s up with this Boogeyman-killer? Well, let’s just say that the syndicate to which John belonged was able to secure the upper echelons of the criminal underworld thanks to the last mission assigned to John (more on this on the next sections). 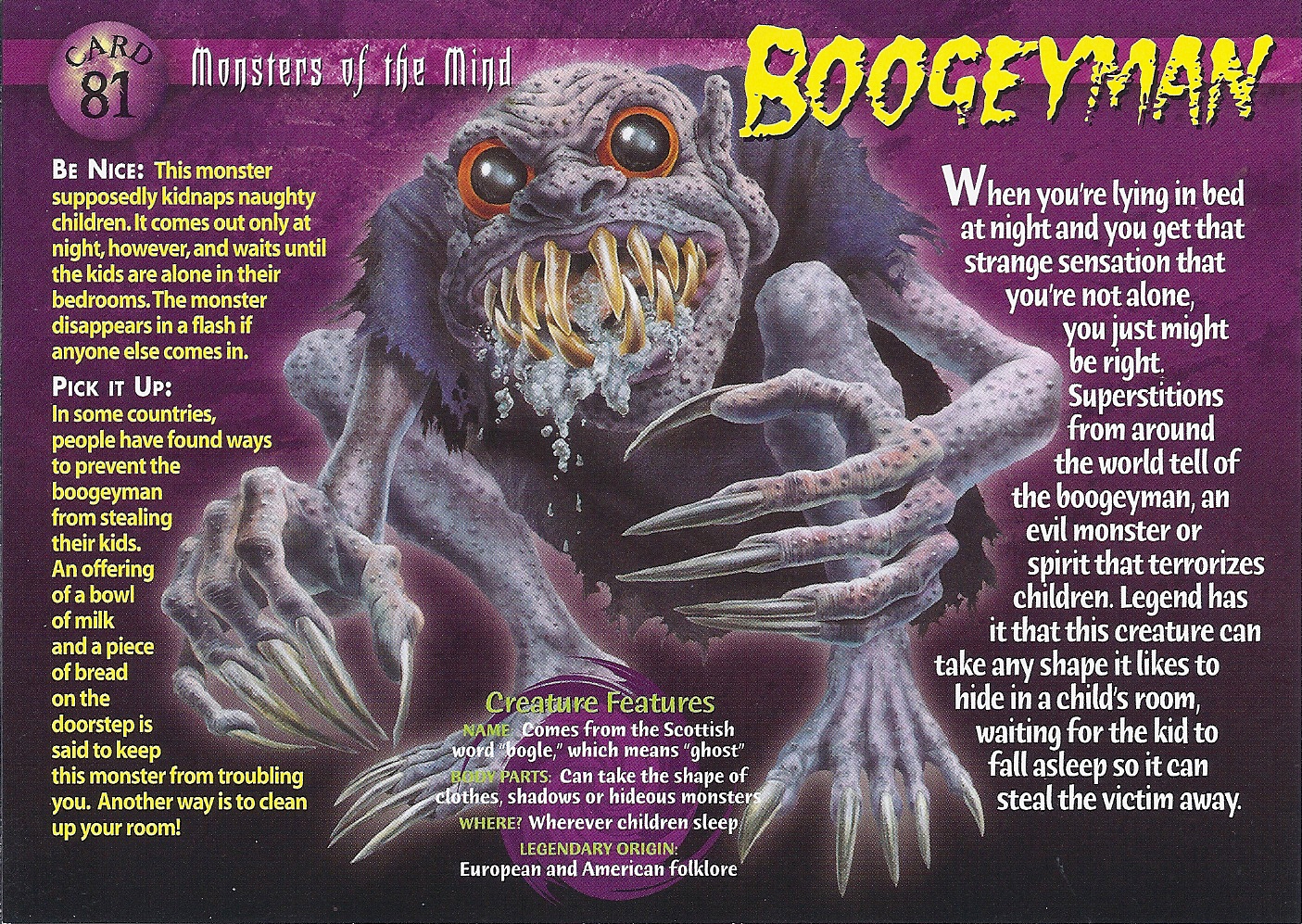 The above photo is how a Boogeyman is perceived. So basically, any gangster who received that particular title must be terrifying and menacing. However, John Wick is so bad, that he is the one sent by his bosses to eliminate the Boogeyman of the enemy. Although, John Wick is the so-called Boogeyman-killer, in a nutshell, John Wick is a hitman with a heart.

His unwavering retribution only includes killing people that he is supposed to and leaving innocent bystanders alone. He has the respect of the criminal underground – from the lowly henchman up all the way to the head of the underground empire. He has a tatoo at his back indicating he has military background and nowadays formally dressed to kill.

John Wick is polite and corteous but shows little emotions. He shows no remorse when killing and also does not show any pleasure in doing so. For him, it is just a mission that should be accomplished.

At this point, let us talk about the film. After seeing the trailer above, it is obvious that the movie was named after the main character. Keanu Reeves plays the role of John Wick. The way Keanu portrayed the character tandemed with an awesome original story and great supporting casts was enough for the film to earn more than twice of its production budget  –  on top of this, the movie received universal acclaim from critics (some say that there is even a cult following has formed after the film) and audience.

Although, the film did not pass the $1-billion earnings mark, its $80++ million production run was more than double of its modest $20 million budget. Considering the fact that it is not a recognizable name, the movie’s ticket sales is actually impressive.

Besides, aside from critics, audiences have nothing but praises for the film. The plot has a good foundation to start an awesome franchise (this kinda explains why a sequel is already scheduled to be shown on February next year).

The movie is one hour and forty one minutes long. It was directed by Chad Stahelski and David Leitch. The film is Stahelski and Leitch’s directorial debut but the two are already industry tenured as stuntmen. Together with Reeves, the film has a great supporting cast – Michael Nyqvist, Alfie Allen, Dean Winters, Ian McShane, and many more. The cast is not that ensemble but everyone brought out the best of their character and acted brilliantly making the film as the widely accepted one of the best action movies of that year (2014).

(Photo Source: Google Images - some of the amazing people of the movie)

Now that we have a better view of John’s past and the film’s accomplishments, it is now time to look at the premise of the story. Before moving on, please be advised that the following content may contain some spoilers. However, yours truly will try to narrow it down as to avoid exposing much goodies as possible. The beginning portions of the film shows John Wick, his wife Helen, their good times, and how he lost her due to an unspecified illness. Helen did left him with a dog as his companion to which he may find some form of console.

John continued living and eventually bonded with the dog and grew fond of it. He brought Daisy (the dog) with him on different places and drove around his equally impressive car – a vintage classic 1969 Mustang (the modely type of Eleanor from the hit movie Gone in 60 Seconds).

One fateful day, while filling up the car in a local gas station, Wick and Daisy encountered Iosef and his goons. They are members of a Russian syndicate with Iosef being the ony son of the head of that particular criminal empire. The thugs wanted to buy Wick's wicked ride but he refused.

That the Russian gansters attacked John's abode, hit him unconscious, killed his dog, and stole his car. This particular violation triggered a chain of events that forced John to go back to his former lifestyle and seek vengeance to those who wronged him. These includes killing Iosef which interestingly belongs to his former criminal affiliation and son of his former boss.

(Photo Source: Google Images - the head of the Russian syndicate [Vigo] upset at his son [Iosef] for pissing-off John Wick)

In fact, when news arrived to Vigo (John's former employer), he berated his son and informed him that he will die. Vigo told Iosef that Wick was his best assassin and was only able to get out of the organization by accomplishing an impossible task – and that is to eliminate all their enemies on a single night. The bodies piled by Wick that night cemented John's reputation as a focused ruthless killer never to be messed with.

Anyway, as expected, the film ends with John killing everyone that got on his way to accomplish his goal. I will not give much detail about how John finished his objective. Interested readers would have just to see this movie masterpiece to find out. Let us now go to the upcoming sequel. The next movie is entitled "John Wick – Chapter Two" The sequel's official movie trailer is already out in YouTube and will be provided below at the bottom part of this post for the reader's convenience.

Much of the details for John Wick 2 remains unknown. However, from the trailer, one can deduce that the John Wick sequel would be somewhat more action packed compared to its predecessor. This is because, instead of facing off with a single criminal organization, John has to deal with some of the best assassins around the globe. As mentioned, the reasons why is not yet known, but for sure, it would be as exhilarating as its the fist movie.

John Wick – Chapter Two is scheduled to be released on February 2017. Be sure to include it on your films to watch for next year. It is certainly worth looking forward to together with other scheduled sequels of famous films.

That's just about it. Be sure to watch the trailer up to the last part. There's a teaser there – let's just say that Neo has been reunited with Morpheus (Matrix fans will get what this means)