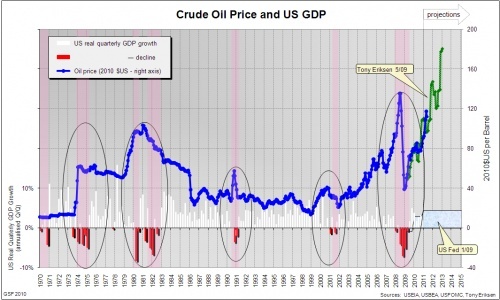 Highest ever at this time of year even as demand is down to decade old levels. The US Federal Reserve under Ben Bernanke and Obama Administration is taking notice of the dramatic spike in gasoline prices, but will Federal regulators and Prosecutors take closer look if the real culprit is more about speculation rather than supply/demand fundamentals or even war fears? We have already written much about this danger to economic health and effective tax surcharge upon a wounded American consumer. Please see our Blog for Video “Petroleum Prices Spike, But Why?” - diplomaticallyincorrect.org/films/blog_post/petroleum-prices-spike-but-why/45705. The fundamentals and even presumably special factors for rising prices are inconsistent and speculation/manipulation is not a mere conspiracy theory but something that appears to be a major driver taking into consideration all reasonable causes. Bottom line: the two rational offered for spiking oil prices are inconsistent with each other. The US and global economies cannot continue to grow and fuel petroleum demand if an Iran conflict breaks out and supplies are at risk from the Persian/Arab Gulf. Further, the US economy, jobs and consumer health cannot continue to expand with gasoline prices at these levels. See our Popular Blog -"Oil Prices Beyond the Pump"- diplomaticallyincorrect.org/films/blog_post/oil-prices-beyond-the-pump/46835 In short, the US and global economy are at risk from petroleum prices that have spiked by more than 25% since end of 2011, and Obama’s election is more endangered than by any Republican opponent, that is unless we are staring into $5 Gasoline and that Republican is yelling, “drill, drill, drill”! For current news event articles related to Oil/Gasoline & Economy, see our popular video blogs at “International Financial Crisis” Channel - diplomaticallyincorrect.org/c/international-financial-crisis By Ambassador Muhamed Sacirbey – Follow @MuhamedSacirbey Facebook = Become a Fan at “Diplomatically Incorrect” Twitter – Follow us at DiplomaticallyX Graph Courtesy of “The Oil Drum” - www.theoildrum.com/

How to Start a Gasoline Station Business?

Video Credits: Spill Prevention via YouTube Image Credits: Sharon Lopez via Bitlanders One of the i…