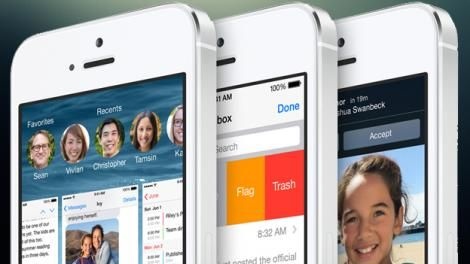 Apple has only just taken the wrapper off iOS 8, yet as good as it is there are definitely some things which could be improved or added and so we can’t help but dream of iOS 9.

Nothing’s yet known about it at all, but we’re sure Apple is already beavering away on the next iteration and we’re pretty confident that it will arrive sometime in September 2015.

Why are we so confident of that? Simply because the last few versions of iOS arrived in September and even if it doesn’t it will almost certainly be towards the end of the year since Apple’s unlikely to leave much less than a year between releases. We can’t even guess at anything else yet, but we’ve got a wish list, so here’s what we want to see:

Apple is regularly improving its once-disastrous mapping effort and with each update it becomes ever more useful, but it’s still not quite a match for Google Maps.

One major improvement which was actually rumoured for iOS 8 but didn’t arrive was public transport directions, which would add bus, train and subway routes, making it easier to get around.

Why it was a no show isn’t clear but we’re hoping it’s a feature that will be picked up for iOS 9 if not before.

More ambitiously, we’ve also heard rumours that Apple is working on an augmented reality view that uses your camera to highlight points of interest on your screen. We never expected that to make it into iOS 8, but fingers crossed for iOS 9.

Siri is tremendously popular and with good reason. Apple’s virtual assistant makes it quicker and easier than ever to find out information and does a solid job of making iOS devices hands free.

It’s getting even better with iOS 8, thanks to a handful of new features, such as Shazam integration and the ability to activate it simply by saying ‘Hey Siri’.

But there’s still room for improvement and Apple could do worse than taking a page out of Microsoft’s book. Cortana, Microsoft’s Siri rival, has an impressive amount of inflection in its voice making it sound less like a dastardly robot and more, well, human.

It’s not a feature which makes it any more useful as such, but it certainly makes it more pleasant and natural to talk to and we’d love to see Apple take a similar approach with Siri.

We’ve been crying out for widgets for years and with iOS 8 Apple is sort of giving us them… sort of.

They live in the Notification Centre and include basic functionality or give users at-a-glance information. For example one of the widgets shown by Apple displayed live scores from sports events.

But what we’d still love to see is home screen widgets. It’s understandable that Apple wants to keep its interface looking clean and neat and that’s presumably one of the reasons why widgets have taken so long to arrive in any form and why even now they’re tucked away in the Notifications Centre.

But empowering users to customise their home screens can only be a good thing and if Apple doesn’t want to go as all out with it as Android has it could always look to Windows Phone for inspiration and simply make its icons ‘live’.

This doesn’t have to be completely different to what’s there now, but folders that tell you more information about changes to the apps held within would be amazing.

Although Apple still arguably has the largest and most diverse selection of apps of any mobile OS it largely keeps them at arms-length and keeps the core smartphone operations fairly locked down.

There aren’t any third party SMS apps for example and while there are alternatives to the ‘Mail’ app there’s nothing built into iOS to let you make one of them the default email app.

So we’d love it if iOS 9 let us switch to third party default apps and we’d love it even more if Apple opened up more APIs to developers, enabling them to make alternatives for other Apple apps.

Not that Apple doesn’t do a great job for the most part, but choice is rarely a bad thing and as it’s now allowing keyboard extensions this might not be the pipe dream that it once seemed.

The ability to hide apps that can’t be uninstalled

Apple clearly doesn’t want people deleting the stock apps that come with iOS, but we’d wager we’re not alone in saying that we don’t use all of them and having them clogging up home screens.

Even tucked away in a folder that will never be opened isn’t ideal, so having a way to hide them would be great.

Android has its app drawer and we don’t expect as major an addition as that, but maybe just a ‘hide’ option against them in the settings screen. Then you can always go back in and unhide them if and when you decide that you do want to use them.

This is a feature that would become even more important if Apple let us change the default apps as suggested above.

Liking iOS doesn’t necessarily mean liking iTunes and it definitely doesn’t mean liking being forced to use it whenever you connect your iDevice to a computer.

It’s a rather divisive piece of software and there are times when simply being able to mount your iDevice as a drive, wade through its folders and cut and paste things would seem an easier way to go about managing it, so it would be great if Apple let us do just that with iOS 9.

It doesn’t have to ditch iTunes, just give us the option to use something else.

Embrace jailbreaking rather than trying to prevent it

Apple has always done its best to prevent jailbreaking but determined users always find a way. There are numerous advantages to having a jailbroken device and we’re not talking about the illicit ones.

It’s a way to get new apps and features that Apple won’t allow because they don’t fit into its walled garden.

Often these are things that other operating systems already provide or which Apple will later add. For example folders were possible on jailbroken devices long before they were added to iOS.

Of course when Apple does add these features they’re normally a lot more polished and stable, but adventurous users should have the option to get new functionality early.

We’re not saying Apple should build in the ability to access these things, just that it shouldn’t block it, much like Google makes no attempt to stop users from rooting their devices.

We don’t see Apple ever doing a 180 on this but we’d love it if the Cupertino company did make things more lax in iOS 9.

Streaming music is really taking off and we’d love it if Apple offered its own streaming service, much like Google did with Play Music All Access.

Not that the existing services aren’t great, but one which can easily be tied into your iTunes account and include access to your existing iTunes library would certainly be welcome. Plus if Apple did make a streaming music service you know it would be slick and attractive.

It already has iTunes and now it’s purchased Beats and has access to Beats Music, so it’s not unrealistic to think that Apple might build the service into iOS 9, either as Beats Music or under new Apple branding.

TextEdit and Preview are two apps which were rumoured for inclusion in iOS 8 but never appeared. If you recognise those names that’s probably because they’re both Mac applications and it looked like we were going to get iOS versions of them.

These wouldn’t have been hugely exciting inclusions, as according to the rumours doing the rounds at the time they would simply let you view TextEdit and Preview files stored in iCloud, rather than actually letting you manipulate them in any way, but it would still have been a useful feature to have so we’re hoping they’ll make their way to iOS 9.