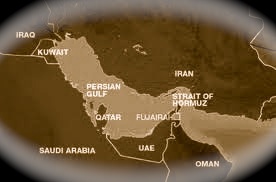 None of the major players want military conflict at Strait of Hormuz , not Washington, Beijing, EU, GCC or Tehran. That explains why the IAEA (International Atomic Energy Agency) has been successful in today (January 30, 2012) initiating a small investigative mission, but that includes two nuclear weapons experts to Iran. However, do not expect any rapid resolution. Rather, all or at least most recognize that slow diplomacy preferable over rapid slide to war. From US to EU and even Israel there is recognition that military strikes can ignite broader conflict but do little to stop Iran’s nuclear program. Covert action may also substitute for open conflict. Iran’s major Arab rival in the region, Saudi Arabia has as much to lose from closure of the Strait of Hormuz and potential unrest among the Gulf’s Shia minority. Iran cannot win a war with US and NATO allies just like its adversaries cannot win the war against it. However, Iran would be the biggest loser, and not just its population but perhaps the theocracy’s grip on power. China, India, Japan and most of Asia though hold the balance of economic/diplomatic weight here. A blockade of Hormuz and/or conflict would impact these countries greatest as they are the most dependent on the Gulf, Iran and neighbors, for their oil imports. China and most of Asia will continue to buy Iranian oil. They may even negotiate it at discounted rates, although discount may be fleeting if overall petroleum prices rise globally. And, that is what Iran seeks to impress on rising prices, along with speculation in western commodity markets, to with its combative talk. Iran may also look to shut-off oil exports to Europe before the EU has scheduled to impose its oil embargo in July 2012. It is a kind of who breaks-up with the other first psychology, but also has practical implications. EU may have to scramble to make up the deficit (and probably before Libya is fully back online). On the other hand, Iran is already securing new agreements with China, India etc and even Russia which could benefit from reselling Iran petroleum at premium over what it may pay for it. (Read: "EU Ups Sanctions on Iran-Will it Work? diplomaticallyincorrect.org/films/blog_post/eu-ups-sanctions-on-iran-will-it-work-by-ambassador-mo/43988 ). Nonetheless, the sanctions on Iran will hurt global economy and Iran. Someone will yell “uncle” (give up) before the other; however, the current IAEA inspections and soon to follow negotiations will provide an outlet instead of full-blown military conflict. There is still risk of war, and manufactured incidents by the multiple players should be expected but more as an extension of what is likely to be drawn out diplomatic talks/maneuvering. By Ambassador Muhamed Sacirbey - FOLLOW mo @MuhamedSacirbey Facebook Become a Fan at “Diplomatically Incorrect” Twitter – Follow at DiplomaticallyX