Is Kolkata witnessing erosion of the great adda culture? 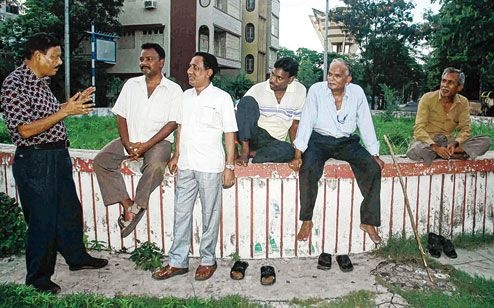 Bengalis are known world over for their great culture of adda. Just like their passion for food,movies,music,books,sports etc, Kolkata takes pride in its addas too, which is rooted in the cultural ethos of the city. In fact, the word adda has been incorporated in the Oxford English Dictionary too! However, addas - informal chit-chats with friends and like-minded people in a hangout or even at a corner of a street – is gradually eroding from the landscape of this cultural city.

Adda had been seeped inside the ‘paras’ (localities with big old houses) of the city and its suburbs, where every evening people could be seen discussing topics ranging from local politics, breaking news, books to common daily rigmalore over a cup of tea at the small tea-stalls. However, with most of these localities being replaced with multi-storied housing complexes, the ‘adda’ culture is on the wane. Further, technological advancement has made people more inclined towards devoting their time on the internet, rather than indulging in an adda with their friends.

Coffee House at College Street, that stood testimony to the long addas of intellectuals as well as common people from diverse creative fields at one point of time, is now a witness to the slump of the adda culture in Kolkata. People have moved to the various swanky malls of the city, the din of the crowd rarely offering the ambiance for an adda. The mushrooming coffee shops have the facilities, but lack the personal warmth that adda-goers felt in their corner tea stall. The missing of the human touch to a more mechanical way of life is another big reason for the change in the trend of ‘hanging out’ with friends.

In order to understand the importance of adda, it is essential to learn about its origin and deep-roots in Bengali culture. Adda is said to have originated during the erstwhile zamindari system prevalent in Bengal when the zamindar or the landlords were surrounded by his moshahebs or sycophants who often used to indulge in addas with wine and music.The famous Bengali adda also had its roots in the villages, where elders used to assemble together and discuss local politics. Over a period of time, things changed and the literary sessions came into being, which were made fashionable by the illustrious Tagore family of Jorasanko.

In later years, the ‘Monday Club’came into existence which included luminaries like Sukumar Roy, Dr BC Roy and PC Mahalanobis.Even the birth of the Bengal Renaissance is said to have originated from the adda which was held in the house of the famous teacher and poet Henry Louise Vivian Derozio in the early 19th century.Moreover,the addas held in the office premises of the reputed periodicals like Probashi,Porichay,Shanibarer Chithi,Kallol and Desh were known for their contribution in the evolution of the Bengali culture and tradition.

But the place which stands out where adda is said to have reached its zenith is in the early 50’s when notable men from different walks of life such as Satyajit Ray,Subhash Ghoshal,Paritosh Sen,Kamal Kumar Majumder and others would meet everyday at lunchtime at the Coffee House in College Street, immersed in adda of the highest order for endless periods which eventually resulted in masterpieces such as the Bengali film ‘Pather Panchali’.Consequently,these addas had an enormous impact on the matchless creativity of these renowned personalities of the times.

Now, that very adda is losing its sheen and with time is fading away with its glorious past.Moreover,the addas where one used to share his/her creative ideas and thoughts is losing its way. People are getting busy in their daily lives, leading a hectic lifestyle, getting online more being off-line, and in all these, the adda culture is gradually losing its way into a nostaligic past.