Is Russia Free for Artistic Expression? 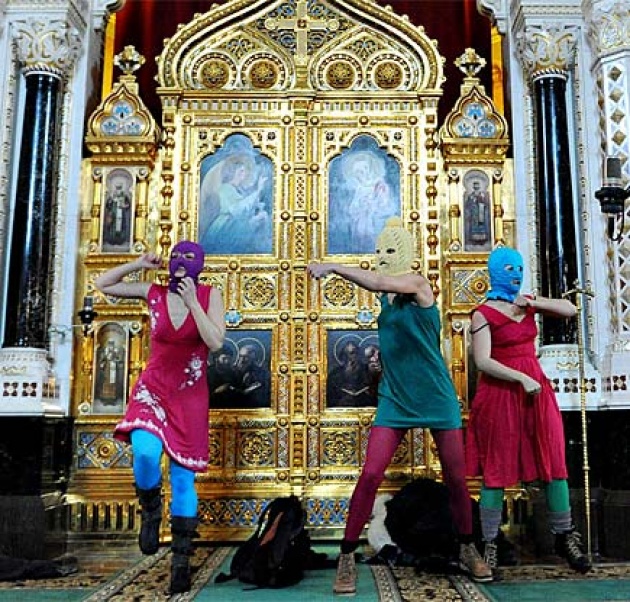 “Fulfilling the right to participate in cultural life,requires respecting the right to discuss and challenge religious symbols and dominant values including through the medium of artistic expression. There is an urgent need to respond to the desire of all persons to access, participate in and contribute to cultural life without discrimination and to promote everyone’s right to access and enjoy cultural heritage,” according to the UN Special Rapporteur in the field of cultural rights, Farida Shaheed.The current situation of Russian all female punk band "Pussy Riot" which burst inro an Orthodox Church (Photo Above) may be a particularly tough consideration where the right to expression and religious rights/respect come into apparent conflict. To be clear, the punk band nor incident was specifically mentioned in the Statement below.

Upon completing a two week mission to the Russian Federation, Ms. Shaheed noted that artistic life is vibrant in Russian society. However, she said she was “disturbed” by reports of social art activists being harassed by the police, and being prosecuted and convicted for provocative artistic expressions. The Special Rapporteur evaluated areas where ethnic minorities are living as Tatarstan  (See our Blog for Film – “Alsou Abramova –Ruusia’s New Diplomat Artist”).  as well as the status of disadvantaged groups, as the disabled. Summary of her Report and access to the full Report is available below. See our Blog for Film “Occupy Vladimir Putin”

MOSCOW (26 April 2012) – The United Nations Special Rapporteur in the field of cultural rights, Farida Shaheed, called* on the Russian Federation to respond to the desire of all persons to participate in cultural life and access cultural heritage, while noting a number of “excellent initiatives” to promote cultural rights.

“Artistic life is vibrant in Russian society”, Ms. Shaheed said at the end of her first mission to the Russian Federation from 15 to 26 April. “I am disturbed, however, by reports I have received of social art activists being harassed by the police, and being prosecuted and convicted for provocative artistic expressions”.

“Fulfilling the right to participate in cultural life,” the independent expert stressed, “requires respecting the right to discuss and challenge religious symbols and dominant values including through the medium of artistic expression.”

Ms. Shaheed was interested to hear about initiatives encouraging people to research and document their own histories. “I hope, however, that more can be done to ensure that history is interpreted in a multifaceted way, allowing for the expression of different perspectives, including from various communities.”

“There is a need to establish proper channels to enable local communities to voice their concerns on matters relating to their cultural heritage, including the urban landscapes in cities such as Moscow and St Petersburg. In addition, the rights expert recommended that consultations be conducted urgently regarding the planned building of a gas pipeline over the Ukok Plateau in the Altai Republic, which is part of a UNESCO World Heritage Site.

The Special Rapporteur welcomed the participation of the private sector in cultural life. “However”, she said, “it is important to avoid an over-commercialization and to achieve a good balance between the public and the private sectors in this area.”

Ms. Shaheed also applauded the official decision to ratify the UN Convention on the Rights of Persons with Disabilities. “I look forward to more focused efforts to ensure the full and equal enjoyment of cultural rights of persons with disabilities, including children,” she said. “In particular, efforts should be made to establish specialized pedagogical institutes, increase support for cultural activities for concerned children, and eliminate the stigmatization of persons with disabilities.”

During her 12-day mission, the independent expert visited Moscow, St. Petersburg, Altai Krai and Tatarstan, where she met with Government officials at the federal and regional level, as well as representatives of public institutions and academic and research institutes in the field of cultural policies, cultural heritage and cultural rights. She also held talks with representatives of minorities and indigenous peoples, and civil society organizations.

Ms. Farida Shaheed took up her functions as Independent Expert and then Special Rapporteur in the field of cultural rights in August 2009. She has worked for more than 25 years promoting and protecting cultural rights by fostering policies and projects designed in culturally sensitive ways to support the rights of marginalized sectors, including women, peasants, and religious and ethnic minorities. Ms. Shaheed has been the recipient of several national and international human rights awards, and is an experienced participant in negotiations at international, regional and national levels.

Learn more about the mandate and work of the Special Rapporteur: http://www.ohchr.org/EN/Issues/CulturalRights/Pages/IECulturalRightsIndex.aspx