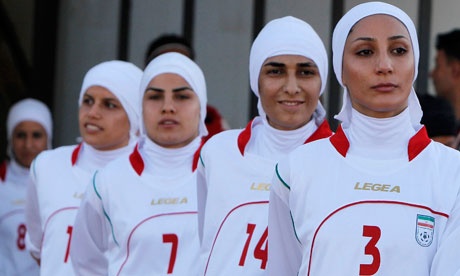 Hijab or Islamic female head scarves according to top UN official should be endorsed for international competition by the International Football Association Board (IFAB) (set to review the laws of the game regarding the use of headscarves by female players during its annual meeting, which will be held in the United Kingdom this March 3, 2012).The initiative was initially driven by the International Federation of Association Football (FIFA) Vice-President Prince Ali Bin Al Hussein on behalf of the Asian Football Confederation (AFC). “FIFA has the responsibility to ensure that everyone has an equal chance to participate in football, without any barriers and regardless of gender, race, ability, age, culture or religious beliefs,” said the Secretary-General’s Special Adviser on Sport for Development and Peace, Wilfried Lemke, stressing there are other sports that already allow the use of headscarves. In a letter to FIFA President Joseph Blatter, Mr. Lemke voiced his support for the use of a Velcro-opening headscarf in FIFA-regulated matches and competitions. Mr. Lemke also emphasized the relevance of keeping soccer an inclusive sport which can contribute to the promotion of gender equality and women empowerment. Ultimately a Matter of Personal Choice: On personal level, whether we see the hijab (headscarves) as mandatory under Islam or matter of religious expression, we prefer that all have option to interpret and define manner of their observance. The proposed valcro hijab does not appear to hold any danger and is compatible with head-guards worn now by a few male soccer players in competition. Opportunity For All: Mr. Lemke expressed his “wish that the issue can be resolved in a way that respects both the laws of the game as well as cultural considerations, while promoting football for all women without discrimination. “Such a harmonization would remove a barrier that can deter women and girls from participating in football. It would send the message that each female player, from the top elite level down to the grassroots, has the freedom to decide whether or not to wear this particular piece of attire while on the field. It would give the opportunity for remarkable female athletes to demonstrate that wearing the headscarf is not an obstacle to excelling in life and sports, and would hence contribute to challenging gender stereotypes and bringing about a change in mentalities.” Involving girls/women in sports under any uniform standard is preferable as a means of inclusion, empowerment and pushing back barriers. More at our video blogs website & video for blogs on sport, art & diplomacy at “Diplomat Artist” Channel - diplomaticallyincorrect.org/c/diplomat-artist By Ambassador Muhamed Sacirbey – Follow @MuhamedSacirbey Facebook = Become a Fan at “Diplomatically Incorrect” Twitter – Follow us at DiplomaticallyX