Mr Netanyahu said he was "perfectly open" to a meeting that might be "potentially useful".

He also defended a massive security deployment in Jerusalem following a wave of knife attacks by Palestinians.

Near-daily attacks have left seven Israelis dead and dozens wounded over the past fortnight.

Several of the attackers were among at least 30 Palestinians who have been killed in recent violence.

Tensions between Israelis and Palestinians have been fuelled by clashes in Jerusalem, in the West Bank, and across the Gaza border, as well as the wave of stabbings.

"Right now as we can speak, we can meet - I have no problem with that - and we shall stop immediately this wave of incitement and attacks against Israel," Mr Netanyahu told a news conference on Thursday.

The Israeli leader said he was also willing to meet US Secretary of State John Kerry and Jordan's King Abdullah for talks to defuse the tension.

Violent clashes have erupted in East Jerusalem, the West Bank and Gaza Strip in recent days

The Palestinians have previously said they would not return to talks unless Israel halted settlement building in the West Bank and East Jerusalem.

Israel has built more than 100 settlements in the West Bank and East Jerusalem since it occupied the territories in the 1967 Middle East war. The settlements are considered illegal under international law, though Israel disputes this.

Mr Netanyahu also berated Mr Abbas for what he called inciting violence and telling lies about Israel seeking to change the status quo at a holy compound in East Jerusalem, known to Jews as Temple Mount and Muslims as Haram al-Sharif.

He said Israel was carrying out "executions of our children in cold blood", highlighting the case of a 13-year-old Palestinian boy, Ahmed Manasra, who was hit by a car after he and a 15-year-old stabbed two Israelis, one of them a 13-year-old boy, on Monday.

Mr Netanyahu rejected this as a "new big lie" in his news conference on Thursday, hours after his government released video and photos showing the boy alive in an Israeli hospital.

Israel released a photo of Ahmed Manasra alive in hospital, after Mahmoud Abbas said the boy had been "executed"

Israeli police on Wednesday began setting up checkpoints in Arab-majority parts of East Jerusalem, including one neighbourhood that was home to three of the Palestinians who carried out attacks on Israelis this week.

Israel's security cabinet had earlier authorised police to seal off or impose a curfew on parts of the city in a bid to stop "those who try murder and...all those who assist them".

It also announced that the homes of Palestinian attackers would be demolished within days and that their families' right to live in Jerusalem would be taken away.

The Palestinian leader said on Wednesday that Israel's security actions threatened "to spark a religious conflict that would burn everything".

Human Rights Watch has also condemned the new measures, saying they infringed on freedom of movement of all Palestinians.

But Mr Netanyahu defended Israel's actions, saying it was using legitimate force. Any country would do the same to deal with "people wielding knives, meat cleavers, axes, trying to kill people on their streets," he said. 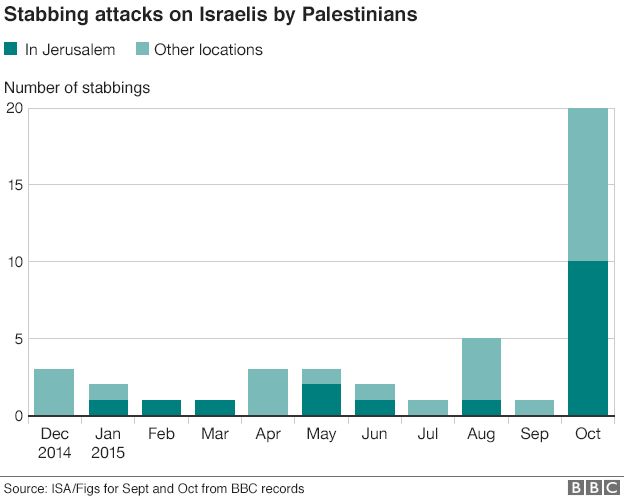 Despite the heightened security measures, there were two more stabbing incidents on Wednesday, and clashes between Palestinians and Israeli police in the West Bank city of Bethlehem and along the Israeli border with Gaza continued into Thursday.

Some 300 soldiers are due to be in place by Sunday to reinforce police forces in the city.

US Secretary of State is due to travel to the region soon, but details of his trip are yet to be revealed. 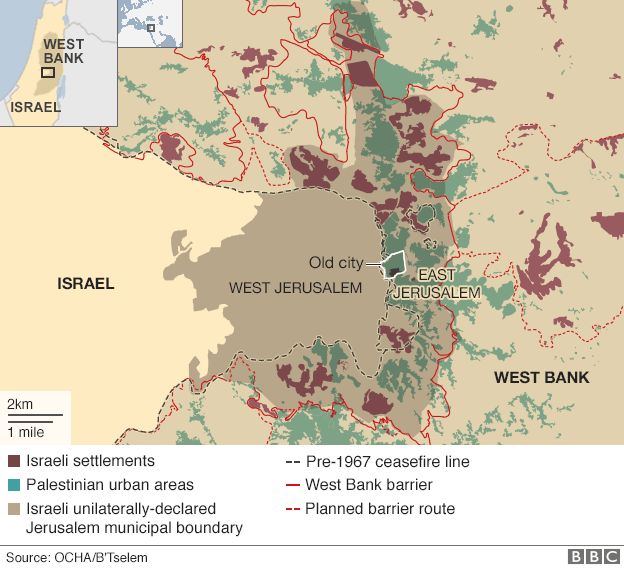 What is happening between Israelis and Palestinians?

There has been a spate of stabbings of Israelis - several of them fatal - by Palestinians since early October, and one apparent revenge stabbing by an Israeli. The attackers have struck in Jerusalem and central and northern Israel, and in the occupied West Bank. Israel has tightened security and its security forces have clashed with rioting Palestinians, leading to deaths on the Palestinian side. The violence has also spread to the border with Gaza.

What's behind the latest unrest?

After a period of relative quiet, violence between the two communities has spiralled since clashes erupted at a flashpoint Jerusalem holy site in mid-September. It was fuelled by rumours among Palestinians that Israel was attempting to alter a long-standing religious arrangement governing the site. Israel repeatedly dismissed the rumours as incitement. Soon afterwards, two Israelis were shot dead by Palestinians in the West Bank and the stabbing attacks began. Both Israel and the Palestinian authorities have accused one another of doing nothing to protect each other's communities.

Is this a new Palestinian intifada, or uprising?

There have been two organised uprisings by Palestinians against Israeli occupation, in the 1980s and early 2000s. With peace talks moribund, some observers have questioned whether we are now seeing a third. The stabbing attacks seem to be opportunistic and although they have been praised by militant groups, Palestinian leader Mahmoud Abbas has said Palestinians are not interested in a further escalation.

What is driving the latest violence?