Hello Bitlander friends! Today I want to review a movie that I was VERY STOKED to see! This movie was the ONLY movie I have seen in an actual theatre in AGES! The book is one of my favorites ever, and we'll talk about that in this review as well! Spoiler alerts folks, I am no good at telling such a magical story without giving away what happened in it's fullest, so buckle up! This movie is a supernatural  horror. 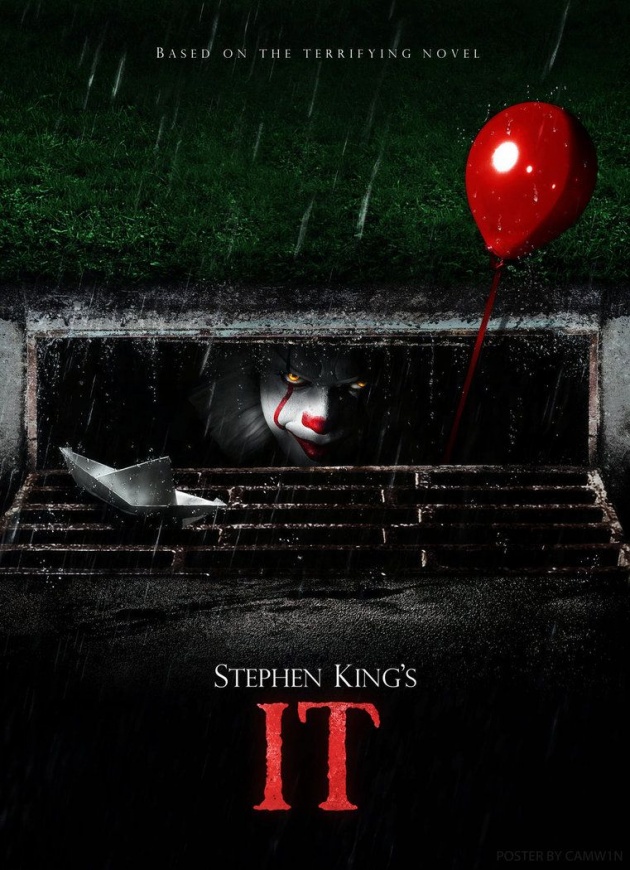 Based on the amazing Stephen King novel of the same name, "IT" [also known as IT:Chapter One" ] takes place in the small fictional town of Derry,Maine and opens on October 1988, as the book does, with a sick boy named Bill Denbrough and his seven year old brother Georgie, contsructing a paper boat to sail in the gutters of a small storm.

After being wished well by Bill Georgie goes to sail his little boat in the gutters only to have his boat sail into a sewage drain. In said sewage drain he meets Pennywise The Dancing Clown, who convinces him to reach for his boat in the drain, then grabs him by said arm and drags him into the sewers. 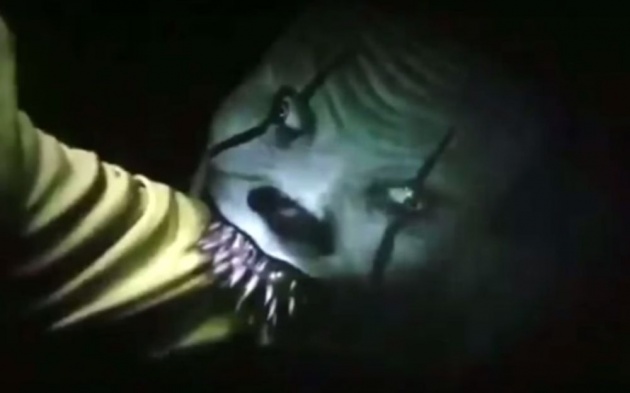 Pennywise In the Sewers

The next summer, Bill and his friends, referred to as "The Losers Club"- Richie Tozier, Eddie Kaspbrak, and Stan Uris- decide to go and investiage an area in town known as "the barrens" as Bill is convinced Georgies body may wash up there [as if yet his body has yet to be recovered]

Another child in Derry who is new to town named Ben Hanscomb, learns that the town itself has an unusual amount of violence death and tragedy in it's past, and that children go missing in Derry at a disproportionate rate.

Being a chubby boy, ben is targeted by the town bullies and their leader Henry Bowers. After a confrontation with the bullies, Ben hides in the barrens and meets "Big Bill" and his friends. He makes himself useful to the group and they feel a kindship to him as a fellow outcast. 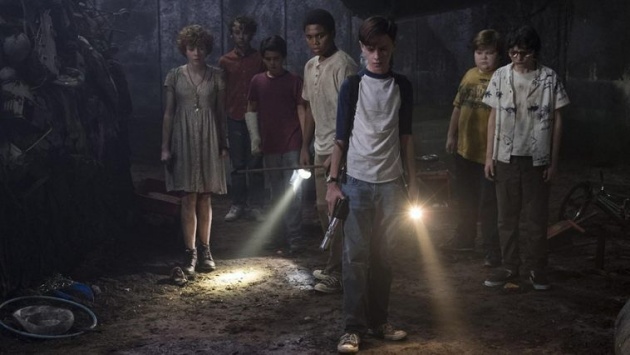 Shorlty after this point the children find the sneaker of a missing girl in town in the barrens, and a memebr of Henry Bowers bully crew, Patrick Hockstetter, is killed by Pennywise while searching the sewers for Ben.

The losers club adds another member named  Beverley Marsh, who is the only girl in the group and his ostracized by the town as being a slut. Both Bill and Ben have feelings for Beverley.  The last member to join the group is Mike Hanlon, whom The Losers Club save from the bullies. 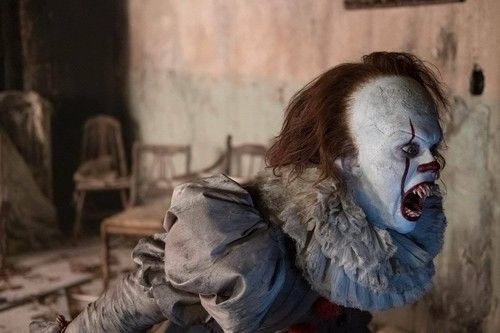 During all of this, every memeber of the group has encountered terrifying version of Pennywise. They see such things as headless people, blood fountains, paintings and videos coming to life, a man with leprosy and a phantom of Georgie. Mike also sees a vision of The Black Spot and the tragedy that befell it, and where, in the mvoie version, his parents died.

After sharing their stories of the phenomenon with each other, the children realize that the entity, whom they refer to as "IT" is a shapeshifter that comes out of hibernation every 27 years to feed on the people of Derry.

Looking at maps of the city and the sewage systems they find that Pennywise more than likely accesses the city through a well under an abandoned house at 29 Neibolt Street. 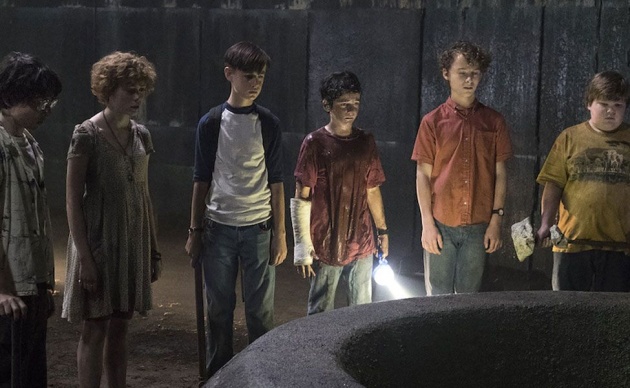 The Losers Club at the well

Shortly after being attacked agin by "IT" the children decide to go to 29 Neibolt Street and confront the creature head on. They end up separated and Eddie gets his arm broken, while Bill is taunted by Pennywise regarding Georgie. Beverley manages to impale Pennywise in the head, focring him to retreat to the sewers.

After this point the children are scared and the group begins to splinter. Only Bill and Beverley are left with real devotion to rid Derry of the monster. 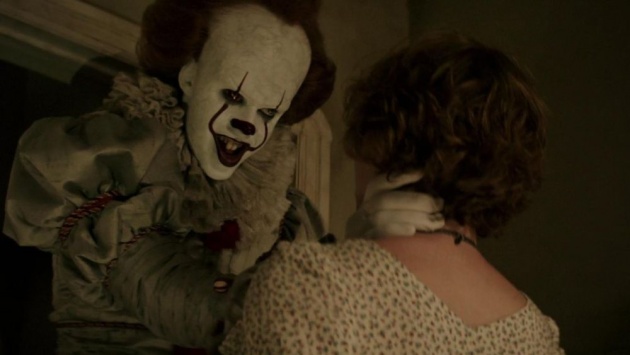 After some weeks, Beverley confronts her abusive father, and is abducted by Pennywise shortly after. The children come together and head to Neibolt Street to attempt a rescue.

Meanwhile Henry Bowers, head of the bullies, has gone mad from the influence of Pennywise and murdered his father. He attacks the Losers Club as they go to confront "IT". Mike pushes Bowers down the well to his "alleged" death.

The children head down into the sewers and find Pennywise's "nest" or lair. It is filled with old and rotted circus props and childrens items. On top of this all the missing children from town can be seen floating high above. Beverley is also floating with the missing children and is catatonic from looking into "IT"'s "deadlights".

She is restored to consciousness from a kiss from Ben.

Bill encounteres Georgie but knows it is Pennywise, who then attacks the group and takes Bill hostage. He tells the other children he will let them live if they let him keep Bill. The Losers Club refuse and overcome their fears and attack Pennywise. Pennywise retreats and Bill claims that "IT" will starve during hibernation this time.

As summer ends, Beverley reveals that she saw a vision while she was under the influence of the "deadlights" of all of them as adults fighting Pennywise. The children cut themselves and make a blood pact that if Pennywise comes back they will also come back and finish it once and for all. 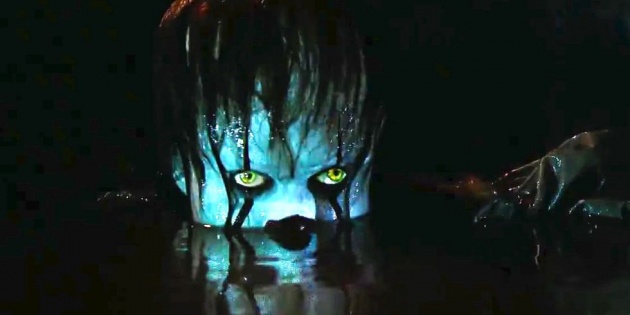 As a huge fan of the book I was very anxious going in as I expected them to screw it up horribly..

But it actually was pretty good!

My favourite thing about this adaptation was the atmosphere. They totally got the atmosphere of Derry as a poisoned town generally down in this movie, which is something that was missing from the original IT miniseries.

I also felt that the new style of "IT" the monster was well done. His new look really characterized his nature as an ancient creature, as his outfit embodies many eras of clothing in one look.

This was the best part for me. Although it wasn't perfect most of the main plot points were addressed in the movie, at least for part 1 of the novel. It was a bit hard for them to keep it completely true to the novel as they were only doing half of the novel for this movie, and the novel itself intermingles the past and future narratives of the characters as children and adults.

It may have just been the amount of time the movie had, but they didn't really explore the bond the group has that was the reason they could even challenge IT. They may go into it in Part 2 when they are adults, as in the book it is a huge factor as to why they are weaker fighting the monster as adults.

IT as a Shapeshifter

My only real complaints? I wish they had explored Pennywise as a shapeshifter a little more. In the book his favourite shape is that of Pennywise the Clown, but he is known to use many faces to get what he wants and to influence the town itself.

I also would have liked if they had not made Beverley as a character so...weak. She is a very strong character in the books and her kidnapping and subsequence saving with a "kiss" was a little Disney for me. I also didn't lik ethat she saw the "deadlights" and didn't just stay in a vegetative state. It was way too easy to return her to consciousness. The "deadlights" are IT's true macro form which is so complex and terrifying that looking at it makes you go mad. 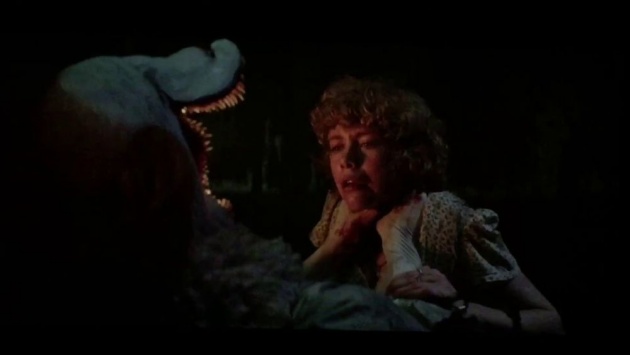 I give this movie at 4/5 stars though, because otherwise it was AMAZING.

The jump scares worked for this movie as IT is pretty sneaky and creepy. He likes to lurk.

The character was much more aggressive in the moive than the book but it still worked out really nicely. I am very happy I got to catch this on the big screen! It was so worth it!

Critics Consensus: Well acted, fiendishly frightening with an emotionally affecting story at it's core, IT amplifies the horror in Stephen King's classic story without losing touch with it's heart

And gave the movie an 85% scoring.

What do you think? What are your favorite kinds of movies?

What did you think of this movie? Let me know in the comments and thanks so much for reading!!