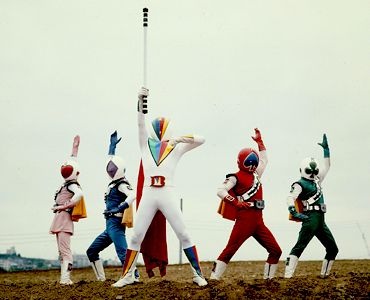 It was in the year 1977 that the manga artist Shoutarou Ishinomori, the creator of the Kamen Rider series, decided to work on another show after the huge success of Himitsu Sentai Goranger.

As the Criminal Organization Crime wants to become the most powerful mafia organization, Interpol created a special force that will combat them. The International Science Special Investigation Squad (ISSIS, 国際科学特捜隊, Kokusai Kagaku Tokusou Tai) organized their forces around the world to battle against Crime. Meanwhile in the Tokyo branch of ISSIS, Commander Daisuke Kujirai aka Joker, recruits four young test subjects for his cyborg enhancement project.

Gorou Sakurai / Spade Ace (Yoshitaka Tanba) -- an all around top athlete, and a skilled equestrian. He was the original leader of the team until Soukichi replaced him.

Bunta Daichi / Clover King (Yuusuke Kazato) -- a former oceanographer who died due to oxygen deprivation in a submarine accident.

Soukichi Banba / Big One (Hiroshi Miyauchi) -- a super cyborg and and the replacement of Joker when he was called to ISSIS in New York. He became the Mobilization Commander and a master of disguise.

Iron Claw -- the leader of Crime.

This is the first series which has no Yellow Ranger in it, thus the team started with four members. I don't see any problem with Gorou Sakurai being the leader, but still he was replaced by Soukichi Banba. This happened because of the rewriting of the series due to low ratings, they decided to put Hiroshi Miyauchi in, after his performance in Kaiketsu Zubat, and also a comic relief character Tamasaburou Hime (portrayed by Genpei Hayashiya) in hopes of higher ratings. But the series was cut to 35 episodes making it the shortest to date.

Several familiar faces appeared in this series like Kenji Ooba, Junichi Haruta, Shinji Toudou (who would land in a title role as Takuya Yamashiro in Toei's version of Spider-Man the following year) and Kouki Tanioka (who would later play as Gorou's successor being the Red Ranger in the next series, Battle Fever J).

Starting from episode 9, they had this very annoying battle cry (each had their short quotes) while fighting. They're the last series having color-coded helmets while in civilian forms like the ones in Goranger. This is also the first time of having a sword (used by Dia Jack) as a weapon.

When Soukichi Banba was added to the team, he has this habit of disguising just to distract their enemies then revealing himself. He usually later appears near the end of an episode. With this, the focus was transferred to Soukichi instead of the four. The four members were just like pawns until Big One joins them and gives the final attack. Their team attack JAKQ Coback was replaced by Big Bomber in which the other four holds the parts of the bazooka and Big One will load the missile.

As for the music, it's kind of funky, since this was the 70s. One of their themes, "Spade Ace, The Young Lion", was originally addressed to... you guessed it, Spade Ace. But it's instrumental version became Big One's arrival theme.

Right now, I'm down to the last five episodes, before watching their crossover movie with the Gorangers and also serves as the epilogue of both series. If the series followed the formula of Goranger, it would also be a successful series. It could also run for 50 or plus episodes. 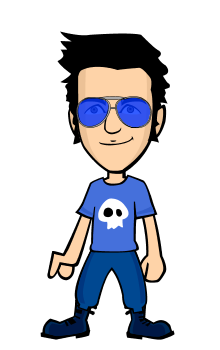 A computer engineer who loves to write anything within his imagination :)

It's that episode again wherein the heroes recall their past adventures. In the previous episode, Ya…

New Joker will be based from The Dark Knight Returns

The hype of Jared Letos new Joker in the upcoming film Suicide Squad, is growing more and more and e…

Chainsaw Massacre prank in the Bathroom

This is the time again of the year when Toei shows their title for the next year's Sentai series. Th…

Mullah Nasruddin was on the ground under a streetlamp searching frantically for his key. After awhil…