"Jam" - Why is it still my favourite?

Back in December 2011, I made my first ever 'real' narrative short film. It was the very start of my second year at university and the first term was given over to making a narrative film each. The only restrictions were that we had to work with the small crew of classmates assigned to us, and we could only have one day on location shooting and the finished film should be around 5 minutes long. Apart from that we had complete creative control. Everyone was SO excited to start this module, making films was what we were all there to do and you could feel the excitement in the air as we all started planning.

The result of my hard work for those few months was "Jam", a 5 minute black comedy about two elderly ladies who accidentally murder their local priest.

Two years on I have been involved in countless short films and Directed a few more myself, I am so proud of some of the work me and my friends on the course managed to achieve and my skills as a filmmaker have improved no end since I made "Jam". And yet when I look back at all my work so far I still regard that little first short I made as one of my best bits of work. But why?

I suppose the real answer is "Who knows?". Sometimes a film just clicks. But I have a few little theories as to why I love the film so much. Some of which were there on my other films, some of which were not. I am by no means an expert on any of this, just a young filmmaker writing as he learns.

I had one day to shoot, this meant I allowed myself 1 location and only 3 characters (one of which was dead). Its a story about a moment and the reaction to that moment. This is the main thing which I think changed in my later films at university, after this film I tried to get bigger and better, forgetting that bigger isn't always better. I was essentially trying to cram 30 minutes of story into 10 minutes. The stories spanned days and weeks, in "Jam" the story spanned less than an hour.
I have definitely come to realise recently that short films come in two varieties, "Short" films and "Mini-Feature" films. And both are fine, but you need to know which one you are making.
"Short" films are under 15 minutes long, they are smaller, focusing on moments, one singular story line with a beginning, middle and end.
"Mini-Features" are longer, perhaps 20 to 40 minutes long. They are Directors trying to prove that they have what it takes to tackle a longer and more developed story structure. They have main plots and sub-plots. Ensemble casts and supporting characters.

Jam was a "short" film in every way. And I think being simpler and more focused is a huge part of why it works.

I had initially written the script for Jam in my first year. We had an entire module ran by an experienced Script Supervisor guiding us through writing a script. I then chose to carry this script over into my next project and actually make it.
Im not saying Jam is the best script in the world, not at all. But the key thing is I really spent time and focus on it. At the time I didn't even know if I would ever make it so I wasn't thinking about production to much, I made sure it was feasible to make and then simply wrote. I spent months honing it as a story, tweaking the dialogue and the pacing, fleshing out the characters and trimming when it got too much. And above all I had fun while doing it!
As a result when it came to production I really knew the story back to front. I knew exactly how I wanted every line to be delivered, what I wanted to show the audience and what I wanted to hide from them. Rehearsals with my fantastic actresses Pat and Ann where my favourite part of the process. Sitting in my living room reading through the script with them was just fantastic. It changed so much in those sessions, together we tried different ways of delivering the lines to suit them as people and make it feel natural.

Jam had a punchline ending. In someways, it was a film written for its ending. On reflection, my other films were films written for their situations, finding an ending for them was simply a necessity. Whereas with Jam, the ending was one of the first bits of the story to fall into place. I played with a few options, but in the end I chose the simple option, a simple punchline, cut off before it finished leaving the audience to finish the joke themselves.
Our lecturer taught us about plant and payoffs within scripts and how important they are. If you don't know about Plant and Payoff's, simply they are when you add little hints into dialogue or action or scenery etc. (The plants). These normally go unnoticed by the audience at the time, but when an important action happens, like the killer revealing themselves etc. The audience understand why, they feel educated about whats going on instead of things just springing out of nowhere. Hopefully they get a feeling of "Oh of course!" (The payoff).
In Jam the ending has one very simple plant, the short conversation over the start of the film, Bea and Susan are entertaining guests tomorrow, and Susan didn't buy enough meat to feed them all. At the time its meaningless conversation, but by the end, its so much more than that. This is a basic, simple and obvious plant, but it was enough to make the film entertaining. A good writer will add loads, some obvious, some subtle and all very clever. But for me and my little short comedy, one simple plant and pay off was enough to ensure the film ended strongly and didn't leave the audience thinking "Is that it?". 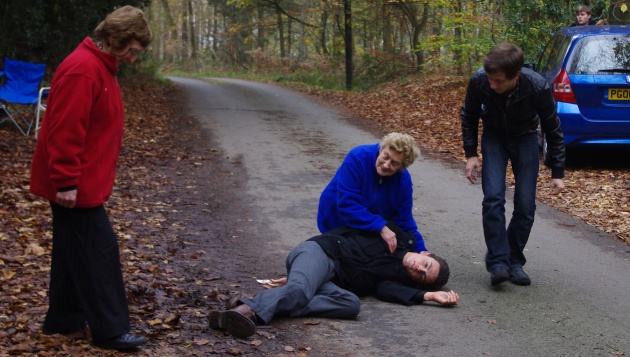 A last minute rehearsal while the crew set up. 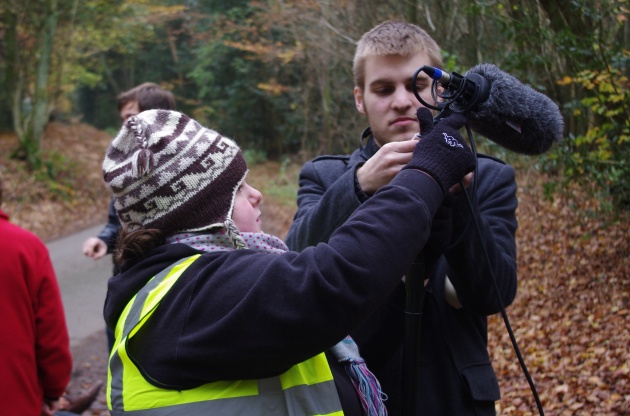 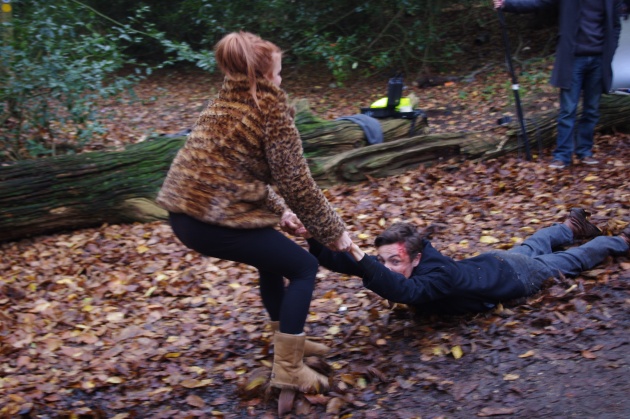 Best way to dirty an actor? Got to be real dirt. 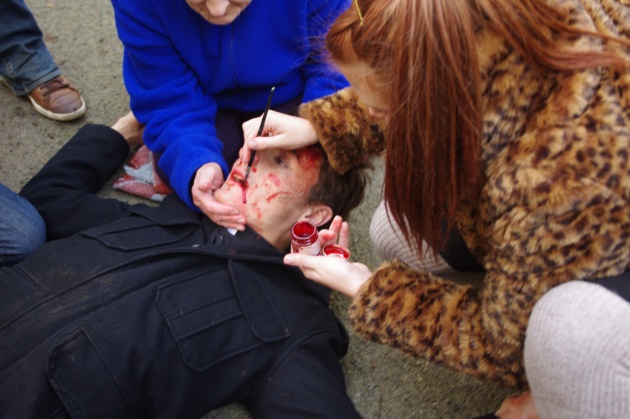 And then some real make-up is applied. 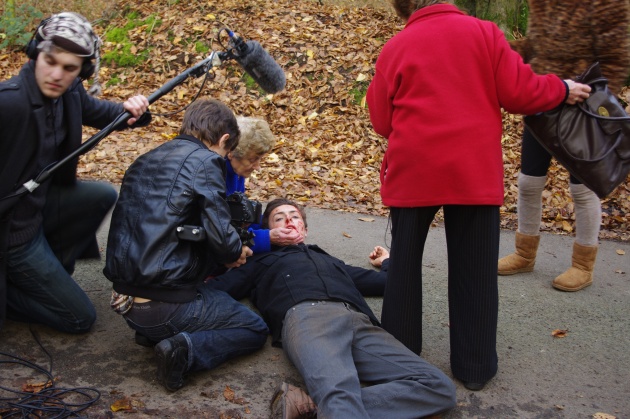 A small, compact crew & kit is sometimes all you need.

And here's the film:

Carl Yates is a freelance Lighting Cameraman/Director of Photography currently working in the UK. He has spent the last few years working towards a Media (Film) Production degree from Staffordshire University which has given him the chance to collaborate with many talented directors and be involved in over 30 short…