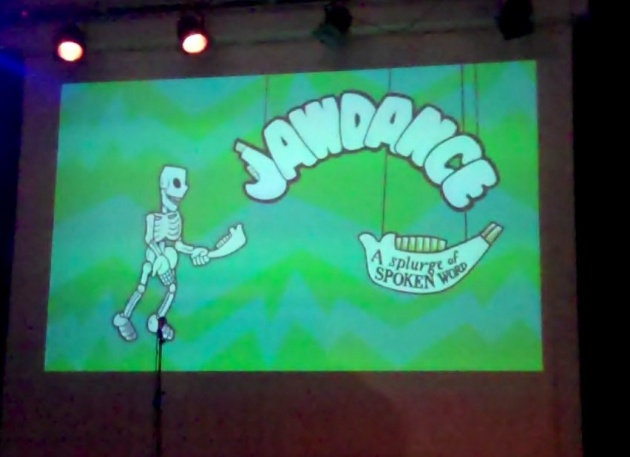 The open mic poetry fest that is Jawdance bore its pearly whites once more in East London’s Rich Mix Arts Centre and this time (27 November 2013), I got to perform. Alas, my Flip camera malfunctioned, so the only footage I have is of an empty stage.

In truth it wasn’t my best performance but then I only started my random versification that afternoon while I was in the kitchen serving my young un’s pie and potato. ‘Quick, my stanza’s boiling!’ I cried before looking at the dried out prose. ‘Ruined!’

A word about the MC - Kat Francois. No idea if that is her real name, but she was lively. ‘Anyone in tonight had something tragic happen to them?’ Silence. ‘Anyone had their heart broken?’ One hand went up. ‘Boys, she’s in the market. What are you looking for in a man?’ Pause. ‘Arty and funny.’ ‘OK, age range.’ Pause ’80? Don’t ask for that. We’ve got some oldies in tonight... 26. They have to be 26 or under. They got to be employed. OK.’ More on that later!

Kat played to the Afro Caribbean in the audience and gave good hallelujah. She then introduced the first act, Jazzman John, who was of course approaching 80. He found something to rhyme with Burnley, which let’s face it, is an achievement. I never wanted to go to Burnley, much less refer to it in verse. But I’m sure those who live there clutch it to their bosom. With a fry up!

Next up was a stand up comedian named Andy who was recording his poem for a radio show. ‘At the end, you have to cheer then I want another take when you boo, like I’ve bashed your cat in.’ What’s with cats? So he reads this poem about him not belonging here and there are so nifty rhymes and it’s quite accomplished. We cheer and boo.

Then came Brando, whom I recalled from my first visit. He works himself up. ‘Keep your lips in my sex –’ That’s quite enough of Brando. Last Tango in Rivington Road? Last can of Tango more like.

Then the first proper poet took the stage, by which I mean someone who had something to say. Kansas spoke a five minute long anti-Drone tone poem, taking the point of view of a two year old child about to be bombed before addressing a representative of the United Nations, now aged four. Kansas, a tall American, hands gesticulating, spoke about the drone ‘flying over a headless torso... each night you smell the rot of my limbless torso’. By the end, she was chanting, ‘We are the Drone.’ Huge applause!

‘That’s right, write it,’ cooed Kat. ‘You are like a psychiatrist with your pen. That’s a good phrase, I ought to write it down.’

Next was a film, the DJ’s Hands, set in a bathroom, in which the viewer was asked to trust the DJ’s hands, which if they belonged to the young man reciting the poem were covering his privates. Wash the DJ’s hands, more like.

Then there was me. I read out my collection of stanzas looking for a thread whilst my Flip camera flipped out. Nola read a poem and then Ollie, early 20s, green t-shirt, talked about how he set his grandfather on fire. This was followed by his poem about being told by an employment adviser to work in a National Park, only he could not Oak it. (My awful pun, not his.) A bearded guy got up and got very angry about football, footballers as rich men’s playthings. Very angry, but I would not want to socialise with him. Then came Raymond, talking about how he had joined a gated community. He was pitched outside one in his sleeping bag. He veered off into a diatribe why you should ‘never say never’, not even to setting you hair alight.

I missed out a woman who came from Bournemouth who read out a poem about being a Daughter of Islam and how we should not believe the news. In short, pretty much everyone hit the target. I need some work. Here’s my piece.

To say I love you

You cheated on me with a horse

You screamed at telemarketers

To meet your parents

Listen to their pockets

Change your make up

To mess up my words

Sit on the balconette

Look at the chip on her boulder

For the words in my head

I am not giving up the day job.

Hello guys, INTRO I'm here to talk about my passion of acting. I am an actor here in Montreal, Qc, …