The buzz this week in the film entertainment industry is the KickStarter campaign to turn Veronica Mars into a movie. The TV show, which ended in 2007, isn't the most popular show of all time. With an average of 2.5 million viewers and about 300,000 fans on Facebook, it arrives well behind top TV series like Seinfeld, 30 Rock or Family Guy. But on Wednesday, when Rob Thomas, creator and producer of the show, launched a crowdfunding campaign to turn it into a movie, he started writing a new chapter in the history of movie development. In just a few hours, the campaign broke several records: the highest goal ever set on Kickstarter, and the fastest project to hit $1 million and its goal of $2 million.

A few years ago, when a TV show was under the threat of cancellation by its network or studio, the fans would use online petitions and send them letters (via regular mail!) and sometimes thousands of symbolic objects related to the show in order to get their attention. Now, instead of buying thousands of bottles of Tabasco sauce and send them to the WB (as they did to save Roswell), fans chip in directly on crowdsourcing websites.

This case is the perfect illustration of how the film production and distribution industry is changing and using all the latest digital media tools for its development. Maybe one day, you'll follow a course called Social media and film financing 101: The case of Veronica Mars. Most films use online campaigns and social media platforms to promote the film while it's filming and especially during the release period. Now, producers and studios take it to a next level and use the Internet at the first stages of a project. The deal between Warner Bros, that still owns Veronica Mars, and Rob Thomas, was to agree to back up the project if he was able to show than the fans were on board. All Rob Thomas did was create the campaign, relay the info on the show's Facebook page, his personal Twitter and have Kristen Bell, main star of the show, share it on her own network, and it was done! The power of social media, right there. 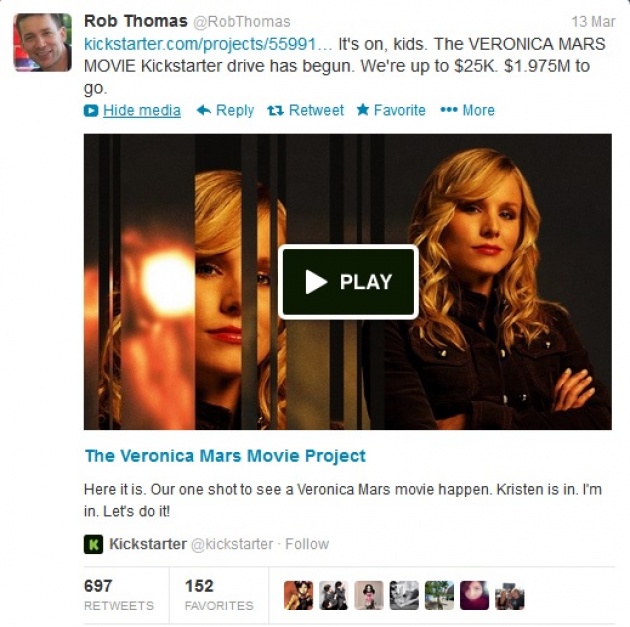 Film Annex isn't a crowdfunding platform. We finance our filmmakers via online advertising. But this is the real-life proof that the Internet, and in particular social media, are the future of film production, financing and distribution.

Now back to what happened this week... I wrote the Industry Newsletter, which focused on SXSW, Tribeca Film Festival, and, again, Veronica Mars. Our filmmakers also got the news about the last updates on their BuzzScore, which is now more fair as he only takes the most recent activity of the users and also gives more influence to the 'likes' given to their work by other people, compared to their own 'likes'.

Content-wise, we welcomed this week a Web TV with Asian movies and music videos, a new showreel by Studio Smack, a video of the Fuzzy Duck Creative team at work 9see below), and several videos for the US Navy Web TV. Filmmaker Ignacio Ruiz Alvarez filmed a message for students to encourage them towards a career in filmmaking, and Manny The Movie Guy sent us his last interviews with the cast and crew of Olympus Has Fallen and the movie review of The Incredible Burst Wonderstone.