This is hilarious. So, I'm sure that everyone in the world has seen a video on YouTube by now, but, have you ever clicked that little button below the video that says 'more'? Well, my friend, you are in for a treat. There's three choices: Report,Transcript and Statistics. Transcripts( I say to myself. Because there's no one else here)?
What could this possibly be?
Well, let's take a looksee right here. Click(that's me hitting the transcript button) loading...And then it appears.
Apparently YouTube and +Google have figured out some sort of super amazing Technology to tell us dummies what is being said in the videos. Only thing is...it's not amazing. 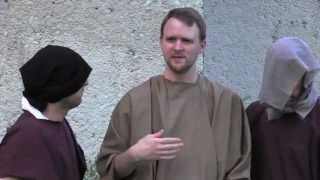 Here, just have a look for yourself at the Sasketchshow video for
Jesus of Nazareth:The Last Summer
Umm, I suggest reading along with it after watching it through once. Unless you've been one of the lucky few who have already laid your little eyes on the fantasticness that is Sasketchshow; I think it'll be even more an 'out of control chuckle' that way. You should believe me...I have absolutely no reason to pull your leg.

Ok. So you watched it through once? Good. Now, prepare yourself, get your scroll button ready, grab your reading glasses, a cup of  tea, hit replay and ready yourself for a little read along. It goes beyond ridiculous to the point where it probably should have been filmed this way. K, go...