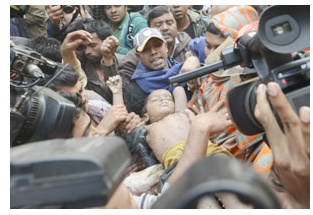 The body of four-year-old boy Jihad, who fell in a 600ft abandoned water pipe at Shahjahanpur in the city on Friday afternoon, was recovered, yesterday, by some mechanics, few minutes after the official rescuers Fire Service and Civil Defense officials postponed the rescue operation. Mechanics Farooque, Murad, Anwar and Rahmat, who had also taken part in the Rana Plaza building collapse rescue operation, pulled Jihad’s body out
with a net and a rope, at about 2.45pm, and handed custody to the fire service officials.
The body had several injury marks and was limp. Fire service officials could not confirm whether the boy was alive or not. Later, Dr Niaz Morshed, residential surgeon, Dhaka Medical College Hospital told The Independent the child had been brought dead at about 3.30pm. “However, we conducted necessary medical tests, before declaring him dead,” the doctor added.
The unfortunate incident, however, illustrated the competence of the four volunteers, who armed with a simple yet efficient device, beat the most sophisticated equipments, in tracing and extricating the boy from the water pipe. Sadly for all, it was too late by then.
The three rescuers, who had also volunteered in last year’s Rana Plaza tragedy in Savar, made the latest rescue with a net, a closed-circuit camera, a torch, a tri-stand and a cleat tied to a 600-feet-long rope.
At one stage, BNP standing committee member Mirza Abbas, who is also the BNP Dhaka City convener, came to the spot and alleged that fire service officials had failed to rescue the child.
Jihad, son of Nasir Uddin of railway colony, slipped into the deep well abandoned by the WASA, at about 4pm on Friday, while playing near the abandoned pump house.
Meanwhile, alleging authorities' negligence in rescuing the child, locals started vandalising shops and establishments on Bangladesh Railway land in Shahjahanpur area, after the body was recovered. The mob vandalised shops in Shahjahanpur kitchen
market, a tin-shed house, and attacked the Railway Super Market and demanded removal of the head of the rescue team and other officials involved.
The agitated crowd also demanded resignation of state minister for home, Asaduzzaman Khan Kamal, for stating, “According to camera footage, there is no one there.”
The minister’s statement had come 11 hours after rescue operations began.  Police swung into action to bring the situation under control. Police detained Nasir, the father of the victim, at Shajahanpur Police Station, around 3.30am yesterday, said duty officer Shyamol Debnath of Shajahanpur Police Station.  Senior police officials, including members of different intelligence agencies, interrogated him till 8am. SI Shyamol, however, did not say why Nasir had been detained.
The area where Jihad, along with his family members, lived in a residential area for class four railway employees. But Nasir had rented three rooms on the first floor of a building, on Tk. 5,000 monthly rent. There was no valuable furniture in the house. The reporter found some clothes of Jihad hanging in a room.
Many people visited the grief stricken residence yesterday, to console the family members. Reporters managed to talk to Jihad’s mother Khadiza, who lamented, “My son was too small to hold the rope in his hands. He tried, but failed repeatedly.”
“Did I hide my own child?” she asked expressing dissatisfaction with official rescuers, who had commented that the child’s falling inside the pipe was a rumour.
Earlier, Abu Sayeed Raihan, joint director, National Security Intelligence, termed the news of Jihad’s falling in the shaft as “rumour”, after seeing images sent by Dhaka Wasa camera.