Has anyone inspired you to do some things you’re doing today? We all look up to someone, they influence us to grow into the person we are today, and they become a part of us just like Julie's admiration for Julia. If you love cooking (or maybe just a foodie) and blogging, then you will love this based on true stories movie I will be reviewing—Julie & Julia! 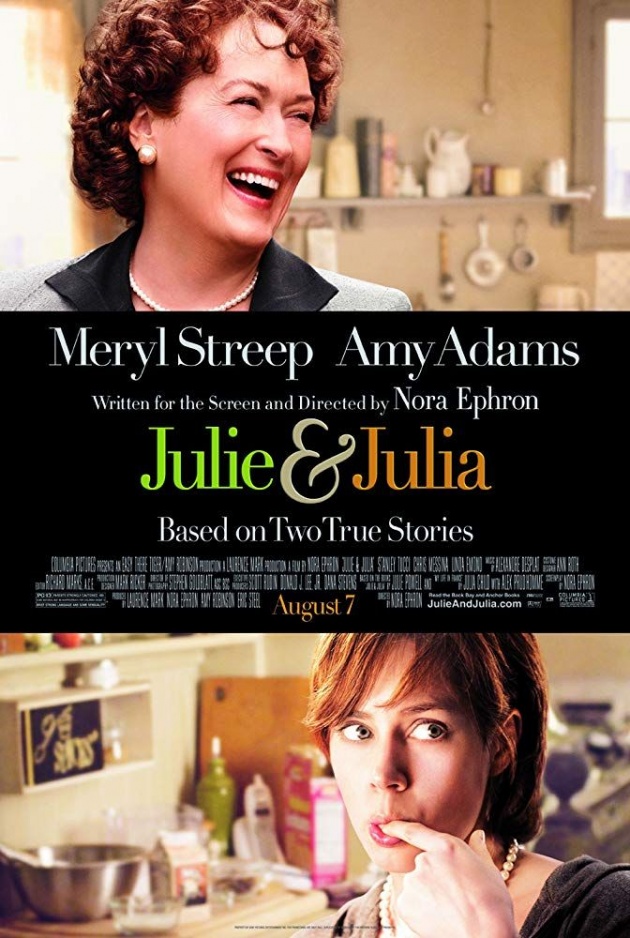 Julie & Julia is a romantic drama movie directed by Nora Ephron released on August 7, 2009 and distributed by Columbia Pictures. The film was written by Nora Ephron and was based from the books "My Life in France" by Julia Child and Alex Prud'homme, and "Julie and Julia" by Julie Powell.

Julie Powell works as a call center agent at Lower Manhattan Development Corporation handling calls regarding the 9/11 tragedy. Stressed from her regular job, she wanted to do something she love. Being once a writer, she entered the world of blogging with a subject of doing a challenge by cooking the recipes in the book Mastering the Art of French Cooking by Julia Child. Julie challenged herself to cook all 524 recipes in the book in 365 days. Her blog was called "The Julie/Julia Project" with a caption, "Nobody here but us servantless American cooks..." (Here is Julie's exact blog site.)

On the other hand, the movie also shows the story of Julia Child’s struggle of being a housewife wanting to learn how to cook french cuisine and publishing a book about it for Americans. 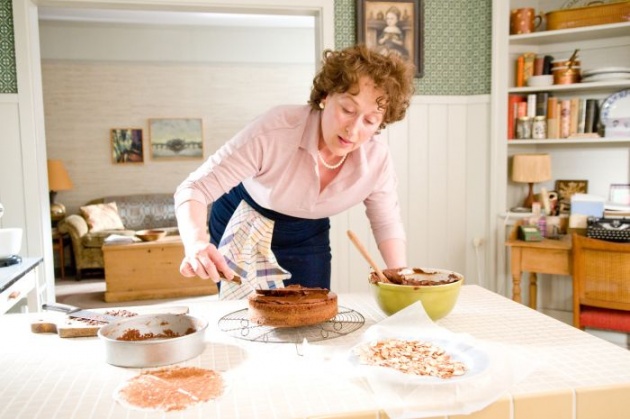 I always love it when the camera does a close up shot of the food being prepared. It highlights the main theme of the movie—food! The close up shot of the lobster in the paper bag when Julie peeked at it was hilarious. Meanwhile, the focus on Julie’s face to show her tears after she knew Julia’s opinion about her blog was heartbreaking.

I also like the different styles used to show the stories between Julie and Julia. Julia’s was set in 1940s and so the color was made soft to at least resemble an old video while Julie’s mostly have a dim lighting in my opinion. Well, most of Julie’s part was taken inside the apartment while she's cooking or blogging. 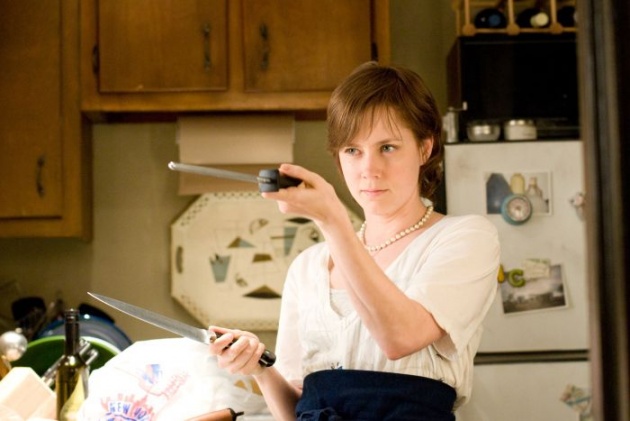 This is the second time I’ve seen Amy Adams in a movie and this time was very different from the first (Enchanted). As Julie Powell, she mostly have to act stressed out and frustrated. She did well on portraying Julie Powell and I can see Amy’s versatility in acting. 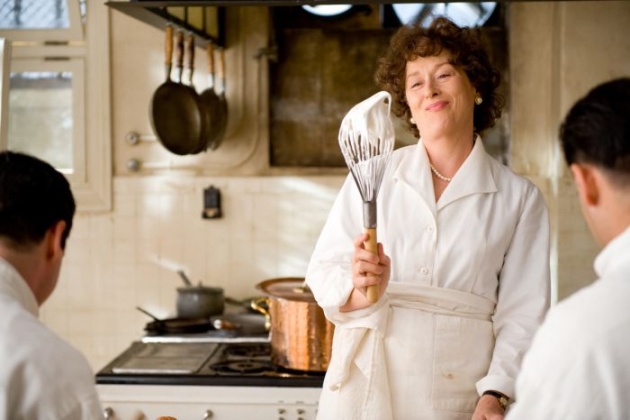 Meryl Streep, on the other hand, really did great on portraying Julia Child. Her kind face and accent on the movie won my heart. It's amusing to watch every time she cooks. After watching the movie, I searched for some feedback and found out that other people were also praising Meryl Streep’s acting. They say Meryl really resembles Julia Child. Reading all the comments made me curious and so I searched for an original video of Julia Child for comparison. To my surprise, they really do have resemblance! It felt like Meryl Streep is actually Julia Child. The nuances, accent, and her look. Everything of Meryl Streep in the movie is Julia Child.

The movie isn’t a musical film but there’s a song that I like in this movie. It’s "Stop The Train". This song was played while Julie was reconciling with her husband and getting back up to cooking after her mother called to encourage her to not stop cooking. Most of the songs in the soundtrack have an old style of music. I guess some songs used were really old. (You can check the entire list of soundtrack HERE.) 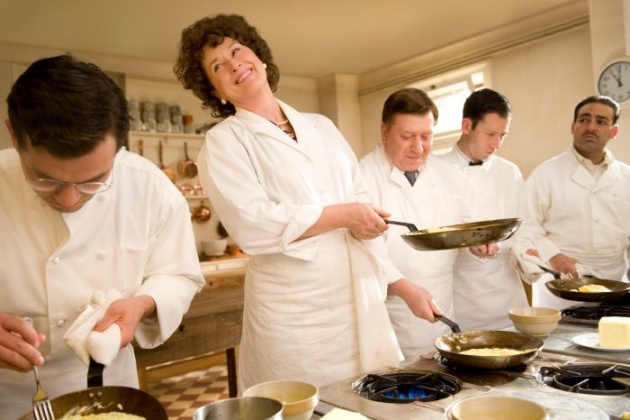 The Julie & Julia film clearly speaks about the power of women. Their strengths and capabilities.

"Find something you're passionate about and keep tremendously interested in it."
- Julia Child

Julia Child is a housewife who moved to Paris with her husband. She is an American and could hardly understand French. Bored of just being a housewife, she kept looking for something where she could do more and spend her time meaningfully. She enrolled on a hat making class then on a bridge class but both didn’t satisfy her, until she enrolled on a cooking class. Her decision of attending cooking class made her very happy because she loves eating. Aside from that, one of her goals was to teach Americans in Paris how to cook French foods and publish a book for Americans about French cooking since there was no French cookbook written in English during her time.

Julia strive hard and never listened to her detractors. From a housewife who barely knew how to cook, she became an expert on French cuisine. Her goals of publishing a book with the help of Simone and Louisette wasn’t that easy as well. Their work was rejected by some publishers because they think the book wasn’t much necessary. Plus, they think a 700-page book is too much when it's only especially intended for housewives. Of course, Julia didn’t give up and so her book got published after some time. She then became an important icon in the culinary world. Julia opened the French cuisine to the world. Julia changed the world and help women empower themselves through cooking. 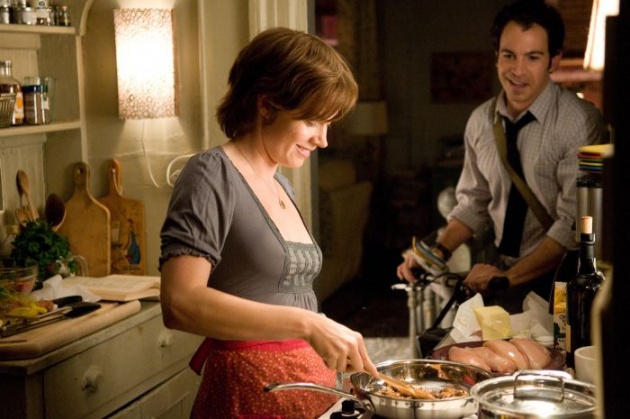 Next is the undying determination of Julie Powell. With Julia’s influence to the world, Julie also had her own influence to everyone. Cooking 524 recipes in 365 days was no joke. Through blogging her experiences on cooking Julia's recipes, Julie gained avid readers and eventually captured the attention of reporters, publishers, and more. Due to the success of her blog, her cooking journey was made into a book (published on September 22, 2003) then adapted into a movie, now we know as Julie & Julia.

Of course, their husbands did play a role on their success too. Julia’s husband was supportive all the way while Julie’s husband doubted her at some point but believed in her and still supported her in the end.

THE POWER OF WRITING 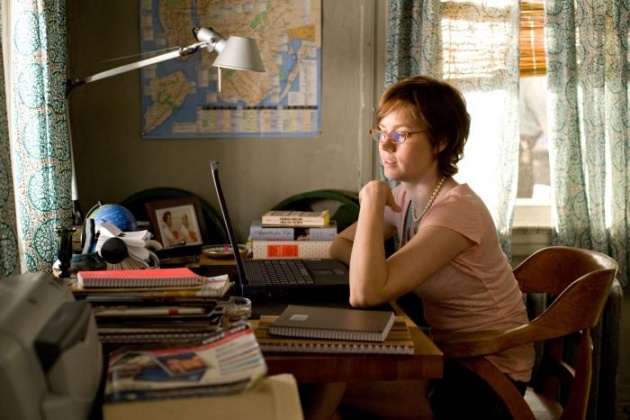 Both Julie and Julia had inspired and influenced the world through writing what they love. Julia through publishing a book while Julie through blogging.

If internet was already a thing during Julia's time, she would've used blogging as a means of spreading her idea as well. Since hard copy or paper is the only way before, she needs to have it published for her ideas to reach many people. It went through a tremendous process but it was all worth it because her book inspired so many people around the world over the years. For Julie who lives in the time of internet, she publicized her thoughts and ideas through blogging. It's much easier than publishing it into a book. It's also real-time and could reach so many readers all at once. However, with the convenience that comes with blogging, getting your blog to reach the readers is more difficult because of millions or maybe billions of blogs published on the internet. In the movie, Julie shows the joy and frustration of a blogger. (Maybe us here on bitLanders could relate to Julie's struggles in blogging. Well, I quite did.) Through constant blogging, Julie slowly attracted readers and inspired them day by day through the foods she make. It made her a popular and successful blogger with a large following, however, readers have their own share of opinions regarding her blogs. (Well, you can't please everyone.)

Honestly, I didn't know that Julia was still alive around Julie's time of blogging her recipes so the last part of the movie was a big surprise for me. (They never had the chance to meet, however.) Julie received a call telling that Julia, the author of the book she based her foods from was appalled with what she's doing. According to Julie in the movie, Julia hates her. But why? 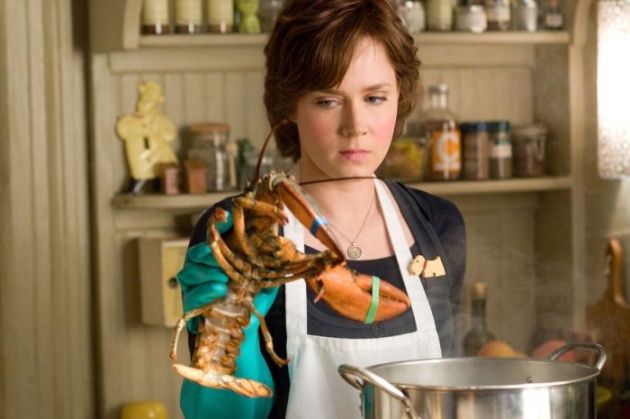 According to an article written by Russ Parsons of Los Angeles Times, he told that Julia thinks Julie doesn't seem serious on doing it and is probably not just good in cooking. She doesn't understand why Julie could have problems with the recipes when she had carefully tested those recipes for eight years and a lot of people have actually used her recipes with no problem.

Some people in the cooking world and those who knew of Julia Child's works have also expressed their disapproval on Julie's blog. Some even complained that the movie Julie and Julia should only focus on Julia's story. Of course, not everyone hates Julie. There are still those people who admired her dedication to do the 524 recipes.

I think Julie mentioned that she's not really a cook before beginning the project so people shouldn't hate her if she did mistakes on Julia's recipe in my opinion. But doing 524 recipes in a year, I'm sure Julie had already learned a lot after her project. 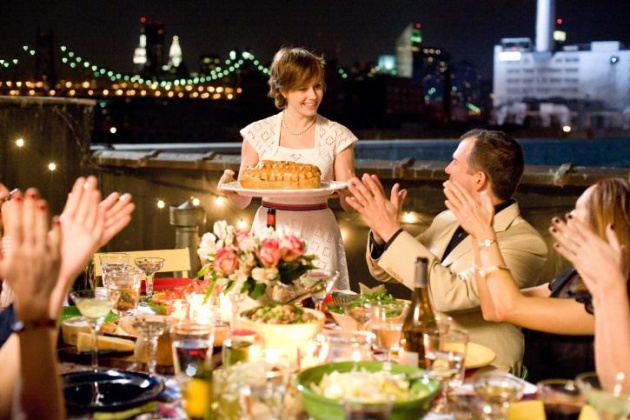 If there was something that made these women who they are today, it's their burning passion to do what they want to reach their goal. They kept challenging themselves, trying different recipes and techniques in cooking. Through their continuous practice, they became successful. Nothing is impossible with hard work, patience, and perseverance!

YOU CAN BE WHO YOU WANT TO BE! 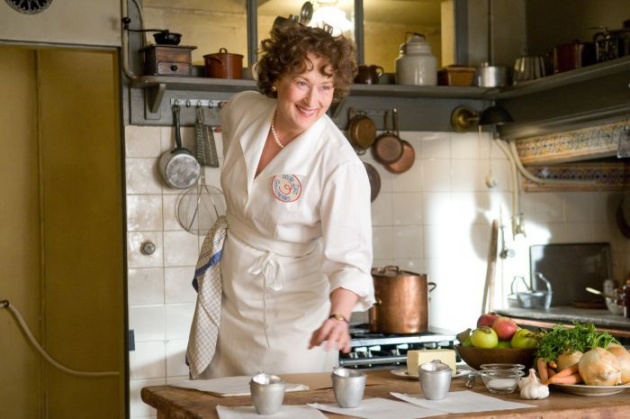 One thing I learned in this movie is that you can be whoever you aspired to be if you put every ounce of your passion in it. This movie is very inspiring for me and has a powerful message to everyone especially women. Actually, I was thinking of learning how to cook some dishes lately so seeing this movie is very timely for me. I admire Julie's dedication and I love everything about Julia. Bon appetit!