Women's empowerment is the process in which women elaborate and recreate what it is that they can be, do, and accomplish in a circumstance that they previously were denied. Alternatively, it is the process for women to redefine gender roles that allows for them to acquire the ability to choose between known alternatives whom have otherwise been restricted from such an ability. – Wikipedia

I am a bit sad because I missed knowing Bitlander’s new project “The Bitlanders Film Series” when it’s started.  I should have written a blog about it and eventually enjoy the additional bonus rewards.  And this time I am already running out of time but I will do my best to finish a blog about one of the two films (Jupiter Ascending and The Wife) featured for the second round (September 3 to September 16).

I am planning to submit a blog for both films but unfortunately, I don’t have much time anymore and since I was able to watch the movie Jupiter Ascending, my blog for today is about it giving emphasis on women's empowerment, their hopes and dreams, their struggles and challenges.

Jupiter Ascending is both an Action & Adventure and Science Fiction & Fantasy movie, a 2 hour and 5 minutes film written, produced and directed by Lana Wachowski and Lilly Wachowski.  This wonderful movie was shown in theaters starting February 6, 2015 and considered as a box office bomb.

The movie was described as a cross between The Matrix and Star Wars and centers on Jupiter Jones (Mila Kunis) an ordinary woman whose destiny extends beyond earth.

Earth and countless other planets were established by families of transhuman and alien royalty for the purpose of later "harvesting" the resulting organisms to produce a type of youth serum for the elites on other planets. After the death of the matriarch of the House of Abrasax, the most powerful of the alien dynasties, her children, Balem, Kalique, and Titus, quarrel over the inheritance, with Balem inheriting an enormous refinery on Jupiter and Titus spending his inheritance on a lavish spaceship. - Wikipedia

Jupiter Jones played by Mila Kunis was born in Saint Petersburg Russia under signs that predicted future greatness, her genetic signature marks her as the next in line for the extraordinary inheritance that could alter the balance of the universe.

She was on ordinary cleaner before she knew about her destiny in Jupiter from Caine Wise played by Channing Tatum, a genetically engineered hunter, who was sent to Earth by Titus to locate her. 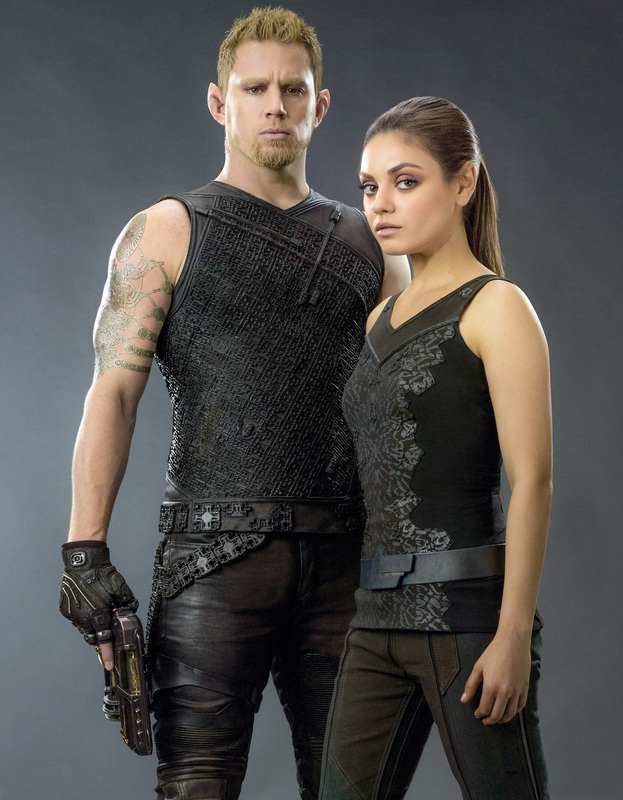 One day Jupiter and Katharine are attacked by extraterrestrial 'Keepers'; Jupiter was able to photographs the incident, but both of their memories of the incident was erased.

To buy a telescope, Jupiter agrees to sell her egg cells and she stumbles upon the strange photograph again while waiting at an egg donation clinic.

Later Jupiter knew during the procedure, that the doctors and nurses are actually keepers who were sent to kill her, and that time she was saved by Caine Wise.

After a series of attacks, Caine realizes that Jupiter must be of great significance to both Titus and Balem, whom he knows to have sent the Keepers to Earth to capture Jupiter.

One day Jupiter discovers that she can control the bees and that proves her to be a galactic royalty. Later a group of hunters who were hired by Balem capture her and take her to Kalique's palace on a distant planet.

Again Caine saves her from Kalique, and takes her to the intergalactic capital planet to claim her inheritance, she was destined and identified to be the rightful owner of the earth.

On the way back to Earth, Titus's soldiers capture Jupiter and Caine, Caine was detained and thrown into the void space as punishment for not bringing Jupiter to him as promised. That time Titus reveals to Caine his plan to marry and kill Jupiter and eventually claim Earth.

But Caine survived and returned to save Jupiter at the altar before she completes the marriage contract.

After a series of struggles and battles, Jupiter secretly retains ownership of the Earth. And Caine's rank in the Legion is restored.

The story ends with Jupiter and Caine being in a relationship.

Jupiter Jones is an ordinary cleaning woman whose father died I mean murdered when she was still in her mother’s womb.  She was named Jupiter after her father’s favorite planet.

Who is Mila Kunis?

Milena Markovna "Mila" Kunis is an American actress. In 1991, at the age of seven, she moved from Soviet Ukraine to the United States with her family. After being enrolled in acting classes as an after-school activity, she was soon discovered by an agent. – Wikipedia

Caine Wise is an interplanetary warrior a genetically engineered hunter who was sent to Earth by Titus to locate Jupiter, he was the one who informs Jupiter that her destiny extends beyond Earth.

Who is Channing Tatum?

Channing Matthew Tatum is an American actor. Tatum made his film debut in the drama film Coach Carter. His breakthrough role was in the 2006 dance film Step Up, which introduced him to a wider audience. He is known for his portrayal of the character Duke in the 2009 action film G.I. - Wikipedia

Titus who was spending his inheritance on a lavish spaceship is one of the three children of the matriarch of the House of Abrasax the most powerful of the alien dynasties.  He was the one who lured Jupiter to marry him but his plan is to kill her after the marriage and claim the earth.

Who is Douglas Booth?

Douglas John Booth is an English actor. He first came to public attention following his performance as Boy George in the BBC Two film Worried About the Boy. He also starred in the BBC adaptations of Great Expectations and Christopher and His Kind.  - Wikipedia

Personally, I really appreciate the characterization and special effects as well as the visuals and its originality.  Once you started watching it you don’t want to take a halt anymore but continue to watch until the end.

And what is more interesting with this movie is its deviation from male-centered stereotypes.  Here women empowerment is being emphasized.  Although the protagonist experienced struggles and challenges but in the end, with her hard work and determination she triumphs.

In the real world, women are being denied to elaborate and recreate what it is that they can do and accomplish.  Some are deprived of their rights and denied of holding positions in the society giving more importance to men.

And it’s even sadder to note that even as simple as driving is being denied from them. I can relate to this since I was working in Saudi Arabia for more than 10 years total and ever since their government are not allowing their women to drive, good to know that since June this year, they already opened their eyes and just like any other Muslim countries their women are already given the permission to drive after so many years.

With some other observations I had with their women, I can say that they were empowered, they are already seen in most establishment holding different positions, and I think even in their government offices.

Overall, the movie was able to depict a woman's struggle and empowerment and it's a must-see movie of all time.

Please watch this movie trailer below to appreciate more:

Kindly check and participate in these querlo chat below to know more about women empowerment and some facts about movies:

SO THERE YOU GO WITH MY FIRST ENTRY TO THE "The Bitlanders Film Series" PROJECT OF BITLANDERS WHICH AIMS TO SUPPORT WOMEN EMPOWERMENT, WATCH OUT FOR MORE ENTRIES SOON...