Jynx, a brief history on the most controvercial Pokemon ever

Greetings everyone, I was at the coolest mall I've ever been to (read about it in this old blog from before I found bitlanders/film annex to learn what makes it so cool). Well when I was in the import shop, I found this. 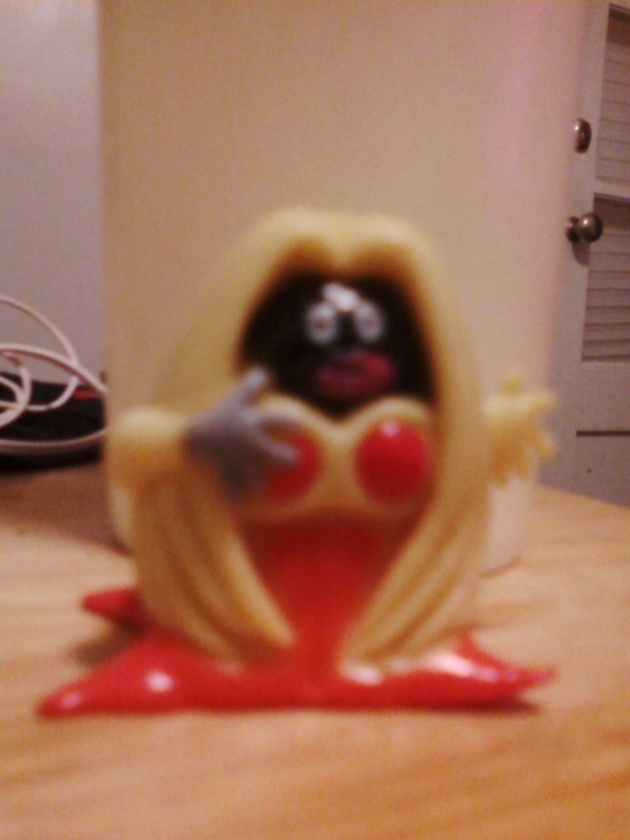 It uses this design of Jynx encase you can't tell from my blurry cell phone picture.

I had to have it, so I spent the $4 to buy this 1 inch figure. So what makes this so special? It's rather small. The left hand is missing the paint color. It's not the best crafted figure ever. It's rather old, about 16 years, but there are plenty of other toys like that. Why is this worth $4? Look at the color of it's face. Look closely at it. I'll add an image so you can see what the current design looks like.

Yeah, the current design has a purple skin color, but in gen 1, it's skin color was black. That's not an issue in an of itself, but the black skin combined with the red lips caused some people to call racism on Jynx, specifically Carole Boston Weatherford. She lead a campaign against Jynx and Mr. Popo calling them racist caricatures in the style of Blackface, see below for an example.

Because of this, Nintendo altered the design of Jynx so its features were less like the racist blackface. All incarnations of Jynx were changed from black skin to purple skin, as you can see in this photo.

OK, so this controversy happened in 2000, it's been 14 years since it happened. Well if you remember, Pokemon may have been around in Japan since 1995, it's only been in the US since late 1998, this means that there was only about 1 year for my toy to be released to the public. Not to mention, this design hasn't been used in 14 years. This toy is rather rare, and are super difficult to find in the wild. The store had many different Pokemon figures, each with multiple copies of the same figure. However, there was only 1 of these figures available. Finding a toy with this depiction of Jynx "out in the wild" is quite rare. It's kind of like finding a copy of Conkers Bad Fur Day at a garage sale. If you want more information on it, check out this video I made back in high school. Well this has been Pokematic, signing off and bu-bye.