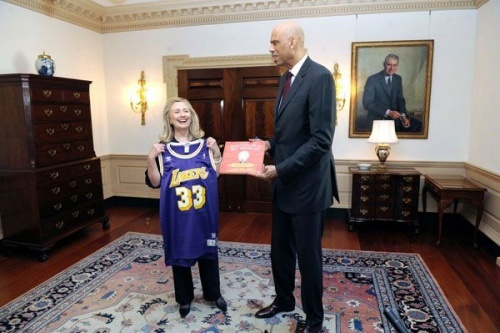 He is much more than a tall man or one of the greatest basketball players. He became a Muslim and appeared in a beer commercial. He advocated marijuana legalization and spoke with clarity and eloquence in style and intellect on history and science. He is quiet by nature but never lacked courage to speak his mind about injustice, but mostly toward others. Kareem grew through and out of the shadow of racism only to find himself despised by too many for adopting a new religion and name – and that was before Islamophobia. He should have been an NBA head coach, but some suspect he was “blacklisted.” Instead, he took over coaching a young Native American school team on a Reservation. (Below press release from State Department does not do enough justice - and perhaps never could - to a broad range of contributions, and not just African-American or Islamic). Washington needs ambassadors, unofficial and official, like Kareem more than he needs the responsibility and honor. Kareem will always be recalled as one of greatest, and in my opinion greatest college and professional basketball player when the quality of player and full integration finally caught up with the sport. There is though a new challenge though, and one suited for the demeanor and openness of mind and soul like Kareem Abdul Jabbar. On the basketball court, Kareem was an artist – he is now officially a Diplomat-Artist. Bellow is Press Release from US State Department this week. Congratulations to Kareem and the US State Department for vision to see it and make it happen: By Ambassador Muhamed Sacirbey Facebook – Become a Fan at “Diplomatically Incorrect”    Twitter – Follow us at DiplomaticallyX  “Diplomat Artist” Channel FOLLOW Mo on Twitter @MuhamedSacirbey Secretary of State Hillary Rodham Clinton met with Hall-of-Famer Kareem Abdul-Jabbar, (January 18, 2012) the NBA’s All-Time Leading Scorer and a New York Times’ best-selling author, to discuss his new role as a global Cultural Ambassador. During the meeting, Secretary Clinton reiterated the United States’ strong commitment to engaging young people worldwide and to using people-to-people diplomacy as a means to create opportunities for greater understanding. Secretary Clinton and Kareem Abdul-Jabbar discussed his upcoming trip to Brazil as a Cultural Ambassador and the strong relationship between the people of the United States and Brazil. “I am excited and honored to serve my country as a Cultural Ambassador for the U.S. Department of State,” said Kareem Abdul-Jabbar who has focused his efforts after his NBA career on engaging youth through socially-minded projects and education. “I look forward to meeting with young people all over the world and discussing ways in which we can strengthen our understanding of one another through education, through sports, and through greater cultural tolerance.” From January 22-28, Kareem Abdul-Jabbar will travel to Brazil to meet with underserved youth in Salvador and Rio de Janeiro. As a Cultural Ambassador, Abdul-Jabbar will lead conversations with young people on the importance of education, social and racial tolerance, cultural understanding, and using sports as a means of empowerment. In addition, he will participate in basketball clinics with young people in both cities. Since his retirement in 1989, Abdul-Jabbar has devoted himself to projects focused on African American history and socio-economic justice. His 2011 documentary “On the Shoulders of Giants” sought to highlight these issues. He has also launched the Skyhook Foundation, which works to improve children’s lives through education and sports. In June 2011, Abdul-Jabbar was honored at the White House by President Barack Obama and received the Lincoln Medal from U.S. Attorney General Eric Holder. The medal honors Abdul-Jabbar’s commitment to education and equality which reflects the legacy of President Abraham Lincoln. More information regarding Abdul-Jabbar’s travel to Brazil will be forthcoming. He will continue his public service as a Cultural Ambassador throughout 2012. Information on upcoming trips will be released at a later date. Stay tuned for updates via Twitter at @ConnectStateGov.