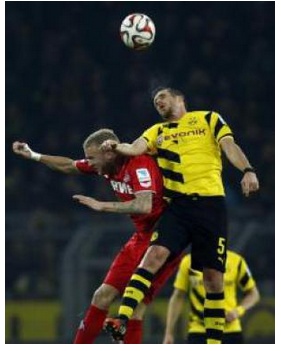 The 35-year-old Kehl scored his first German Cup goal when his fierce drive from outside the area put Dortmund in the semi-finals for the third time in four years.

"That was an amazing shot," said Dortmund's director of sport Michael Zorc.

"All in all, we deserved to be a goal better and that win is good for the soul."

But Hoffenheim goal-scorer Kevin Volland could not hide his disappointment.

"When you lose because of a Sunday league goal like that, then it's really bitter," said the 22-year-old Germany international.

Kehl's speculative half-volley flew perfectly off his boot and into the Hoffenheim net on 107 minutes to the delight of home fans at Borussia's Westfalenstadion.

Dortmund coach Jurgen Klopp showed his delight at Kehl's winning goal as he doffed his cap on the sidelines in the direction of the ex-Germany international.

Dortmund had taken an early lead but Neven Subotic's goal was almost immediately cancelled out by Hoffenheim's Volland.

Brazil international Roberto Firmino put Hoffenheim 2-1 up at half-time before Pierre-Emerick Aubameyang equalised midway through the second-half. It stay 2-2 at the end of normal time.

With holders Bayern Munich at Bayer Leverkusen on Wednesday and third-division Arminia Bielefeld hoping for an upset against Borussia Moenchengladbach in the other last eight ties, Dortmund join VfL Wolfsburg in the draw for the semi-finals.

Dortmund, who last won the German Cup in 2012, went ahead after centre-back Subotic smashed his shot in off the post with 19 minutes gone.

The lead lasted just 102 seconds as winger Sebastian Rudy floated in a deep corner which found attacking midfielder Volland unmarked at the edge of the area to slam his shot home.

The hosts then found themselves 2-1 behind after 28 minutes when Subotic stumbled in possession only to see Brazil striker Firmino dart onto the loose ball and chip Dortmund goalkeeper Mitchell Langerak.

Borussia, who were missing captain Mats Hummels with a thigh injury, equalised when right-back Erik Durm put in a great cross and Aubameyang beat Hoffenheim centre-back Tobias Strobl to the ball to head home on 57 minutes.

Both sides had their chances late on as Aubameyang and Subotic fired wide while Eugen Polanski forced Langerak into a diving save and Firmino drilled his shot just past the post.

At the end of normal time, Dortmund's Jakub Blaszczykowski forced Hoffenheim goalkeeper Oliver Baumann into a diving save.

Kehl's winner settled the matter in extra-time, but Hoffenheim captain Andreas Beck could have made it 3-3 when he headed over the bar with the 120 minutes up.

Earlier, Wolfsburg took a step towards their first silverware since winning the 2009 Bundesliga title when a Ricardo Rodriguez penalty sealed their 1-0 quarter-final win at home to Freiburg.