The Kaaba or Ka'aba (Arabic: الكعبة‎‎ al-Kaʿbah IPA: [alˈkaʕba], "The Cube") also referred as Kaaba Muazzama (Grand Kaaba), is a building at the center of Islam's most sacred mosque, Al-Masjid al-Haram, in Mecca, al-Hejaz, Saudi Arabia. It is the most sacred Muslim site in the world.[1] It is considered the "House of God" and has a similar role as the Tabernacle and Holy of Holies in Judaism. Wherever they are in the world, Muslims are expected to face the Kaaba when performing salat(prayer). From any point in the world, the direction facing the Kaaba is called the qibla.

The sanctuary around the Kaaba is called Al-Masjid al-Haram (Sacred Mosque).[2]

One of the Five Pillars of Islam requires every Muslim who is able to do so to perform the hajjpilgrimage at least once in their lifetime. Multiple parts of the hajj require pilgrims to make tawaf, thecircumambulation seven times around the Kaaba in a counter-clockwise direction. Tawaf is also performed by pilgrims during the umrah (lesser pilgrimage).[1] However, the most interesting times are during the hajj, when millions of pilgrims gather to circle the building on the same day.[3][4] In 2013, the number of pilgrims coming from outside the Kingdom of Saudi Arabia to perform hajj was officially reported as 1,379,531.[5] In 2014, Saudi Arabia reported having completed Hajj permits for 1,389,053 international pilgrims and 63,375 for residents

The wall directly adjacent to the entrance of the Kaaba has six tablets inlaid with inscriptions, and there are several more tablets along the other walls. Along the top corners of the walls runs a green cloth embroidered with gold Qur'anic verses. Caretakers anoint the marble cladding with the same scented oil used to anoint the Black Stone outside. Three pillars (some erroneously report two) stand inside the Kaaba, with a small altar or table set between one and the other two. (It has been claimed that this table is used for the placement of perfumes or other items.)Lamp-like objects (possible lanterns or crucible censers) hang from the ceiling. The ceiling itself is of a darker colour, similar in hue to the lower trimming. A golden door—the Babut Taubah (also romanized as Baabut Taubah, and meaning "Door of Repentance")—on the right wall (right of the entrance) opens to an enclosed staircase that leads to a hatch, which itself opens to the roof. Both the roof and ceiling (collectively dual-layered) are made of stainless steel-capped teak wood.

A drawing of the Kaaba. See key to the left.

A technical drawing of the Kaaba showing dimensions and elements

Pilgrims performing Tawaf
Each numbered item in the following list corresponds to features noted in the diagram image, on right.

Al-Ħajaru al-Aswad, "the Black Stone", is located on the Kaaba's eastern corner. Its northern corner is known as the Ruknu l-ˤĪrāqī, "the Iraqi corner", its western as the Ruknu sh-Shāmī, "the Levantine corner", and its southern as Ruknu l-Yamanī, "the Yemeni corner".[1][12] The four corners of the Kaaba roughly point toward the four cardinal directions of the compass.[1] Its major (long) axis is aligned with the rising of the star Canopus toward which its southern wall is directed, while its minor axis (its east-west facades) roughly align with the sunrise of summer solstice and the sunset of winter solstice.[13][14]
The entrance is a door set 2.13 m (7 ft) above the ground on the north-eastern wall of the Kaaba, which acts as the façade.[1] In 1979 the 300 kg gold doors made by chief artist Ahmad bin Ibrahim Badr, replaced the old silver doors made by his father, Ibrahim Badr in 1942.[15] There is a wooden staircase on wheels, usually stored in the mosque between the arch-shaped gate of Banū Shaybah and the Zamzam Well.
Meezab-i Rahmat, rainwater spout made of gold. Added in the rebuilding of 1627 after the previous year's rain caused three of the four walls to collapse.
Gutter, added in 1627 to protect the foundation from groundwater.
Hatim (also romanized as hateem), a low wall originally part of the Kaaba. It is a semi-circular wall opposite, but not connected to, the north-west wall of the Kaaba known as the hatīm. This is 90 cm (35 in) in height and 1.5 m (4.9 ft) in width, and is composed of white marble. At one time the space lying between the hatīm and the Kaaba belonged to the Kaaba itself, and for this reason it is not entered during the tawaf. According to western scholars the space contains the remains of Hagar and Ishmael as it is called hidjr Ismail[16]
Al-Multazam, the roughly 2 meter space along the wall between the Black Stone and the entry door. It is sometimes considered pious or desirable for a hajji to touch this area of the Kaaba, or perform dua here.
The Station of Abraham (Maqam Ibrahim), a glass and metal enclosure with what is said to be an imprint of Abraham's feet. Abraham is said to have stood on this stone during the construction of the upper parts of the Kaaba, raising Ismail on his shoulders for the uppermost parts.[17]
Corner of the Black Stone (East).
Corner of Yemen (South-West). Pilgrims traditionally acknowledge a large vertical stone that forms this corner.
Corner of Syria (North-West).
Corner of Iraq (North-East). This inside corner, behind a curtain, contains the Babut Taubah,Door of Repentance, which leads to a staircase to the roof.
Kiswah, the embroidered covering. Kiswa is a black silk and gold curtain which is replaced annually during the Hajj pilgrimage.[18][19] Two-thirds of the way up is a band of gold-embroidered Quranic text, including the Shahada, the Islamic declaration of faith.
Marble stripe marking the beginning and end of each circumambulation.
The station of Gabriel.[20] 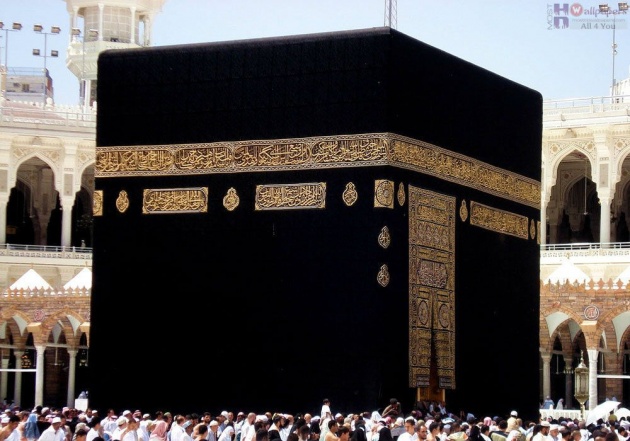