KITCHEN FIRE - MY FIRST AND WORST EVER EXPERIENCE IN MY LIFE - SAFETY FIRST PLEASE!

A couple of days ago, I came across an experience I will never forget. We keep hearing that fire broke out in a  house - besides short circuit of electricity, the major factor is kitchen fire which spreads quickly since most of the time it is the warmest place in a house. 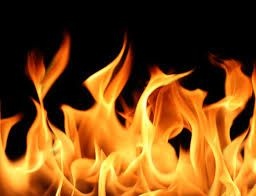 What actually happened and what were the consequences?

I actually wanted to fry chicken - I had only two leg pieces so I thought to use a pan, made of stainless steel, think in shape (actually, I HARDLY or almost NEVER use this pan). I poured the oil and thought it might take at least 2-3 minutes for oil to be heated. I thought I would go to toilet and come back right at time when the oil would be heated and I can just put the chicken in it.

As soon as I reached the kitchen (probably the air with movement stirred something), the pan got fire. The flames were so high that it could burn the ventilator and light system above the stove. I saw the black smoke all over, and I could hardly breath. I got panicked! Since I am not trained in putting off fire of different kinds, I thought I would put water in the pan so that the fire it put off. But, as soon as the oil and water got mixed, the flames touched the roof of the kitchen and this is the point where my heartbeat started to skip on a regular basis. I did not care and took the pan off the stove, thinking I would take it down and put in the basin so it cools down. As soon as I lifted the pan, I felt the heat and the open window in the kitchen made it worse since the air made the flames coming towards me. I suddenly dropped the pan on the floor. 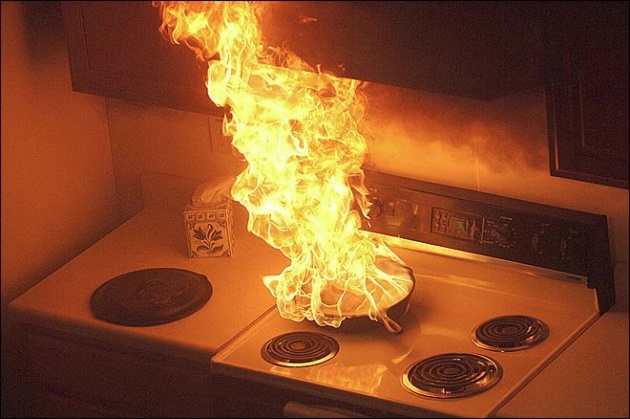 The oil fell on my feet and and arm, and I got burned. At first, I did not realise anything since I was in the state of panic, but after a minute, while I was trying to put off the fire, I felt the burning pain in my feet and the right arm. Worst thing happened that the floor, which is made of tree, got fire besides the carpet that is in the kitchen. I took a towel and started to put off the first on the carpet first and the floor. I got succeeded but still afraid if the heat would make the carpet catch the fire again so, I threw a whole bucket of water on it and put the towel on it. After a while (just after 5 seconds), I thought I might put off the fire in the pan while blocking the top by towel. I did it! But, after ten seconds, it caught the fire too. I took the towel and immediately threw it in the sink and started to put water on it. Now the question was, how to take the pan sorted since the fire did not stop and flames were as high as middle of the room and it could burn anything with heat around it, especially the carpet, cloth, cupboards, etc. As a last resort, I thought it was enough and took the pan, while in pain, and threw it into my garden underneath (we live on the first floor), from the windows. Now, I could not breath since the smoke started to infilterate into my lungs and I had to care for my two cats as well. I suddenly rushed towards all the windows of the house and opened each and every of them. Then I realised the pain was getting on my nerves and dipped my feet and hand into the water until I got the help. 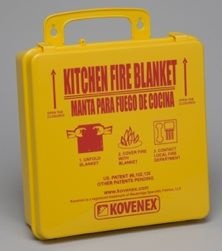 I am now thinking to do some fire fighting course and learn what to do at this occasion. Allah Ta'aala saved me from this disaster and I thank HIM for this. But, we ought to take some precautionary measures that can prevent us from such disasters. So, based on what I learnt, I would say:

1: Never ever use a stainless steel pot or pan to heat oil and leave it at any second - especially the pots and pans which are very thin - you may boil the water in it, but oil? NO NO!
2: Never ever put off fire caused by oil with water - water will make it worse.
3: If you don't see anything around like sand, etc. try to grab flour, etc. and put it in the pan that caught the fire.
4: Never use wet towel to put off the fire caused by oil.
5: Never use water to put off the fire caused by the oil.
6: Put the lid on the pan that caught fire (I learnt it afterwards - easy but in a state of panic, anything can happen).
7: Never heat the oil to boiling point - you can put anything before the smoke comes out of  it.
8: Only concentrate on cooking as soon as you turned the stove on - or turn it off if you are busy somewhere else.
9: Call the emergency IMMEDIATELY, instead of waiting for fire to be put off by self.
10: If can afford, buy a kitchen fire blanket.

Please share, maybe someone else might read and learn something out of it. Thank you very much and take great care of yourself, especially the ladies!