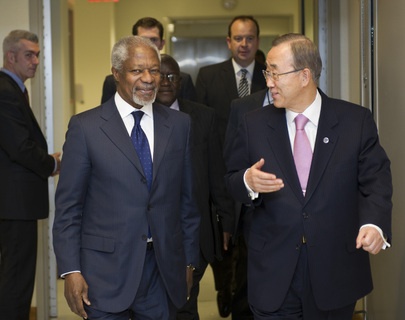 It’s a critical question that underpins the assumption of whether Bashar Assad has to leave or he will continue to be accorded legitimacy and thus prevail in perpetuating his hold on power. Because there is so little agreement within the UN Security Council as to who is responsible for the current state of Syrian affairs or how to proceed toward a solution, defining roles and processes/methodologies is even more critical. Most of the Arab League. And western democracies are of view that Bashar Assad must leave. Many are of the view that he would be indeed very fortunate to avoid prosecution for grave violations of international humanitarian law. On the other hand, mostly authoritarian regimes as China and Venezuela represent a small but powerful minority. They are anchored around the UN Security Council vetoes of Moscow and Beijing. They see in Assad perhaps not so much a friend but a precedent for their own efforts to perpetuate hegemony and degrees of totalitarianism. For some in China undoubtedly the Homs crackdown does not look so different from yesterday’s Thiamin Square or perhaps tomorrow’s revolts in Tibet or Xianjeng. While Moscow and Beijing had boycotted “Friends of Syria” meetings, they appear intent on defining Kofi Annan’s role in way that effectively secures legitimacy and enhances survival of Assad regime. The key term they employ and one which unfortunately Kofi himself used is “mediator.” From the Kofi Annan Foundation: “There must be one process of mediation (referring to his mission/himself)…when the international community speaks with one voice, that voice is powerful.” (Perhaps Mr. Annan also prefers term as it provides greater latitude for his role). Read at our Popular Blogging Site – “Kofi Annan Srebrenica Lesson to Syria” -“http://diplomaticallyincorrect.org/films/blog_post/kofi-annan-srebrenica-lesson-to-syria/46416 However, UK Ambassador Grant to UN promptly sought to correct the impression explicitly rejecting “mediator” but emphasizing role of “facilitating political transition” and ensuring the flow of humanitarian assistance. However, US Secretary of State Hillary Clinton may have also given Assad more legitimacy; Just as his assault upon Holms was intensifying, Ms. Clinton refused to commit to Assad’s prosecution as war criminal – thus tough US language on Syria came across more as bluff. (Part of Secretary Clinton’s dilemma is still US ambivalence regarding the International Criminal Court (ICC) and referring any Syria investigation and Assad prosecution to such Court). Beijing seems to have seized upon this sign of ambivalnce re ICC and declaring Assad as irretrievable war criminal. Thus Beijing urged that Kofi Annan “mediate without precondition.” All of that may seem like semantics and less critical than reaching a quick resolution to the conflict. However, employing the humanitarian emergency as leverage, Assad’s allies are now trying to establish the foundation for his legitimacy and perpetuated hold upon absolute power – remember the Referendum on a new Syria constitution held just lat week by the Syria regime that would effectively through legal formalism extend his hold until 2028. Even that might be acceptable to some just to see an end to fighting. However, this will not not end the killing or perpetual repression. Once having regained its hold, the Assad Baathist regime will do what it has done before – suppress all dissent and kill the leaders of an alternative political option. As the Syrian opposition has evolved into open civil-war, it is evident that only one side can win if the Assad Regime survives, while there at least is some hope that multiple views/political voices may come through if the opposition triumphs. Mediation with Assad will be usurped by that Regime to insure that ultimately only its voice prevails and that any remnants are figuratively and physically silenced. See more at our Popular Video Blogs & Current News Event Articles at www.diplomaticallyincorrect.org By Ambassador Muhamed Sacirbey – Follow @MuhamedSacirbey Facebook = Become a Fan at “Diplomatically Incorrect” Twitter – Follow us at DiplomaticallyX UN Photo from UN News Centre Film Online Video Multimedia – Kofi Annan meets this last week with UN Secretary General Ban Ki-moon