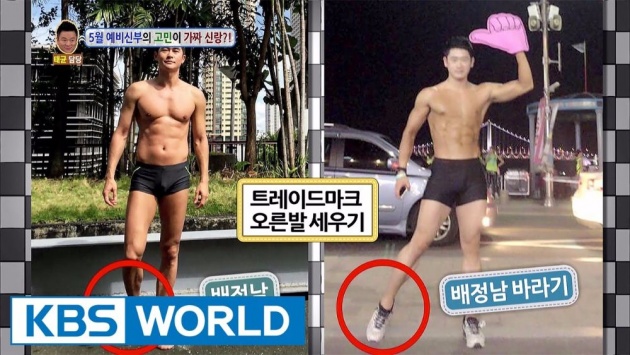 Hello guys~ LookUp again here :3 I come with new blog and new episode of "Hello Counselor" to review. In this blog I will discuss about the first concern, "A Fake Husband". If you want to know more about "Hello Counselor" you could read my old blog about it titled "Hello Counselor: The Problem Solver TV Show". Also read my review about other episode in here or here. Once again, do not get bored with my blog because I still have so many things to review :D I hope you could enjoy it. Happy reading~!!! 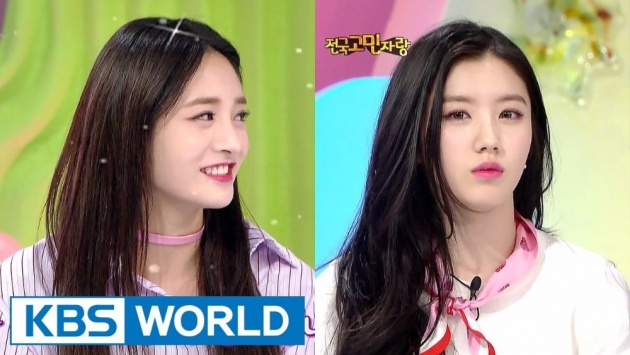 On this episode, "Hello Counselor" invites Park Dool-seon, Kyul-kyung and Si-yeon as the special guest. Based on Dramabeans, Park Dool-seon was born in 1976, with 178cm tall. She was the winner of Korea’s Super Elite Model competition in 1998 and Korea Fashion Association’s Best Model winner in 2001. Meanwhile, Kyul-kyung and Si-yeon is a member of the girl group from South Korea, PRISTIN, formerly Pledis Girlz. The group was formed by Pledis Entertainment in 2016. PRISTIN consists of ten members: Nayoung, Roa, Yuha, Eunwoo, Rena, Kyulkyung, Yehana, Sungyeon, Xiyeon and Kyla. 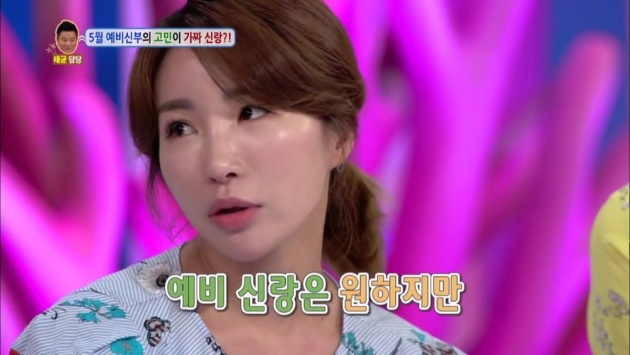 Well, another unique concern. I think it's common for someone to be obsessed with an actor or artist, but if he hurts himself just to be the same as his idol, is not that excessive? :D There is a saying, too much of everything is not good, and I am agree with it.

She said that her future husband copies Bae Jung-nam's accessories, hairstyle, and clothes. He even ask her permission to raise the same kind of dog which Bae Jung-nam has, even though she scared of the dog. After several unsuccessful attempts, he asked her to make a cut on his face around the eyebrow to match with Bae Jung-nam's face. When they're taking wedding photo, her future husband only cares about his photo and ignores her which looks like his individual photo. 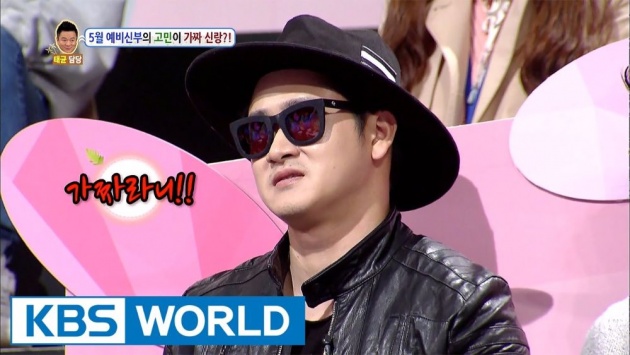 We meet with the fake Bae Jung-nam, Yang Taek-ki. He said that he copied Bae Jung-nam from head to toe, including his socks. He also said that he has started falling in love with Bae Jung-nam since he was 17 years old and admiring his body while he was in a fashion show, and since then he started to copy Bae Jung-nam. He also admitted that he deliberately wanted to make a cut around his eyebrow. He even practiced acting and imitating Bae Jung-nam's scenes though it's really short. He also bragged that he won in sport modeling competition, so he didn't understand why this is a problem. 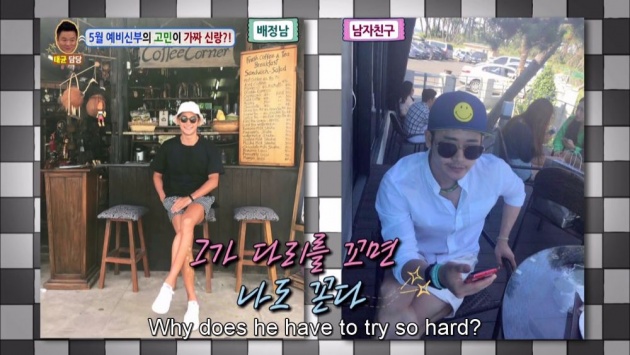 Yeah, I think he has a resemblance to Bae Jung-nam, but he has a bit chubby face, while Bae Jung-nam is a bit more gaunt. "Hello Counselor" then asked him to do a little bit fashion show on stage, and I think he looks good, he even showed his six packs abs :D In addition he also mimics a scene played by Bae Jung-nam. Though he says that he has practiced a lot for the scene, but meh, he looks bad :D 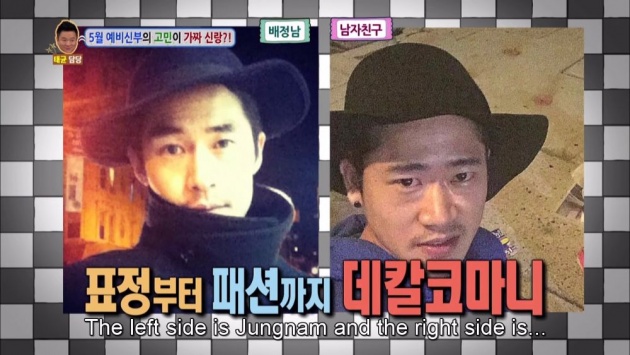 After some discussion, we found another problem. She said that her future husband is addicted to social media. He is always updated his page with his latest photos but he never upload his photos with her. He's the attention seeker type and feels like he's superstar. He is afraid that his follower will go down if they know that he will get married soon. 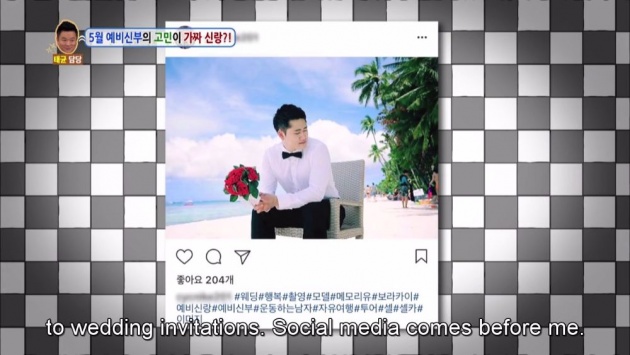 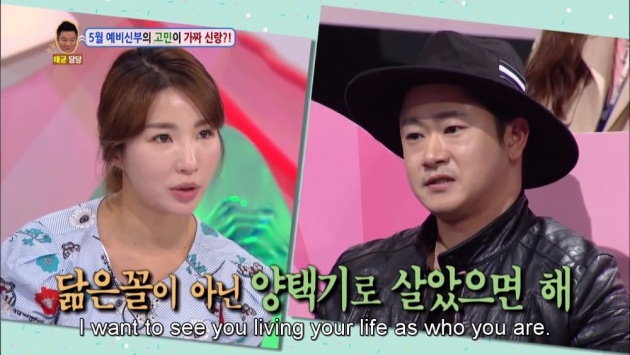 In the end, she just wants her future husband to be not too obsessed with Bae Jung-nam and be himself. She loves him and wants to marry him as a man named Yang Taek-ki not as fake Bae Jung-nam. She also wants him to be not too focused on his social media. The future husband seems to understand what his future wife wants. Moreover he also had the opportunity to talk with Bae Jung-nam through a video call and also get some advice from him. Looks like he will changes.

"A video call with the real Bae Jung-nam" 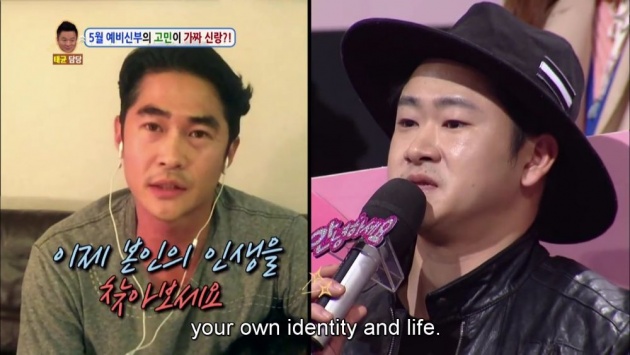 Overall, I would vote this matter as a serious concern. It is not a bad thing to have a role model but don't get too excessive that eventually get rid of your originality and your true self. It's good that they can sort their problem out before they get married so they can become a better couple later on. With this, she earned 112 votes out of 200 audiences. 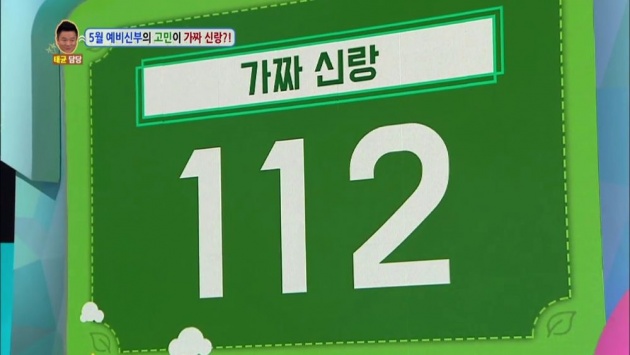 That's it my simple review about the first concern of "Hello Counselor" this episode, "A Fake Husband". I will discuss the other two concern on my next blog which is about "I Want to Smash It" and "I Beg of You". I hope you enjoy this boring blog and see you next time~ :D