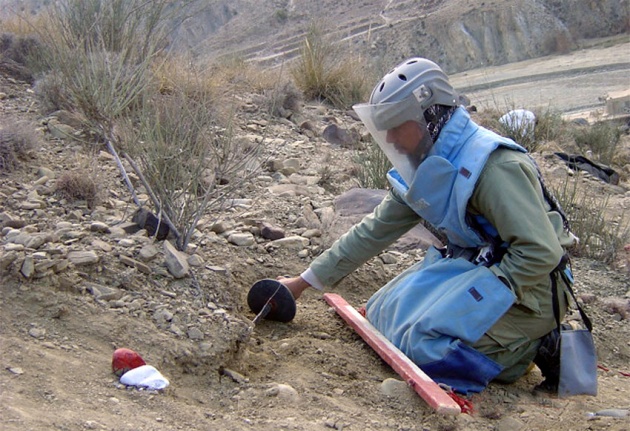 It is now about intensive de-mining efforts from Afghanistan to Bosnia & Herzegovina to Ivory Coast, and the United Nations took opportunity today to highlight efforts and how much more needs to be done. UN Secretary General Ban Ki-moon highlighted the work of United Nations mine action personnel around the world in preventing landmines and unexploded ordnance from causing harm long after conflicts have ended, and transforming danger zones into productive land.“Mine action programmes make an invaluable contribution to post-conflict recovery, humanitarian relief efforts, peace operations and development initiatives,” Mr. Ban said in his message to mark the International Day for Mine Awareness and Assistance in Mine Action. “Mine action sets communities on course toward lasting stability.”


Whether it is about building schools in Afghanistan or constructing homes in Bosnia or setting on course development and business in previously war torn regions of Africa, Asia, south America and Europe, clearing land mines is essential for physical safety and sense of security necessary for peace to advance. In many former conflict zones, as many or more are hurt/killed by landmines post conflict as they are during the conflict.

In December 2005, theGeneral Assembly declared that 4 April of each year shall be observed as the International Day for Mine Awareness and Assistance in Mine Action. The theme for this year’s Day asks people to “Lend your leg” in a show of support for landmine survivors, by rolling up their pant leg in a symbolic gesture of solidarity with landmine survivors across the globe that have lost limbs to landmines and unexploded ordnance.(Below is Continuing Message/Statement from UN News Centre)

Landmines and explosive remnants of war hamper development and endanger lives. Let’s eliminate them together for a safe sustainable world.

The UN is currently working closely with governments and non-governmental organizations in more than 40 countries to implement mine risk education and assist victims with disabilities.

In his message, Mr. Ban said that de-miners have been assisting in the management of stockpiles of landmines in Libya, Albania, Côte d’Ivoire and the Democratic Republic of the Congo (DRC). In Libya, thousands of explosive remnants of war have been secured or cleared from schools, roads or residential areas, and tens of thousands of people have received risk education. In the DRC, Albania and Côte d’Ivoire, mine action operators have been assisting in stockpile management over the past year.

“I call for universal adherence to these important treaties and for increased support for mine awareness and mine action,” he said. “Landmines and explosive remnants of war hamper development and endanger lives. Let’s eliminate them together for a safe sustainable world.”

The President of the General Assembly, Nassir Abdulaziz Al-Nasser, also called on countries to adhere to international treaties on this issue, and urged States to “provide assistance to countries affected by mines and explosive remnants of war,” stressing that the presence of these devices have serious humanitarian and economic consequences.

To mark the Day, a multimedia exhibition, entitled “UN Common Cause,” will open at UN Headquarters on Wednesday, featuring works by New York-based photographer Marco Grob, who travelled to Afghanistan and Cambodia to photograph mine victims for the UN Development Programme (UNDP) and the UN Mine Action Team (UNMAT), and Italian photojournalist Giovanni Diffidenti, who spent time documenting the work of the Joint Mine Action Team in Libya.

The exhibit will also display educational models of landmines, cluster munitions and other explosives, as well as videos providing a glimpse into the work of UNMAT.

UN missions around the world are also marking the Day.

The UN Interim Force in Lebanon (UNIFIL) held a ceremony at its headquarters in Naquora to mark the 200th point de-mined on the Line of Withdrawal – also known as the Blue Line – which demarcates the border between Lebanon and Israel.

As part of the observance, the Programme Manager of the UN Mine Action Support Team (UNMAST), Michael Hands, roller-skied from the city of Tyre to UNIFIL headquarters, where he was received by UNFIL’s Head of Mission and Force Commander, Major-General Paolo Serra.

Maj-.Gen. Serra underlined the importance of the Blue Line marking process as “an essential task of our mandate,” and added that “completing the process will reduce the potential for incidents and tensions in the area.” Since 2006, UNIFIL has de-mined 4.8 million square metres of affected land and destroyed more than 34,000 unexploded ordnance and mines in southern Lebanon.

In Iraq, the Secretary-General’s Special Representative there, Martin Kobler, drew attention to “Iraqi women, men and children who have lost their lives or limbs, who have become blind, or who cannot move freely because of landmines.”

“Today the United Nations joins Iraqis and Iraqi friends to call for an Iraq free of landmines by 2018,” Mr. Kobler said, referring to Iraq’s commitment in 2008 under the Ottawa Convention, to never again use, produce, acquire, or export anti-personnel mines. Iraq is one of the most mine-contaminated countries in the world, with unexploded ordnance covering 1,730 square kilometres, affecting one in every 20 Iraqis.

In Libya, the Secretary-General’s Special Representative there, Ian Martin, said that in addition to raising awareness among Libyans about the danger of mines and unexploded ordnance, the Day was also a day to remind the “international community that help is still needed.”

To dater, clearance teams have removed a total of 171,479 items of unexploded ordnance and conducted mine risk education for more than 130,276 people.

“What has been dealt so far with is just a fraction of the total contamination. Accidents continue to occur on a regular basis,” Mr. Martin said. “I hope the country and the international community will devote adequate funding and strong commitment to continuing the good work that has been started.”