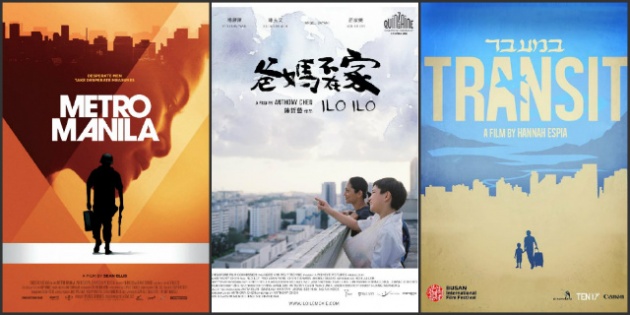 And finally, the Philippines, my homeland, submitted its Oscar Best Foreign Film contender.  The film is called "Transit" which won 10 awards at the Cinemalaya Independent Film Festival.  It's about overseas Filipino workers in Israel from director Hannah Espia who also took home the Best Director Award at Cinemalaya along with the Best Film trophy and Irma Adlawan for Best Actress.

The United Kingdom chose "Metro Manila" as its nominee, while Singapore picked "Ilo Ilo."  British director Sean Ellis helmed "Metro Manila" about  Oscar Ramirez, a country boy who left the province for the big city in pursuit of a better life.

"Ilo Ilo" is from director Anthony Chen and it tells the story of a Filipina domestic worker from the Philippines province of "Iloilo" and how she witnesses the trials and tribulations of a Singaporean family with the 1997 Asian financial crisis as a backdrop.

Here's the complete submission for the Best Foreign Language Oscars.  We will see if the Philippines scores a nomination when the official nominees are announced on January 16, 2014.  Good Luck!

Bosnia and Herzegovina - An Episode in the Life of an Iron Picker, directed by Danis Tanović (Bosnian, Romany)

Bulgaria - Colour of the Chameleon, directed by Emil Hristov (Bulgarian)

Dominican Republic - Who's The Boss?, directed by Ronni Castillo (Spanish)

Georgia - In Bloom, directed by Nana Ekvtimishvili and Simon Groß

Iceland - Of Horses and Men, directed by Benedikt Erlingsson (Icelandic)

Latvia - Mother I Love You, directed by Janis Nords (Latvian)

Norway - I Am Yours, directed by Iram Haq (Norwegian, Urdu)

Spain - 15 Years Plus a Day, directed by Gracia Querejeta (Spanish)

Venezuela - Breach in the Silence, directed by Luis Rodríguez and Andrés Rodríguez (Spanish)