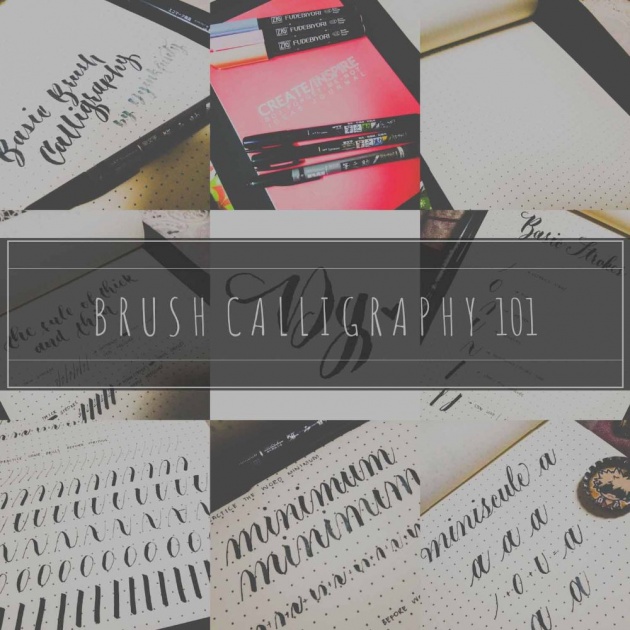 Just a quick run through, in the 1st part of my tutorial, I’ve mentioned what materials you should use (Imparted my personal picks especially for beginners). Also, I’ve started with the Basic rule in Calligraphy which is the “Thick and Thin” rule. I hope you got it clear back there, but if you have questions, please don’t hesitate to ask and put your concerns in the comment section.

Now let’s proceed on the next step in learning Basic Brush Calligraphy.

I’ve mentioned on my previous blog that Calligraphy differs from our normal handwriting through the “thick and thin” and through the stokes. In our normal handwriting, we write smoothly and free-flowing, while in Calligraphy every letter is formed by every stroke. My virtual mentor, Ms. Nina Tran elaborate these strokes not just for Engrosser Script but it was intended for minuscule letters (aside from freehand fonts though). 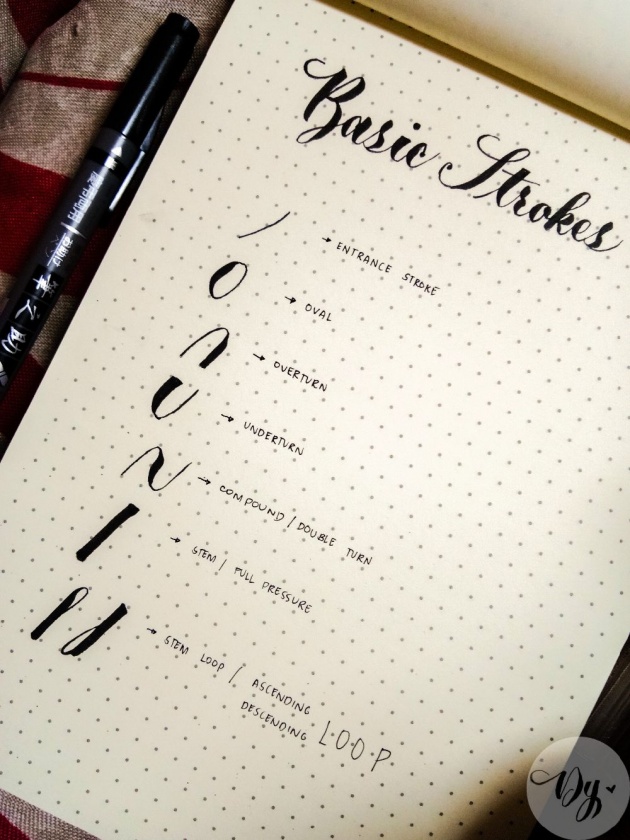 Here’s a video of how to accomplish the basic strokes:

Video Credits: The Happy Ever Crafter via youtube.com

Now we learned what materials should we use, the rule of “Thick and Thin” and the basic strokes, you probably think that we’re ready to do the writing now. But hold up! There’s still one thing to do before we proceed in writing words, and that is doing drills. 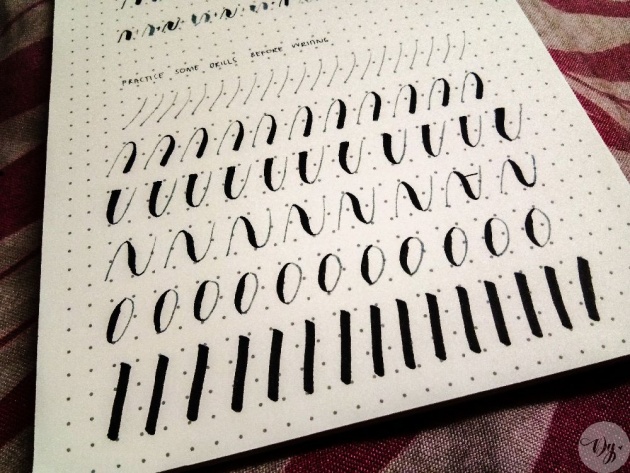 I used to hate drills, no kidding. I really thought that it is just a waste of time. Back then when they told me to do drills, I keep on uttering to myself “Can we just proceed with the writing already? This is so boring and exhausting”, at that time I didn’t able to grasp the importance of drills. I always neglect it. But when my virtual mentor, Ate Nina did a live broadcast in Periscope doing drills before writing, it made me have patience in doing drills (I thought “I’m doing this because my virtual mentor says so”.) But as time goes by, little by little I was able to appreciate and see the importance of doing drills. Even though she always insists on doing drills in her pointed pen tutorials, I believe that this also applies in Brush Calligraphy. 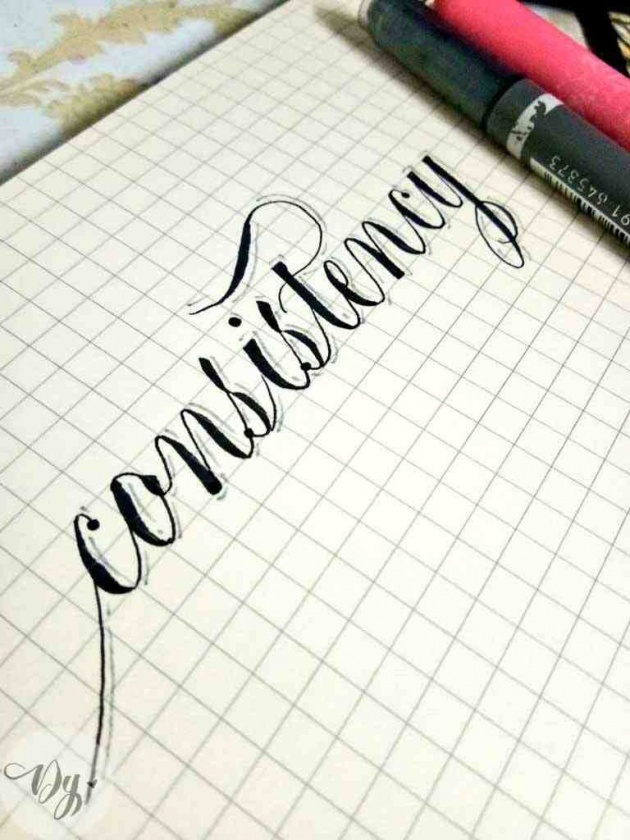 This is one of the benefits upon doing drills. It gives us consistency. If you tried writing spontaneously without having drills first and you are a beginner, you’ll notice how your strokes and even your font looks like. Disastrous, as I described mine whenever I feel so lazy doing drills. For someone who has a shaky hand, I really need drills to exercise my hands.

To be honest, it’s not every day where I was able to write or to do drills so whenever I have a free time to write, I a lot a couple of minutes in exercising through drills. Repeating the basic strokes are my usual drills, in this way I can also criticize and study my own stroke (It is also a good way to see your progress). It’s good to have even just 30 minutes of your time to practice every stroke as you have your drills.

Okay, so we’re getting there! We’re getting there! We’re about to write real words, finally! So, after doing drills, it’s basic for us to learn every single letter in the alphabet using the basic strokes. (Now is the time to put into practice what we learned earlier, but please be good to yourself as well). It’s a good practice to learn the alphabet one by one before you write random words. 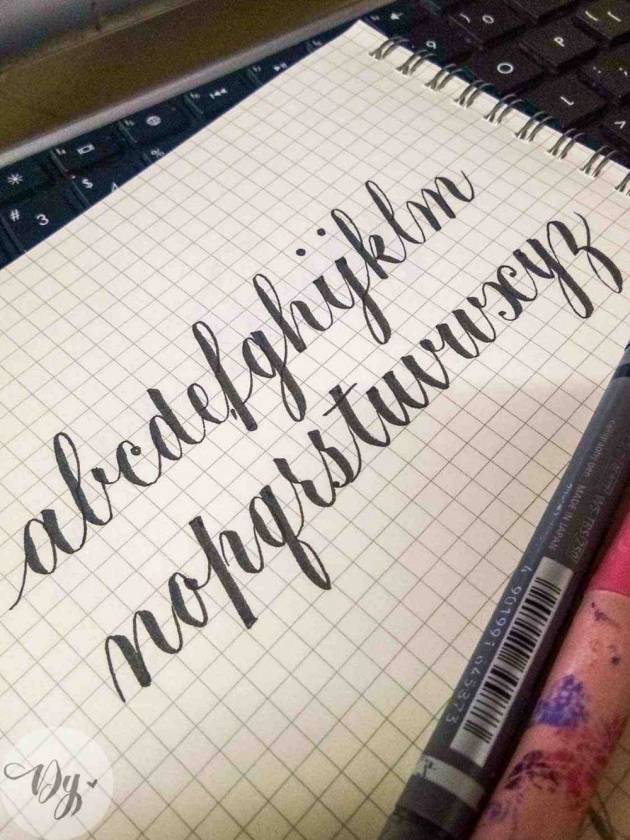 How important it is to master the alphabet using the basic stroke? VERY IMPORTANT. Do you imagine wanting to write so bad and don’t know how to accomplish it? It’s terrible. But don’t be fret, upon mastering the Basic strokes, it will be just easy for you to familiarize yourself with the alphabet. And for sure it will help you a lot when you got started writing the words in your mind.

Let me help you with the some few letters to get done with. Let’s dissect the minuscule letter “a”, “g” and “h”. I personally choose these 3 letters because by just doing these 3 letters, we can already use all the basic strokes.

I always wanted to write the minuscule “a”, maybe because it’s a generic letter. Most words that we used consisted of the letter “a”, so I thought that it is essential for us to study it more. 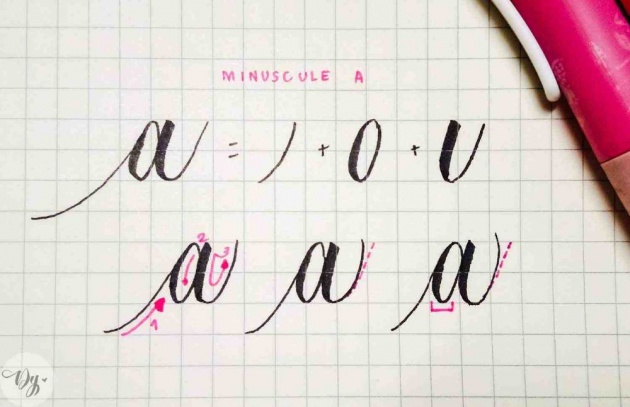 In creating a minuscule “a” we need to use 3 of the basic strokes, the first step is to make an Entrance stroke, then perform an oval and end it with an underturn. Basic right? As easy as 123 do you think? I suggest you repeat it and practice it for a couple of time to fully familiarize your hands with the letter itself.

Letter “g” is not that generic like letter “a”, but it is often used on adjective words. Although we do not usually use the letter “g”, I personally choose this letter for us to familiarize ourselves with the stem-loop (descending). 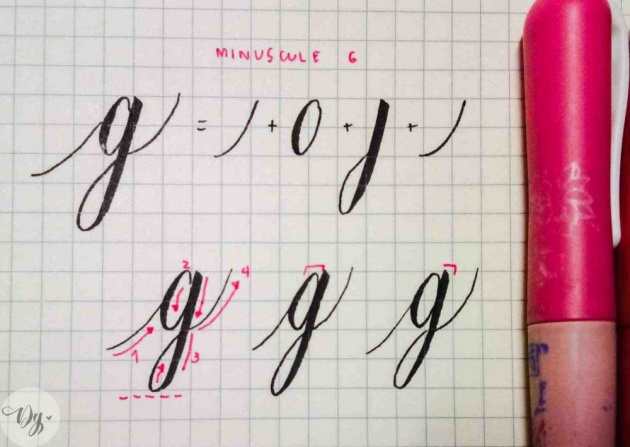 Upon writing the letter “g”, we might start it with an entrance stroke then make an oval and end it with descending stem-loop. (To be honest, Stem and Stem loops are my greatest weakness in basic strokes, I just can’t master it, especially the degree of the stem itself. Ughhh). 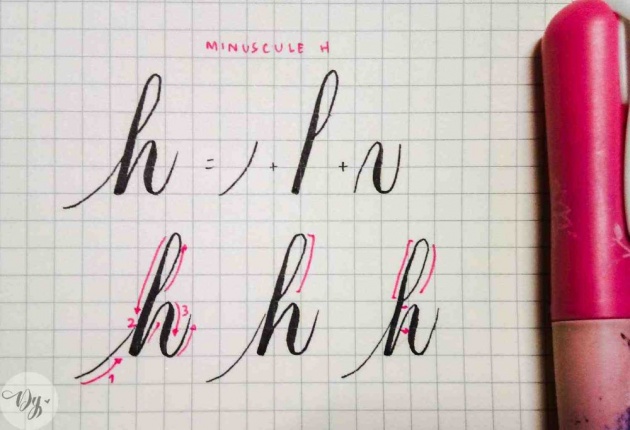 To create a minuscule “h”, we should start by creating an entrance stroke, continue it ascending stem-loop and combine it with a compound or double turn. What I find challenging here is the height of the compound stroke, it should not meet the turning point of the loop or else they will clash.

Okay, so let’s get into writing already!!! First to practice is the word “minimum” 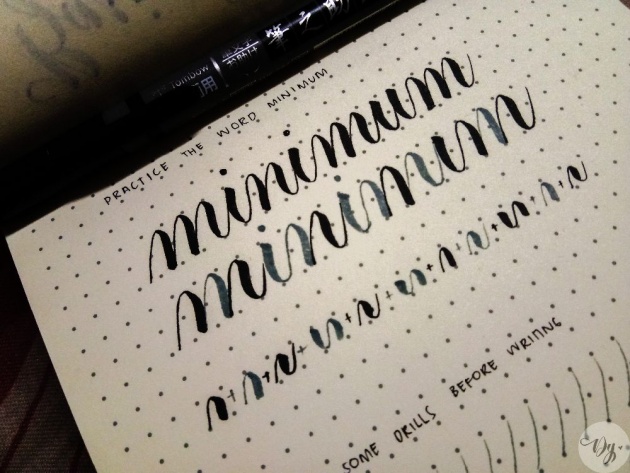 Of all words why minimum? I actually don’t know too. (Kidding aside) Minimum because it has a repetitive letter, I can recall that this is not just used in Brush Calligraphy, but also in Pointed pen Calligraphy and Blackletter Calligraphy.

Minimum is a repetitive stroke of Overturn, Underturn and Compound/ Double turn. Who would have known that in just 3 basic strokes you can already create a word? Now, let’s chop every letter in the word minimum.

Here’s the stroke by stroke process on how to achieve the word minimum: 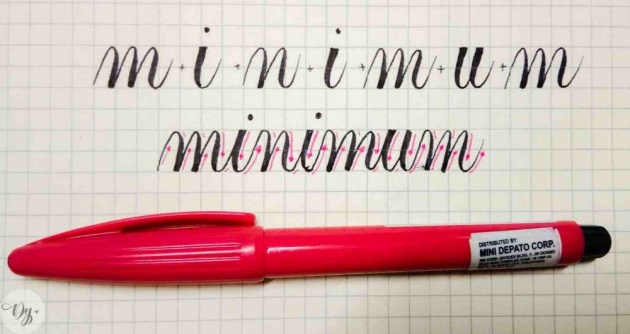 And I guess that’s it, I remember having too much fun practicing this word. It’s just relaxing, how smooth it is to repetitively practice the said strokes. After many attempts, I’m sure you’ll be able to gain your confidence in writing your first word or maybe your first sentence as a whole.

Here's a quick video of me writing the word "minimum"

Then there you have it, let’s have a quick run through of the process in learning the Basic Brush Calligraphy.

I hope you all learn from my little knowledge in Brush Calligraphy, and I’m hoping to see your works in the future.

Thank you for reading! Have a great day!

LEARNING THE BASIC OF BRUSH CALLIGRAPHY

I often got asked where did I learn Calligraphy, and most of them cannot believe that it was just th…

Image Credit: Caryl Keenvia Bitlanders I've been into Hand Lettering and Calligraphy since I was in …