The United Nations envoy for Libya has proposed the formation of a national unity government, after months of difficult talks.

Since 2014 Libya has had two rival parliaments - an Islamist-backed one in Tripoli and an internationally recognised government in the east.

However, several MPs on both sides of the divide have described the latest announcement as premature.

Both parliaments must back the deal.

UN envoy Bernardino Leon told a news conference in Morocco that Fayez Sarraj would be nominated as prime minister.

Abdulsalam Bilashahir, of the Tripoli-based General National Congress (GNC), told the BBC: "We are not a part of this [proposed] government. It means nothing to us and we were not consulted."

Ibrahim Alzaghiat, of the House of Representatives (HoR), based in Tobruk, said: "This proposed government will lead to the division of Libya and will turn it into a joke. Mr Leon's choice was unwise."

MPs from rival camps appear to be finding rare common ground over their dismissal of the UN proposal, saying it is premature.

The rival parliaments have not even accepted the political agreement that embodies the proposed unity government, so announcing the names appeared rushed.

The UN pushed for it because there were still objections to the wider deal and mediators worried that talks would collapse.

But there is a danger that this latest move will backfire. Civilians are frustrated with the dangerous and chaotic realities ruling their lives. It is unlikely they are waking up more hopeful today.

Why is Libya lawless?

Who wants what in Libya?

However, Mr Leon said he believed that the list of proposed ministers for the unity body "can work".

Speaking in the Moroccan city of Skhirat, where the talks have been taking place, Mr Leon said: "After a year of work in this process, after working with more than 150 Libyan personalities from all the regions, finally the moment has come in which we can propose a national unity government,"

"All of them will work as a team," he added.

Other posts in the proposed government include three deputies for the prime minister to represent Libya's east, west and south.

Areas of Libya are still controlled by rival militias

One of the proposed deputy prime ministers, Mussa al-Kouni, said: "The hardest part has just begun."

A loose alliance of militias, including Islamists, seized the capital, Tripoli, in August 2014 and reinstated the GNC, forcing the existing and internationally recognised government to flee to the eastern city of Tobruk.

Libya's politicians have faced increasing pressure from the West to reach agreement on a unity government.

Libya has suffered years of unrest since the overthrow of dictator Muammar Gaddafi in 2011.

The violence and political chaos have allowed Islamist militants to gain ground in Libya and also seen human traffickers use the Libyan coast to send tens of thousands of migrants across the Mediterranean to Europe. 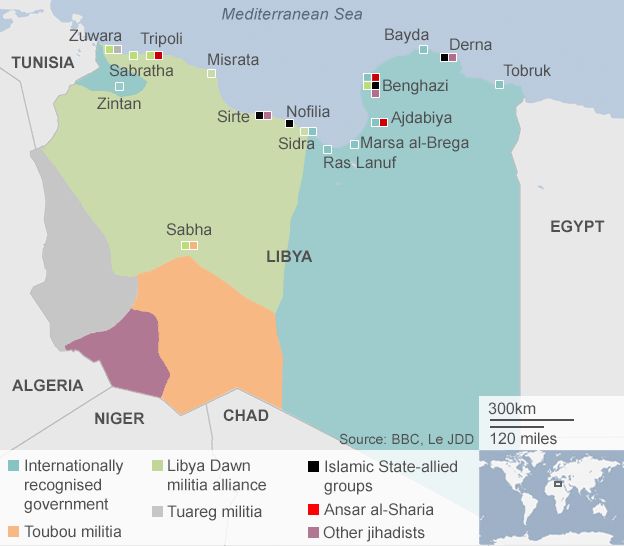 After the withdrawal of Libyan leader Muammar Gaddafis forces from Benghazi, a female rebel fighter …

Omar Mukhtar, Emir of the Mujahideen of Libya, headed jihad against Italian invaders in the 1920-193…

The Sahara, which is the largest desert of the world, covers more than 25% of the total area of Afri…