Lilith a film by Eric Chang, Nominated for 5 Awards Including Best Film at The International Fashion Film Awards 2013 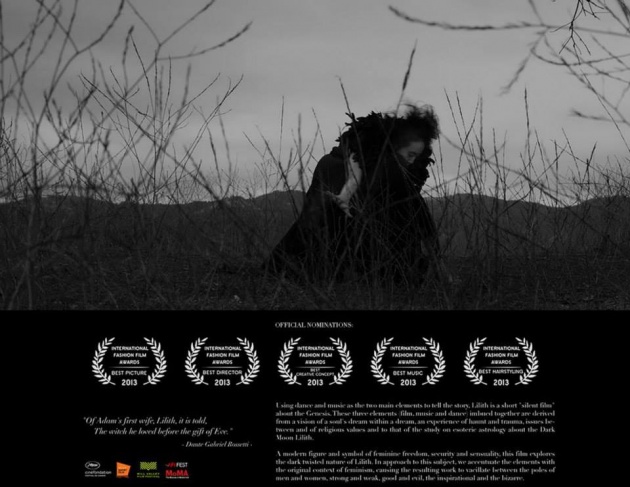 As I scrolled through the different categories, several films jumped out at me as they were nominated in several categories. I chose to watch Lilith, a film nominated for five awards, which included, Best Picture, Director, Creative Concept, Music and Hairstyling. Although it was not nominated for Best Fashion, clothes worn were by renowned edgy and dark designers Gareth Pugh and Rick Owens.

The opening scene of this film starts off with a quote by Dante Gabriel Rosetti, “Of Adam’s first wife, Lilith, it is told The witch he loved before the gift of Eve.” The screen then fades out, and opens to a scene in the woods, where a woman, who we come to identify as Lilith, dances across the plane. She then comes into contact with a black figure that upon closer inspection, reveals Adam. The choreography of the film is contemporary, dark and original, depicting what the director describes as “The Genesis…a vision of a soul’s dream within a dream, an experience of haunt and trauma, issues between and of religious values and to that of the study on esoteric astrology about the Dark Moon Lilith.”

Through two different settings, both in the autumn forest, the story of Lilith and Adam is told through spectacular choreography, identifying very clearly “the poles of men and women, strong and weak, good and evil, the inspirational and the beautifully bizarre.” The playful dance slowly turns into a fight, where evil witch, Lilith, kills Adam by taking his soul away. The video ends with Eve appearing, nursing Adam back to life.

The concept of the film is engaging, and unlike most mainstream and commercial fashion films, it was refreshing to see a short film with its main objective being to feature a storyline through dance, as opposed to the fashion product at hand, usually illustrated with a model dancing or walking in slow motion in front of a stunning background (for example, and only because this is the next video I had decided to watch randomly, which interestingly is a video whose main objective is to sell the music: MT Warning - Forward Miles, also nominated for Best Picture). Such films definitely do capture the movement of the clothes well, however, in terms of content of the film and creative concept, Lilith still has my vote. This film has my nominations, particularly for Best Creative Concept and Music.